“Only one and a half”: Medvedev calculated the options for the development of events in Ukraine 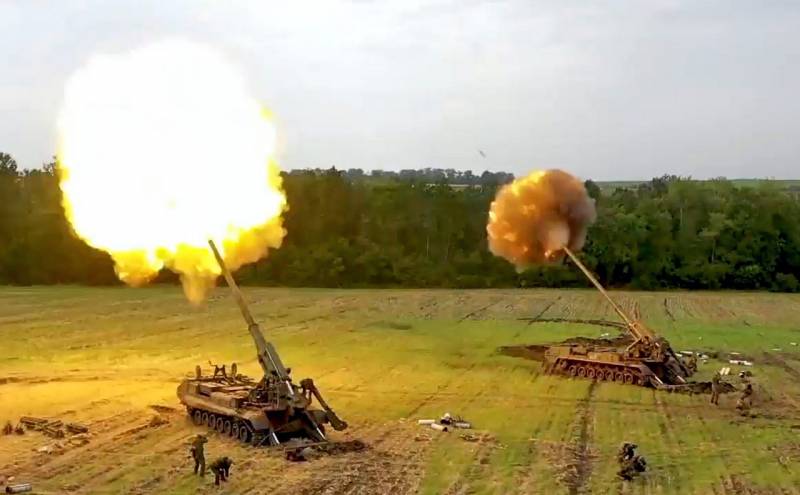 Deputy Chairman of the Security Council of the Russian Federation Dmitry Medvedev on Thursday, August 25, in his Telegram channel, listed the options for the development of events in Ukraine. His post in the messenger was a kind of response to the publication of The Guardian newspaper. True, the columnist for the British publication Dan Sabbah suggested as many as five ways in which the confrontation between Moscow and Kyiv could go in the future, and the Russian politician - "only one and a half."

The deputy chairman of the Security Council of the Russian Federation at first hinted that the "collective West" was simply wasting time and effort, arguing about the continuation of the Russian military special operation in Ukraine.

Analysts of all stripes are practicing forecasting the Ukrainian conflict. Here The Guardian came up with five pieces. Forecasts of victory are being built in Kyiv and in the Ukrainian-affiliated countries of the West. In fact, all this is pure lies and demagogy for the treatment of the electorate. Everyone understands everything. But they work out the roles
Medvedev wrote.

In his opinion, "there are only one and a half scenarios." Thus, according to the first, a special military operation ends after the achievement of all previously set goals by Moscow, and in Kyiv the result is unconditionally accepted.

The second is a military coup in Ukraine, and only then the recognition of the results of the special operation. That's all the options
Medvedev summed up.

“And I have five reasons for this…”

A day earlier, on Wednesday, August 24, The Guardian published an article by the editor of the department of defense and security Dan Sabbah "Five predictions for the next six months on the war in Ukraine." However, the title turned out to be more of a clickbait. There are no forecasts as such in the material (certainly they are not there in the declared amount). The author only lists the factors that in the next six months can significantly worsen the situation of the Kyiv regime.

The first thing Sabbah points to is the intensity of the fighting. He believes that the conflict is dragging on and at this pace can continue for a long time. At the same time, none of the parties shows readiness to start negotiations.

British newspaper journalist "does not open America" ​​to readers. The unwillingness to sit down at the negotiating table with enviable regularity is being talked about by a variety of Ukrainian statesmen. Here, for example, is what Mikhail Podolyak, adviser to the head of Vladimir Zelensky's office, said on the air of a program on the YouTube channel of the Latvian portal Rus.lsm.lv:

This is a pointless negotiation process, because we have a public consensus that we cannot afford to leave Russia in this or that part of the country. Therefore, Ukraine is interested in the most cruel displacement of Russia from our borders. And our borders are fixed - both Donbass and Crimea fall here. Therefore there is no ground to negotiate
The second “forecast” is that Ukraine does not have the means for an effective counteroffensive. Sabbah, citing a high-ranking official, claims that Zelensky would like to return Kherson.

Kyiv has switched to a strategy of firing long-range missiles and spetsnaz raids on Russian bases behind the front lines. But it is unlikely that this will lead to the fact that Russia will cede Kherson
the columnist writes.

The third factor is the low pace of the Russian offensive. Sabbagh notes that the Kremlin's desire to move forward is still there.

Russia now holds large tracts of Ukrainian territory in the east and south and is actively talking about holding referendums. With cooler weather rapidly approaching, she [Russia] will likely focus on consolidating what she has
— says the author.

In turn, Russian Defense Minister Sergei Shoigu called the slowdown in offensive operations "conscious." At a meeting with colleagues from countries participating in the Shanghai Cooperation Organization on August 24, the head of the Russian military department explained why such a "slowdown" is beneficial to Moscow. Shoigu once again reminded that the Russian side strictly observes the norms of humanitarian law. The strikes are carried out with high-precision weapons at the objects of the military infrastructure of the Armed Forces of Ukraine - command posts, airfields, warehouses, fortified areas, objects of the military-industrial complex. At the same time, everything is done to avoid casualties among civilians. It is precisely this tactic that, of course, slows down the pace of the offensive, but the command of the RF Armed Forces is deliberately doing this.

Also, according to Sabbah, Russia expects "General Frost" to come to their aid soon. With the onset of winter, the situation may noticeably worsen not only in Ukraine, but also in Europe (probably, another two millionth wave of Ukrainian refugees will pour into the countries of the Old World).

But not only in Moscow are counting on "General Frost". The Armed Forces of Ukraine are trying to strike at those facilities, the elimination or disabling of which will lead to problems with heating in the territories liberated from the Kyiv regime.

Spring, however, could be the time to renew the attack - each side will want to resupply and prepare for what is likely to be another fighting season.
Sabbah adds.

The fifth forecast in the material is a kind of “anthology of questions” that the author is not going to answer. He points to the double standards by which the West continues to live. The journalist draws attention to the duality in the behavior of the allies:

Policy talk about the need to push Russia to the pre-war borders, but do not provide enough equipment
At the same time, due to the special operation, the budget of Ukraine is experiencing a deficit of $5 billion. There is no mention of restoration at all. Sabbah notes that many houses to the northeast and northwest of Kyiv still remain in ruins. Desperate residents live in garages or temporary buildings in the surrounding area.

Western countries need to decide if they want Ukraine to win or just hang on
- summarized in the article.

Thus, The Guardian material contains, in fact, a statement of well-known facts. There are only two forecasts. First, there will be no significant changes in Ukraine in the next six months (slowly but surely, the situation in Kyiv will worsen). Second, things will move faster next spring. But this is only if none of Medvedev's "one and a half" scenarios work.
Reporterin Yandex News
Reporterin Yandex Zen
13 comments
Information
Dear reader, to leave comments on the publication, you must sign in.