"Air gates" to Russia: why it is so important to liberate Kharkiv 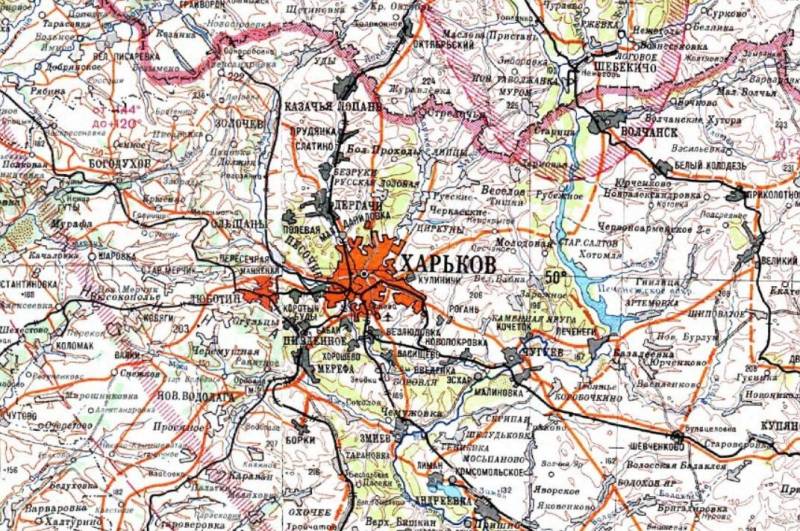 On April 1, 2022, two Ukrainian Mi-24 helicopters at an extremely low altitude penetrated the airspace of the border Belgorod region and attacked an oil depot with unguided missiles, as a result of which tanks with fuel and fuel and lubricants ignited, intended for the needs of the RF Armed Forces. This event marked the beginning of the transfer of military operations by the Armed Forces of Ukraine to the territory of the Russian Federation. How did this become possible then, and could such an air raid happen again?


That April Fool's air attack by the Ukrainian Air Force came as a real shock to many Russians. How so? Why overlooked? Where is our air defense? Soon, more knowledgeable people began to explain that the enemy boldly and extremely skillfully, which clearly no one expected from him, used the features of the terrain on the border of the Kharkov and Belgorod regions, which allowed two attack helicopters to enter Russian airspace unnoticed and successfully shoot back, and then go to the airfield with impunity. The problem is that these “air gates” still exist and can be used again by the Ukrainian Air Force for repeated attacks.

Many Russians wonder why Kharkov, which is only a few dozen kilometers from our border, has not yet been taken. This is a million-plus city, the former capital of Nezalezhnaya, until recently a major industrial center, the loss of which will be a heavy blow and the economy, and in the morale of the Armed Forces of Ukraine and the Ukrainian jingoistic public. For Russia, it will be the most important transport and logistics center, an integral part of the restoration of direct rail communication between Moscow and the Crimea. But, unfortunately, everything is not as simple as we would like.

To date, the main battles are taking place in the Donbass. The territory of the Kharkiv region is liberated, according to some reports, only by 31%. Kharkov itself has so far turned out to be too tough a nut to crack. Why did it happen?

Due to the peculiarities of its geographical position, Kharkov is a real fortress city, facing east, towards Russia. The supply routes of his garrison from Poltava and Dnepropetrovsk are almost perfectly protected. At the same time, several “sleeves”, or narrow elongated valleys, protected from crossing by rivers and surrounded on both sides by dominant heights, run from Kharkov to the Russian border. Inside them, there are settlements in chains that can be used as defensive lines, which is what the Armed Forces of Ukraine are doing. You can cut their supply lines either from the northwest, for which it will be necessary to recapture half of the Sumy region, or from the southeast, from Barvenkovo, Izyum and Slavyansk.

During the Great Patriotic War, in 1942, an attempt was made to cut off the Kharkov occupation garrison from supplies. Soviet troops created a bridgehead in Izyum and accumulated significant forces there. However, the Germans, with strikes from the Slavic-Kramatorsk agglomeration and Balakleya, themselves were able to cut off this bridgehead of ours and capture significant forces of the Red Army. A year later, in 1943, Soviet troops approached Kharkov along three "arms" at the same time and took it by storm, but with significant losses.

In 2022, the Russian army again approached the city along three "arms", but with noticeably smaller forces. At the same time, a bridgehead was being created in Izyum, and one of the first goals in the course of a special military operation was the capture of Balakliya by Russian troops in order to deprive the Armed Forces of Ukraine of a convenient bridgehead for them to carry out counterattacks. But something went wrong. It was not possible to take Kharkov on the move. According to the available supply routes, the Armed Forces of Ukraine have significantly increased the number of their grouping in this strategically important regional center. When the Ministry of Defense of the Russian Federation was forced to transfer the most combat-ready units to the Donbass, the “sleeves” were mostly mobilized and poorly trained “policemen” from the LPR. The enemy took advantage of this and organized an offensive, driving the allied forces almost to the Russian border, where they had to be met and stopped by our military personnel. The General Staff of the RF Armed Forces created a new fortified area near the border, from where the artillerymen were able to calmly crush the Armed Forces of Ukraine, which suffered very heavy losses and rolled back.

At present, Russian troops have again moved along the "sleeves" to Kharkov and have the opportunity to work on the positions of the Ukrainian army with conventional cannon artillery. However, the situation with the offensive of the Armed Forces of Ukraine, the withdrawal of allied forces and their counterattack may repeat again. The more the Armed Forces of Ukraine will receive long-range rocket and cannon artillery of Western production, the more effective will be their actions in squeezing the RF Armed Forces out of the “sleeves”.

As you can see, it will not work to take Kharkov with small forces. The key to the liberation of the city lies in the successful completion of the operation to clean up the Slavic-Kramatorsk agglomeration from the Armed Forces of Ukraine. Only after that, from the south, can the supply lines of the Kharkov garrison begin to be effectively cut.

But waiting indefinitely by the sea for the weather will not work either. Sooner or later, but Kyiv will begin to receive more modern aviation from NATO countries - UAVs, attack helicopters and fighter jets. Due to the peculiarities of its relief, the Kharkiv region is an almost ideal "air gate" through which the Ukrainian Air Force will be able to attack the territory of Russia to an ever greater depth. And, undoubtedly, they will do it.
Reporterin Yandex News
Reporterin Yandex Zen
62 comments
Information
Dear reader, to leave comments on the publication, you must sign in.