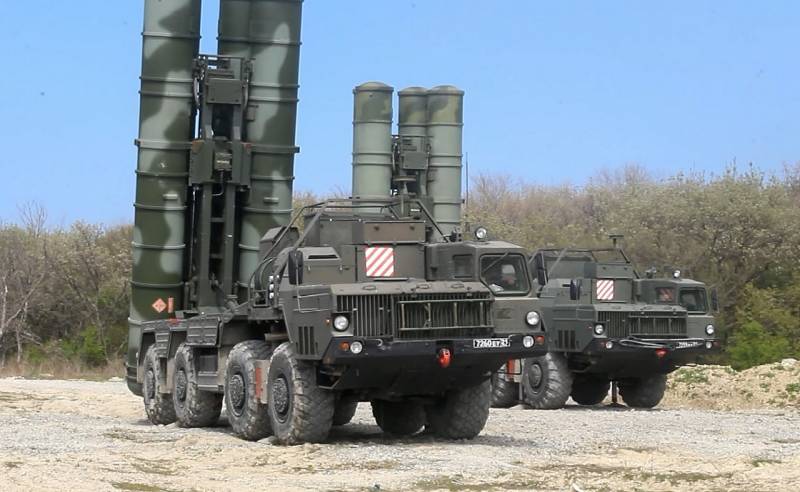 A few days ago, a contract was signed for the supply to Turkey of the second regiment of Russian S-400 anti-aircraft missile systems. This agreement, which quarreled between Ankara and Washington a few years ago, is considered a big geopolitical victory for the Kremlin. But will the transfer of such highly effective weapons to a country that is a member of the NATO bloc eventually turn against Russia itself?

Reports of negotiations on the possibility of acquiring the S-400 began to arrive as early as 2016. Turkey, with its colossal geopolitical ambitions, is striving in every possible way to switch to nationally produced weapons - its tanks, helicopters, corvettes, frigates and submarines, UDC and aircraft carriers, fifth-generation fighters, etc. Work is actively underway to create Turkish air defense systems, in which Ankara does a lot succeeded. However, long-range air defense systems are a technically extremely complex product, so the Turks went the "Chinese way" of acquiring, studying and trying to copy competitors' weapons.

Russian S-400 complexes are quite possibly the best in their class. They allow you to destroy air targets of all types, including even promising hypersonic ones. The Triumph early warning radar sees a target at a distance of up to 600 kilometers, 40N6E ultra-long-range missiles can destroy aerodynamic targets at a distance of up to 400 km. Our S-400 is capable of shooting down low-flying targets at a height of 5 meters. For comparison: the over-hyped American "Patriots" have a minimum height of defeat of 60 meters. In general, "Triumph" is really an excellent example of domestic engineering.

It is not surprising that the Turks wanted to buy it, but there were two "bottlenecks": the high price - $ 500 million for a division of 4 cars, as well as the fact that Turkey is a member of the anti-Russian NATO military bloc. However, all these problems were surprisingly easily resolved.

The total amount of the contract was 2,5 billion dollars, while Ankara pays only 45%, and the remaining 55% is provided by Moscow itself in the form of a targeted loan. At the same time, information was leaked to the press that the Turkish partners insisted on localizing the production of Russian air defense systems on their territory, at least partially. As of 2017, Vladimir Kozhin, Assistant to the President of the Russian Federation, regarding the transfer of technologies stated the following:

The issue of transferring technology for the production of S-400 anti-aircraft systems to Turkey is not being discussed.
In 2021, President Erdogan said that Moscow and Ankara agreed not to make any statements regarding the prospects for joint production of the S-400 in Turkey, since this topic is very "sensitive":

As for the joint production of S-400 parts, both sides - Turkey and Russia - agreed not to disclose any details.
Regarding the fact that the most modern air defense systems at the moment are being transferred to a potential enemy from the North Atlantic Alliance, the domestic press explained that this is a very subtle geopolitical game designed to tear Turkey away from the United States and other European vassals. And indeed, Ankara and Washington had a quarrel!

The "Hegemon" was so angry that he excluded Turkey from the program for the joint production of the fifth generation F-35 fighters, which President Erdogan counted on in the F-35B modification as carrier-based aircraft for his two universal landing ships, already built and planned, as well as for promising aircraft carrier. It turns out that victory, comrades, once again outplayed the adversary on his own territory?

Unfortunately, everything is not so simple. The cunning "sultan" waited until the collective West needed his services again, and then took his own. Against the backdrop of a special operation being carried out in Ukraine, Finland and Sweden hastily joined the NATO bloc. In exchange for its approval, Ankara knocked out serious concessions on the Kurds from its “respected partners”, as well as US permission to purchase 40 Lockheed Martin F-16V Block 70 Viper fighters for $6 billion, plus 80 upgrade kits for the F fighters already in service with the Turkish Air Force. -16 Block 70. Knowing the "sultan", there is no doubt that he will bargain with the "hegemon" and F-35B fighters for his fleet when the interests of the United States and Turkey in the region coincide.

It is interesting that today the Americans are not too worried about the transfer of another batch of S-400 air defense systems by Russia. Currently, work is underway in the United States on the latest AN / ALQ-249 electronic warfare station, designed for carrier-based electronic warfare aircraft EA-18G Growler of the US Navy. They are purposefully created to counter the Russian S-400 missile defense / air defense systems and the Chinese HQ-9, interfering with their radars and creating a false illusion about the real location of an air target. Why are we talking about this?

Because the American specialized publication Military Watch wrote the following about this:

Russia itself declassified its missile defense system to NATO by selling S-400 to Turkey. Nothing will prevent the Turkish government from transferring these schemes to the United States. This will not harm Ankara's defenses, because it is not going to use the S-400 against the American EA-18G Growler, but against other aircraft.
An interesting point of view, isn't it? However, Russian military experts reassure that in any case, a "stripped-down version" of the S-400 air defense system went for export to Turkey, where, with almost the same hardware, the software algorithms of operation were seriously changed. Probably, protection against hacking is also provided. One can only hope that no "superhackers" from somewhere in Ukraine who had anything to do with the military-industrial complex are able to hack it.
Reporterin Yandex News
Reporterin Yandex Zen
15 comments
Information
Dear reader, to leave comments on the publication, you must sign in.