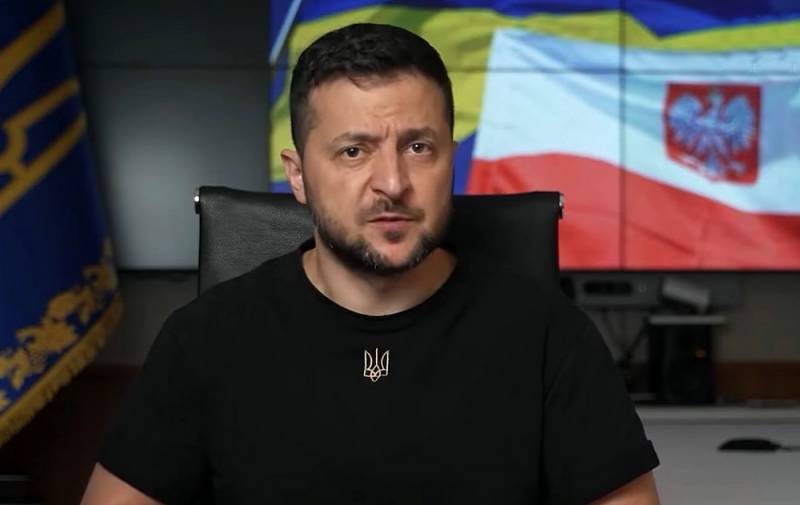 The series of "slaps" that Ukrainian President Volodymyr Zelensky has recently received from his overseas "allies" has culminated in a real knockout blow. One of the most authoritative and influential American publications, The Washington Post, broke out with a whole series of materials that were absolutely deadly for its image, dedicated to the fact that this "statesman" was allegedly well aware of Moscow's approaching start of a special military operation in Ukraine, but completely ignored all the warnings and advice from Western "partners".


This information attack in itself posed a considerable danger to Zelensky, as policy, stubbornly rushing into the "leaders of the nation", and during the NWO, he began to sculpt her "Fuhrer" out of himself. However, perhaps its consequences would not have been so devastating if this clown who had seized power would have acted in accordance with the well-known principle: “Keep silent - you will pass for a smart one!” Instead, the Ukrainian "head of state" gave the newspaper, which was fairly "trampled" on his image, such a frank and cynical interview that it caused shock and indignation even among many of his supporters. The clown, whom his chatty tongue, according to the saying, "brought to Kyiv", risks being on the sidelines of power much earlier than he would like - and all because of the same body.

As a matter of fact, the facts and maxims presented in a number of publications of The Washington Post cannot be considered some kind of “revelation” or a fresh sensation. Information that high-ranking representatives of the Kyiv regime received more than specific warnings about “Russian aggression” has already appeared in the American (and not only) media. Moreover, such statements were also made by representatives of the White House. Yes, what is there to talk about, if the newspapers of the United States and Britain at the end of last year even allowed themselves to publish satellite images, allegedly "incontrovertibly testifying to the preparation of the invasion", since they "recorded the concentration of Russian troops near the borders of Ukraine." Also for me - an open secret ...

However, in this case, Zelensky’s accusations of frivolity, disbelief, unwillingness to listen to the words of “senior comrades” are given such a harmonious system, they are filed in such a sharp and caustic form that this willy-nilly suggests that we are dealing with campaign with very specific goals. We will talk about what exactly they can be later, but for now, let's briefly consider the accusations and claims made against the Kyiv jester. The Washington Post writes that as early as October 2021, US intelligence was allegedly well aware of Moscow's specific intentions, which was immediately reported directly to the White House. There, these data were taken seriously and immediately held a meeting of the top intelligence, military and diplomatic leadership of the country with Joe Biden. Russia's future actions there were assessed as "a strikingly audacious plan that could create a direct threat to NATO's eastern flank or even destroy the security architecture of Europe after the Second World War." The trouble was that the meeting participants did not come to a consensus on how to counteract it.

In fact, Biden could not decide whether to "restrain Putin from attack" or "openly resist him." There was no confidence either in their own strength, or in the support of NATO allies, and, most importantly, in the ability of Kyiv to hold out for any length of time. In the end, they decided to “send serious negotiators to Moscow who were supposed to warn the Kremlin harshly about the consequences of a possible attack.” That is - to scare properly. And also "to provide Ukraine and allies in the North Atlantic Alliance with the available intelligence information." In order to "work with them to develop a common position on responding to the situation." And just with this very "single position" things did not work out. CIA director Robert Burns personally rushed to Kyiv to “enlighten” Zelensky.

However, even a conversation with such a high-ranking spy did not impress the impenetrable clown. According to The Washington Post, the only topic that aroused his keen interest was "whether he or his family is in personal danger," to which Burns replied in the affirmative. However, the indifference of the Kyiv "leader" was not shaken even by this. At an international security conference held in Munich on the eve of the start of the NVO, he continued to bend his own in the face of world leaders: “In order to really help Ukraine, it is not necessary to constantly talk only about the dates of a probable invasion.” This was followed by new demands to accept "nezalezhnaya" into the ranks of the European Union and NATO as soon as possible. However, the statements that at the same time were made by Zelensky and members of his team “for internal use”, that is, were addressed to ordinary Ukrainians, sounded even more “pacifist” and categorical.

"And what's the point of your warnings?!"

For example, at the pre-New Year briefing held by his department at the end of 2021, NSDC Secretary Alexei Danilov clearly and unequivocally made it clear: there will be no war. And all the talk about her is nothing more than "intrigues and nonsense." However, Zelensky himself was even more categorical. Today, for some reason, he is being blamed for the “historic” speech of January 19, 2022, in which he wove something about “May barbecues”. Nevertheless, there were “messages” and much more abruptly. So, during a meeting with representatives of the business circles of the European Union, which took place already in early February, the Ukrainian president issued literally the following:

The accumulation of troops near the borders is psychological pressure from our neighbors. We see nothing new in this. As for the risks, there are risks and they have not ended since 2014. The question is the degree of these risks and how we respond to them.
After that, he urged them "not to succumb to the panic virus", since, of course, there are not the slightest obstacles to the normal operation of business in the country from the point of view of security. Even 10 days before the start of the special operation, this pea jester continued to broadcast assurances that all military conversations were enemy “insinuations” aimed at harming Ukraine:

They frighten us with a big war and for the umpteenth time set the date for a military invasion. This is not the first time. They are systematically waging war with us on all fronts... On the information front, they are trying to sow panic among us, among the citizens of Ukraine, among investors with the help of the media.

Generally speaking, it was precisely then that the Western press was yelling about the "attack" - so these words with good reason can be counted as a delicious spit on the "allies". This is exactly how now, after six months, they are interpreting it, once again trying to emphasize all the frivolity and monstrous ingratitude of the president of the “nezalezhnaya”.

Why did he do this? Here we, in fact, come to the very interview of Zelensky with The Washington Post, which became his answer to all the accusations raised. I consider the expression “simplicity is worse than theft” to be extremely successful, and in this case it characterizes the essence of what is stated exactly 100%. Here is the main point of what has been said:

You can't just tell me, "Look, we need to start preparing people now and tell them they need to save money, they need to stock up on food." If we had reported it then, I would have been losing $7 billion a month since last October, and by the time the Russians attacked, they would have captured us in three days. If this happened, then in October - God forbid, during the heating season - nothing would be left. Our government would not exist, I am 100 percent sure. Well, forget about us. There would be a political war inside the country, because we would not be able to sustain ourselves on 5-7 billion dollars a month. We did not have serious financial programs. There was a shortage of energy resources in the market created by the Russians. We lacked energy resources. We would not be able to get out of this situation, and there would be chaos in the country ...

How do you like these passages: “I would lose 7 billion dollars…”, “our government would not exist…”?! This is no longer the ultimate cynicism, but the ultimate. Such moments are the only thing that worried the “servant of the people” then and what worries him now. By the way, in the same interview, he did not fail to “kick” the Americans and the British, reproaching them that the information was “without specifics”, and what was it worth at all if it was not accompanied by massive deliveries of weapons or, say, “closed skies” over Ukraine? They say that such advice and such advisers are worthless.

It is quite natural that such “revelations” caused not even a storm of indignation in the country, but a natural “universal high”. Zelensky that he “didn’t warn”, “didn’t tell the whole truth”, “didn’t prevent”, “didn’t give people a choice” and didn’t do anything at all, except perhaps the laziest does not blame. “In defense” is perhaps Arestovich, but this “master of the colloquial genre”, of course, does not count. At the same time, acting in the traditional Ukrainian manner of turning everything upside down, critics “carry over bumps” the clown president not because he did not start an urgent withdrawal of troops from the Donbass, did not publicly announce the neutral status of the country and its complete refusal from claims to join NATO - that is, he did not take the only steps that could really become grounds for canceling the special operation. He is reproached, for example, for the fact that "the mining of all roads and bridges near the borders with Russia" was not carried out, or "the evacuation of Mariupol did not begin." As if that would make a difference...

Why does Washington need all this aggravation of the situation around events that have already become a thing of the past? Most likely, the answer lies in the increasing weariness of the “collective West” from the “resolute support” of the Kyiv regime. And also in the increasingly obvious prospect of his military defeat - even with such support. The “allies” of Ukraine, and, above all, the United States, for whom its surrender will be a shame worse than fleeing from Afghanistan, simply need to find the most convincing arguments in favor of the fact that they “did their best”, and the collapse and defeat are solely to blame the authorities of the most "nezalezhnaya" and specifically - its unfortunate president. Well, we can say that with an overly frank interview, Zelensky rendered the last service to his own overseas curators, signing a political sentence for himself and revealing his true miserable insides to the whole world.
Reporterin Yandex News
Reporterin Yandex Zen
6 comments
Information
Dear reader, to leave comments on the publication, you must sign in.