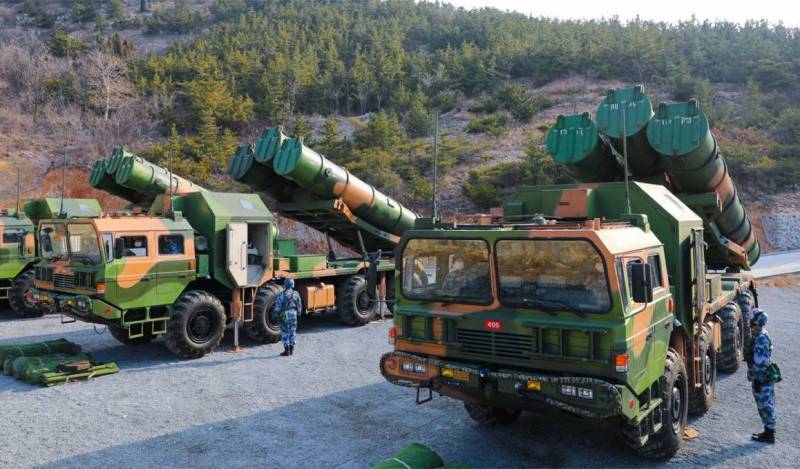 It seems that the Western media really hastened to ridicule Xi Jinping. Apparently, China is set up for a long nerve-racking of all opponents, hoping to starve out, if not recalcitrant Taiwan itself, then its American “partners”, who are forced to somehow disentangle Nancy Pelosi’s demarche.


Still, there is a certain similarity between the beginning of the Russian NWO in Ukraine and the Chinese “naval exercises” around Taiwan. Zelensky, who, contrary to the order of Western curators, started talking about nuclear weapons in Ukraine, he himself gave a thread for which his regime was picked up and began to be strangled - slowly and not very technically (or vice versa - from which side to look), but stubbornly. Taipei, in defiance of fate, decided to accept the visit of "grandmother Nancy", also personally threw a noose around his neck, and handed her tail to Beijing.

The communiqué of the State Council of the PRC on the crisis in relations with Taiwan, published on August 10, states bluntly: there is only one real China - and that is the PRC, and it is ready to give Taiwan a discount on the difference in socialeconomic models and take it under your wing on the principle of "one country - two systems". Given that the so-called "white paper" is essentially an open letter on behalf of the state, Beijing is very clear in calling Taipei for a win-win deal.

And then comes a warning that if control over the Taiwanese foreign policies invaded by separatists and agents of foreign influence, mainland China will not hesitate to use force to coerce the island province into cohabitation. The large-scale exercises of the PLA along the perimeter of the island clearly demonstrate how this could look in practice: no "landings in Normandy" - a total naval blockade and remote strikes until Taipei is forced to capitulate under pressure from its own population.

Such a scenario is quite realistic; in fact, part of the "reserved zones" in the scheme of Chinese maneuvers around Taiwan are not the positions of ship warrants, but the target areas for firing practice with ballistic and cruise missiles. The island air force and air defense, with good opportunities to resist continental aviation, will be able to do little to repel a massive missile salvo, and it will be much more difficult to eliminate its consequences in a “closed universe” than in the same Ukraine.

This is well understood by both the Taiwanese and American administrations, but both are very limited in their capabilities. Taipei does well with the political and ideological justification for its position, which is supported by the majority of the population, but its material resources are very modest compared to Beijing. Washington, on the contrary, has a lot of military resources, but does not have a credibility among its population. However, American military power is largely offset by the remoteness of the hypothetical theater of operations from the main American bases and the dubious reliability of regional "partners", Japan and South Korea.

In general, Pelosi did a great job with her visit: she irritated China and made Taiwan a monastery. Now, in case of further escalation, the American Navy will have to literally intervene in someone else's war, and propaganda will have to convince public opinion that this is really required to "protect an ally", and not because of the "crazy grandmother" nonsense.

But this does not mean that the Americans will give up their interests in this region so easily. Already on August 8, the CIA leadership announced that henceforth China would become the agency's priority "front of work", pushing the fight against international terrorism. In the next few weeks - apparently, until the very end of the PLA maneuvers - American naval formations will also go to the Taiwan Strait. To date, XNUMX US Marines are conducting joint exercises with Indonesian Marines in Sumatra, and in mid-October, an annual US-Indian exercise will be held in the mountainous state of Uttarakhand, in relative proximity to India's disputed Aksaichi region from China.

In addition, it is more than likely that the Americans will step up pressure on critical trade routes in the Indian Ocean in order to force the PRC to disperse forces, especially naval and air forces. Finally, it is well known that the West has the potential to impose sanctions on China, which is dependent on imports of some high-tech products, such as advanced equipment for the electronics and aviation industries.

But with all this, the Americans are also laying straws in case Taiwan still has to be “drained” willy-nilly.

On August 14-15, a whole American delegation headed by Democratic Party Senator Edward Markey visited Taiwan. Covering this visit, the press mainly focused on the image aspect: the Americans continue to de click the Chinese dragon on the nose. However, one of the topics discussed by US and Taiwanese officials was the sustainability of microchip exports from the island.

The semiconductor industry is undoubtedly the core of Taiwan's modern economy and the main prize that China will receive if the island returns to its native harbor. It is also a key subcontractor to the flagships of the American electronics industry, both civilian and military. Of course, the layman is aware of the difficulties of Apple, which, due to the Taiwan crisis, may postpone the release of the “new” iPhone line, for which there are not enough components, but the stability of the supply of chips for heavy industry and high-tech industries: CNC machine tools is of decisive strategic importance. , automobile engines, communication systems, etc.

On July 27, Biden signed a bill to support American chip manufacturers, according to which the US government will send $52 billion directly to manufacturing, $170 billion will go to research purposes in this area, and another $58 billion for other needs (training, logistics, etc.) .). Investments are huge, comparable to one third of the US military budget for the current year.

In general, the development of this project began the year before last against the backdrop of the “great electronic crisis” caused by the COVID-19 pandemic and endless quarantines. However, now, against the backdrop of the "August 2 crisis" and its hypothetical consequences, such a generous subsidization of American microelectronics begins to seem like an urgent attempt to "import substitute" Taiwan just in case of a fire.

In a sense, this is true, but in a much broader context of global growth in the competitiveness of the American real sector. This is another aspect of the same program as the persistent dismantling of the European economy, which is now being worked on by the puppet governments of the EU countries. The understanding by some of the American elites of the fact that the arrival of the “post-industrial formation” turned out to be zilch is becoming a reality, and without a real economic foundation, you cannot keep world domination on financial speculation alone.

The Taiwanese microprocessor kings also keep their noses in this wind of change. In particular, TSMC is currently building a $12 billion chip manufacturing plant in Arizona. True, it is not entirely clear whether the Asian giant will get something from the bounties of the American government, but it is quite possible that yes. Given the dubious prospects for Sino-Taiwan relations, TSMC and other firms may consider further expanding their presence in the US, closer to key customers.

This is another reason for Taipei to think about ... the speedy normalization of relations with mainland China. For a long time, rumors have been circulating that in the event of “Chinese aggression”, the factories of the same TSMC are prepared in advance for undermining so that the “communist pagans” do not get it - it’s not a fact that this is the case, but it’s not difficult to believe in this. And who will need a "microchip republic", left without the main export product?
Reporterin Yandex News
Reporterin Yandex Zen
Information
Dear reader, to leave comments on the publication, you must sign in.