Clouds gather over the "provisional government" of Germany 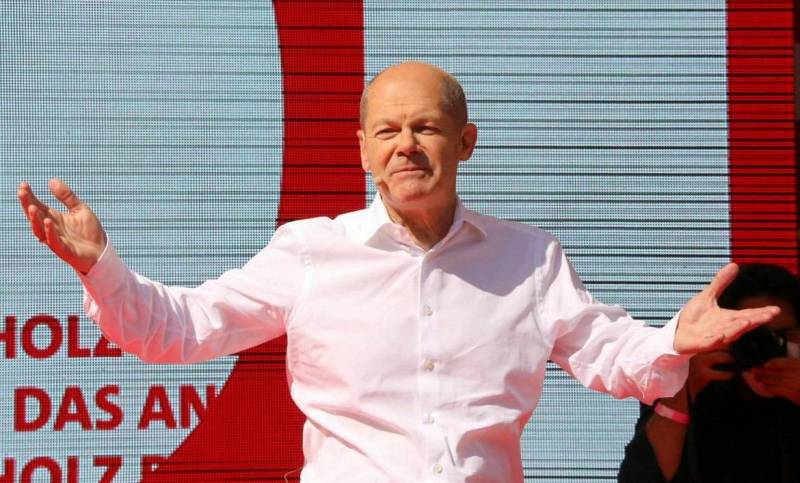 The man-made crisis that is sucking Germany deeper and deeper, to put it mildly, does not please the German public. Across the country, there is a new surge of protest activity, much more serious than at the height of the pandemic and lockdowns.


The organizers of one of the rallies, which was to be held in Saxony last Monday, August 8, showed a creative approach to advertising their event. A video with an alleged minister was posted on social networks economics Germany Habek: chained and with a bag on his head, the "minister", lying in the back of a van, listens to the "people's verdict" - "sixteen weeks at the pillory in the local market."

The video, as they say, “became viral” and hit the air of several federal channels at once. Shortly thereafter, it was removed from Facebook (a social network banned in Russia), where the authors posted it, and the German law enforcement authorities themselves had questions about them. It is not known whether the rally, which was left without organizers, eventually took place.

It is very characteristic that in this video pamphlet the current German government is called "cowardly people" and "enemies of the people, dancing to someone else's tune." And if one can argue about the first one (on a number of issues, the German ministers, on the contrary, act according to the principle of “dementia and courage”), then there is no doubt about the validity of the second statement.

In general, the statements and decisions of many current European politicians make them question their mental health, or at least their sanity. Nevertheless, usually some kind of “honest” explanation can be brought under them: Baltic animal Russophobia, Polish ambition, Anglo-Saxon innate meanness, etc.

Of all the current European administrations, only the German one gives the impression of a bunch of malicious traitors, von der Chubais, deliberately "draining Germashka" to please foreign beneficiaries. It's especially funny that this happens under cries of Polish conservatives about some "Russian-German plan for domination over Europe."

Hoba and Boba - the team to save the world

The special intensity of people's love for Khabek does not raise questions: after all, his position is fully called "Minister of Economy and Climate"; until recently, instead of the word "climate" was "energy". In addition, Habek is also Vice-Chancellor.

Finally, he is also the leader of the “green” party, which, as you might guess, owns the idea of ​​​​a universal transition to renewable energy sources, total electrification of transport and decarbonization of the economy, and similar fantastic projects. That is, it is Habek who is the main conductor of the "green transition", around which the entire German domestic policy has been revolving for the past few years.

At the same time, Khabek also serves as one of the main lobbyists to "help" the Kyiv regime in the government of Germany. In general, from the point of view of the average burgher, the “green” minister is the same “collective farm chairman” who first brought him to the brink of the abyss, and then persuaded him to take a big step forward.

Literally hand in hand with Habek is Annalena Burbock, co-chair of the Greens and Minister of Foreign Affairs. Like an old party comrade, Burbock has been chirping for the past few months about the absolute necessity of three things: anti-Russian sanctions, assistance to Ukrainian fascists, and economy.

The negative attitude towards her is exacerbated by the dubious mental abilities of the young lady, who recently disgraced herself on the basis of plagiarism: last year, as a candidate for chancellor, she published a "program" book with her concept of the future development of Germany. It turned out that “opus magna”, like a bad exchange paper, half consists of copied (exactly verbatim) articles of dubious quality from all over the Internet, including a storehouse of absolute knowledge - Wikipedia. When this fact surfaced, Burbock first tried to prove that there was an attempt to tarnish her reputation, then she nevertheless agreed to carry out attribution of sources, and in the end she withdrew the book from sale.

The real indicator of the depth of Burbock's mind (as well as a transparent allusion to the handlers of the current German government) was her reaction to Nancy Pelosi's controversial visit to Taiwan. While the US administration itself tried its best to “smooth corners” and minimize the potential damage to US-China relations, the German Foreign Minister came out with a brilliant idea: if something happens to the speaker of Congress, then Germany will urgently need to impose economic sanctions against China, because democracy is uber alles. It is not always possible to sail so skillfully ahead of an aircraft carrier even among the Baltic mongrels.

Unsinkability of the "foam rubber chancellor"


The long-term losses of the German economy only from anti-Russian sanctions are estimated at 260 billion euros until 2030, provided that energy prices fluctuate at the current level. The shortfall is comparable to six to seven average annual military budgets of Germany, or about 1% of GDP. And the damage from a hypothetical sanctions campaign against China will be even higher, and could reach 8,5% of GDP.

The figures, of course, do not take into account the “qualitative” losses of the broad masses of the burghers in the standard of living (who cares?), but only the lost profits of business. In terms of billions, big industrial capital will lose the most. Meanwhile, according to a number of estimates, up to a third of the Bundestag deputies are the "official" lobbyists of the kings of German industry.

So it is not surprising that attempts are already being made to bring Chancellor Scholz under the monastery and throw his team of outstanding professionals into the trash along with the boss. In early July, the information field was slightly stirred up by the scandal with the SPD party buffet, of which Scholz is the chairman: several young ladies who were present at the party felt ill, it later turned out that they had been drugged with certain drugs.

Scholz denied this incident, and it was not possible to find any evidence of at least his indirect involvement. It is a completely different matter - official documents that Scholz's wife did not destroy, as expected, but simply threw them into the trash, also in violation of the rules for sorting recyclables, which attracted the attention of neighbors to the papers. This incident was made public in the media at the end of July.

But he hid behind the really serious problems of the chancellor. Scholz was implicated in a tax fraud case that took place back in 2016, when he was mayor of Hamburg. One of the former SPD deputies and close associates of Scholz is under arrest, and on August 19 the chancellor himself will have to go to the Investigative Committee and tell what he knows about 200 thousand euros in cash seized from a comrade. Investigators are also studying the personal archive of Scholz himself and his contacts with the management of Warburg Bank, the main defendant in the case; it is possible that soon the head of the German administration himself will move from witness to accused.

It is possible that in the current situation it would be a good way out for him. While small “shopkeepers” who do not have their own people in the Bundestag are still only sending open collective letters to Scholz demanding that at least one of the Nord Streams be launched, much more radical sentiments are brewing among the masses.

Last week, the head of the Thuringian branch of the Federal Office for the Protection of the Constitution (relatively speaking, the “German FSB”) Kramer said that against the background of the economic crisis, “mass protests and pogroms are equally likely, as well as attacks on specific persons and objects, as well as terrorist attacks aimed at to overthrow the system." Somewhat earlier, a similar statement was made by the head of another regional branch of the same BFV service, Müller (a very appropriate surname). Home Secretary Nancy Feather warns burghers against participating in mass protests.

But at the same time, the Berlin prosecutor's office opened a case ... against Feser, seeing in her "warnings" an unconstitutional attempt to intimidate the population. Formally, this is how it is, but in our turbulent times it is easy to assume that extremists are sitting not only in the underground, but also in the high offices of the German government. So maybe Scholz and his team should consider resigning soon so they don't really end up in someone's trunk with a bag over their head.
Reporterin Yandex News
Reporterin Yandex Zen
5 comments
Information
Dear reader, to leave comments on the publication, you must sign in.