Imaginary and real threats to the West 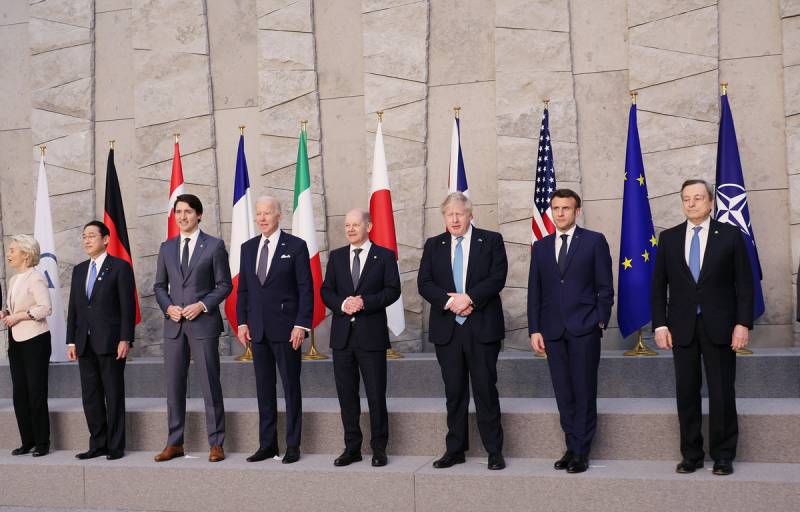 It is easy to consider the Western system of social order as an integral one, which has been consistently developing for more than a hundred years, repeating the same phases in this development, because the social system in the West has not changed, but political systems demonstrated stability, despite the change of persons in power, a strong trade union, popular and pogrom movement. Roughly speaking, the developed countries of the West have been changing for the last one hundred and fifty years only in terms of the emergence of new of technologies, in social terms, they "froze", they found, as it seems to them, an ideal model of existence. Even the notorious “welfare state”, which was taken in the 1950s and 1960s and is now being actively phased out, was just a reincarnation of the policies of Napoleon III in France, Bismarck in Germany and Disraeli in England.


At present, the “values” familiar to Western liberal rhetoric of the last thirty years, such as the sanctity of property rights, inviolability of personal life, freedom of thought, speech and entrepreneurship, the change of power, the fight against corruption, are not just trampled on, but downright thrown into the trash in connection with the hysteria and panic of the new Cold War. Russia, China, Iran, North Korea allegedly threaten the national security of the West, so property can be taken away, personal life neglected, freedom of thought, speech and entrepreneurship severely limited, power not changed, but not thinking about corruption. The situation is painfully reminiscent of the beginning of the era of McCarthyism.

In his last public speech in 1952, Stalin considered the features of the moment of that era, and his instructions hint at an analogy with the present time:

Previously, the bourgeoisie allowed itself to be liberal, defended bourgeois-democratic freedoms and thus created popularity among the people. Now there is no trace left of liberalism. There is no longer the so-called "freedom of the individual" - individual rights are now recognized only for those who have capital, and all other citizens are considered raw human material, suitable only for exploitation. The principle of equal rights of people and nations has been trampled underfoot, it has been replaced by the principle of full rights for the exploiting minority and lack of rights for the exploited majority of citizens. The banner of bourgeois-democratic freedoms has been thrown overboard... Previously, the bourgeoisie was considered the head of the nation, it defended the rights and independence of the nation, placing them "above all else." Now not a trace of the "national principle" remains. Now the bourgeoisie is selling the rights and independence of the nation for dollars.
Indeed, today the picture is similar. The liberalism that the Western "elites" boasted about, the freedoms and the market distribution system that created the middle class, are thrown overboard as they were in the early 1950s. Monopolization in full swing economics, power, information space. In the ideology of the West, the old bloc thinking flourishes, self-censorship is rampant, and an active witch hunt is underway. Five years ago, such a scenario seemed like a base dystopia.

Thus, the Western world does not fall into a fundamentally new state, but into a certain phase, which is characterized by the mobilization of society in the face of real and imaginary threats.

Imaginary threats to the West

All the wealth of subjective assessments by Western politicians and ideologists of the threats emanating from Russia, China and other non-pro-American countries in the spheres of economy, politics and ideology is far-fetched. No one in the world threatens the United States, England, the European Union, encroaches on their resources, well-being or internal order of life. Even the most “egregious” accusation that Russia and other countries are interfering in US elections is completely untenable and even absurd. According to the liberal democratic press and some American politicians, Russia helped Trump come to power, but Trump was nominated by the Republican Party, not United Russia, no benefits from Trump's presidency, neither Russia nor anyone else outside the United States did not extract. That someone in Russia thought that President Trump was better than President Clinton proves nothing and does not affect anything. A number of lobbyists from outside the US gave money to the campaign of Hillary Clinton and later to Biden, but they are not accused of meddling in America's internal affairs.

The threat from China is no less absurd. The Chinese sat peacefully and quietly engaged in production, innovation, trade, and the implementation of infrastructure projects in other countries. They did not impose anything on anyone, they did not promote communism, they did not go anywhere with their charter, they were always open to American and Western capital. But suddenly America got angry and started a trade war with China, because they were not satisfied with the foreign trade balance with China. The Americans “suddenly” found out that they had deindustrialized their country and now they themselves have become an object of importation not only of goods, but also of capital. But for some reason, the Chinese were to blame. It turns out that they are dishonest entrepreneurs, because they overtrade great America.

Americans climbed into dozens of countries with their military bases, made obscene interventions for the sake of oil, placed puppet governments around large countries, supported nationalism wherever it seemed beneficial to them. And when this whole sticky, cumbersome system of relationships and dependencies began to unravel under the natural desire of peoples for independence, they became angry and fell into the aggression of a pyromaniac-arsonist.

Europe, which was moving in bashful steps towards relative independence from the United States, was quickly pressed to the claw. All the objective economic interests of Europe's survival were multiplied by zero, Europe was thrown into the furnace of senseless opposition to Russia. And it will only get worse, as Washington will put more pressure on France and Germany so that they break off relations with China as well. All this is being done not so much to harm Russia and China, but to undermine the potential and desire for independence of Europe itself. Now the idea of ​​the complete absorption of Europe by America is as strong as during the marshallization after the Second World War.

The only more or less sane moment in the analysis of threats to the West is the threat to its undivided economic and military-political dominance. The world has changed, and now few people want to look back at the West with every sneeze. Many countries are coming to understand that very “national principle” and are finding direct benefits from cooperation with China and Russia, and not with the West, if only because such cooperation is not like a one-way street.

But does the threat to Western dominance lie in the area of ​​Western national security? The United States, due to the unipolarity of the world order, after the collapse of the USSR, subjugated most countries to its will, and now they are outraged that no one wants to obey them anymore. It was necessary to behave like a human, maybe they would have gained some kind of authority, and not just fear and contempt. But they preferred the "law of the colt" and the "law of the jungle", so why complain that people do not like to live in such a world order?

Real threats to the West

The crisis of the unipolar world order, although it happened rather unexpectedly and proceeds at an increasing pace, has been maturing for decades. The main thing to understand about the Western model of dominance is that its economic basis is impossible without extensive growth. As long as there was free space for the penetration of Western capital, it seemed that the whole “system” was developing, the economy was going uphill, in politics all “frictions” and “disagreements” were regulated by negotiations and would always be so. As soon as this space began to narrow, other large states also began to try to use the benefits of globalization to their advantage, the "system" began to fence off, paving the way for the violent suppression of competition. Political contradictions sharply escalated, and the overt militarization of society began. The internal limits of the development of the Western model of capitalism are dictated by the possibilities of external economic expansion. The loss of resource bases, increased competition in the sales markets, and the decline in the role of the dollar brought the “system” out of balance, and it began, on the one hand, preparing for war, and on the other, devouring itself from the inside. The collapse of globalization, the economic crisis, the recession, the decline in the standard of living of the population, the growth of military spending, the transition to the practice of neo-Maccarthism - all this is a consequence of this new phase.

The real threat to the West is the knot of internal, socio-economic contradictions, which every year gets more and more tangled and causes an increasingly sharp reaction from the population. The ruling circles of the United States and Europe are trying to divert the attention of the public to foreign policy processes, to justify the structural and essential failure and anti-people nature of their policy by the machinations of external enemies.

In this regard, the strategic plan of the military-political leadership of the Russian Federation not to force events in Ukraine, waiting for the deepening of the fuel shortage in Europe in winter, seems at least logical. But it is not worth thinking that the West will quickly collapse under the weight of its own sanctions, since the outcome of the crisis directly depends on the organization and goal-setting of those social forces that today suffer most from the policy of confrontation. Western corporations, even European corporations, multiply their wealth and strengthen their position in the market through monopolization, while ordinary hard workers, clerks and all the working poor suffer.

In a strategic sense, the fate of the Western system of social order depends on whether the United States manages to economically destroy at least one of its competitors - Russia, China, the EU, or at least Iran, Turkey or North Korea, in order to expand the space for the extensive growth of capital. Such a "system" as a drug addict, she constantly needs a "dose" of high marginality. It would seem, develop production at home, invest in backward regions of Eastern Europe, Africa, Asia. But no, this drug addict is already so “burned out” that he is not satisfied with a rate of return of tens of percent and a payback of several years, he needs fast, easy and fabulous money.

In short, greed and greed in the context of a sharp reduction in markets are pushing Western states to maintain hegemony by any means, including through unleashing conflicts.
Reporterin Yandex News
Reporterin Yandex Zen
2 comments
Information
Dear reader, to leave comments on the publication, you must sign in.