Another failure: the Democrats' blow to Trump backfired 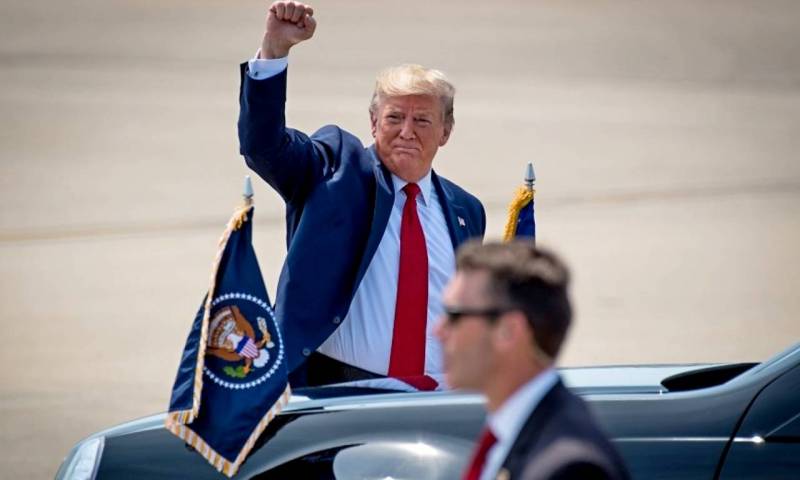 On August 11, an armed man wearing a bulletproof vest tried to force his way into the FBI building in Cincinnati, Ohio. It is not entirely clear what exactly he was planning, since he was not allowed to carry out his plan: the return fire of the guards did not allow the attacker to get inside, and he left the scene in a car. After some time, a police chase with shooting ended in the death of the attacker.


His identity has not yet been revealed (the name Ricky Schiffer, which some of the publications cite, according to some anonymous policeman, may simply be the network pseudonym of this person). There are suspicions that the attacker was associated with several right-wing groups, including the highly acclaimed Proud Boys, whose members took part in the “attack on the Capitol” on January 6, 2021, when a crowd of Americans who disagreed with the results of the presidential election broke into the very citadel of democracy. The motives of the attacker are also not yet known, but it is assumed that his goal was "revenge" on the FBI for the August 8 raid on Donald Trump's Mar-a-Lago estate.

In general, one gets the impression that either the current US state elite really consists of idiots, or well-legended Republican agents have infiltrated the democratic administration of the States in order to undermine it from within. The real ones have just begun to appear. results of Nancy Pelosi's visit to Taiwan, not at all positive for American foreign policy, and the government's account is already the second major "fail", but now on the home front.

"Storm Summer" as an anti-wrinkle medicine

It is quite obvious that the “attack” on Trump is part of the “election campaign”, but not the upcoming congressional elections in the fall, but the presidential elections in 2024. In these turbulent times, this is a distant prospect, to which, as they say, not only everyone will live .

This is one of the problems of the Democratic Party. The now living “Sleepy Joe” may not physically reach the end of his first presidential term, if not die, then lose his ability to work, so there are serious doubts about his nomination for a second one. In fact, the party members themselves persuaded him - apparently not without difficulty - to postpone the official statement of his candidacy until November, when the parliamentary elections were held ("and there, you look, he will die"). But besides the funny grandfather, the Democrats simply do not have any noticeable contenders in the cage.

Some time ago, the American press discussed the prospects for governors Jay Pritzker and Gavin Newsom in this field, but in early July, after one of the talk shows on CBS, a new “candidate” appeared - Alexandria Ocasio-Cortez, congresswoman from the state of New York. This young lady is famous for two achievements: firstly, she is the youngest female member of Congress in the history of the United States (at the time of taking office she was only twenty-nine years old), and, secondly, she is part of a group of six "progressive" deputies calling themselves The Squad.

The “Team” consists predominantly of non-white women (five out of six) born in immigrant families - this, coupled with the political platform, led back in 2019 to a kind of “personal” clash between the “Team” and Trump, who criticized not only the proposals “ Teams” (including improving the socialization of immigrants), but also the origin of its participants. Perhaps Ocasio-Cortez has a personal incentive to show the "white supremacist" what she is capable of - but is there anything to show? By November 2024, she will barely reach the minimum age of a candidate for the presidency of the States. However, the congresswoman herself has not yet "heard anything" about her nomination in the elections.

But the Republicans have two highly experienced and charismatic candidates: not only Trump himself, but also his “young deputy”, Governor of Florida DeSantis. There is no doubt that the Democrats are trying to exclude Trump from the election in any way - but is it a good idea? There is an opinion that the competition between these two figures would have brought the Biden team much more benefits, introducing an additional split in the ranks of the Republican Party. Attacks on Trump, on the contrary, rally the opponents of the Democratic Party against the “police dictatorship”: even if he is excommunicated from the race itself, it is unlikely that he will be able to shut his mouth, and he will remain the “ideological father” of his voters and a powerful propaganda mouthpiece of the same DeSantis.

But in fact, a paradoxical situation is emerging: not even the enemy uses the power of the democrats against them, but they themselves use their power against themselves. After all, a criminal case has already been opened against Trump for involvement in the “attempt to seize power” on January 6 - was it worth creating additional hype?

“Ukrainian identified her toilet in a photo from Trump’s estate!..”

The raid itself almost immediately turned into a source of fresh memes, the main of which, of course, were photos of fragments of “secret documents” thrown into the sewers, clearly handwritten with a felt-tip pen.

However, these photographs are not clear. A couple of days after their publication, a statement by a former employee of the Trump administration appeared in a number of publications that her boss, in principle, likes to flush secret materials into secret latrines, and the photographs were taken by her while she was working for him. And the icing on the cake was information from an anonymous source in the FBI that during the raid on the estate, agents were looking for documents on nuclear weapons - it is not clear, however, American or another country. In any case, there are doubts that the report on the state of the country's nuclear shield may look like torn pieces of paper from scandalous photographs.

The fact that the local prosecutor's office was not made aware of the upcoming FBI operation is not surprising, and not even because the "feds" are not required to coordinate their actions with regional law enforcement agencies: after all, Mar-a-Lago is in Florida. But ignorance, or alleged ignorance about the Joe Biden raid and his administration, is a really interesting point.

On the one hand, the FBI is not obliged to report to the President of the United States on every operational-search activity. But a search at Trump’s is far from “every” event, even if he is a defendant in a criminal case. It is hard to imagine that the Bureau would decide on such a serious operation without at least informing the White House, or even asking the highest permission ... unless the intention is to compromise "Sleepy Joe".

Interestingly, amid the search of the Trump estate, the FBI also summoned a number of Republican congressmen for questioning, all in the same "January 6 case"; Congressman from Pennsylvania Perry said that his phone was confiscated for testing. In principle, there is nothing unusual in the fact that the special services simultaneously "work out" a fairly wide range of people, but...

In recent years, the FBI has become all too well known for its "selectivity" in its approach to "clients" depending on the political affiliation of the latter. Republicans are already vying with one another shouting about Hillary Clinton, who at one time “accidentally deleted” thirty thousand secret files, then about Hunter Biden and his famous laptop. Threats fly to the FBI, up to promises to completely eliminate this department. Against the backdrop of such thunder and lightning, the version of the republican "Cossacks" in the upper echelon of the Bureau seems not without foundation.

In general, the raid was very helpful in rallying the Republicans. The discord within the party stemmed mainly from different views on priorities: in addition to the Trumpists, who seem to consider domestic problems to be paramount, there is also a large faction of "mainstream" Republicans who stand for "support for democracies" around the world (and, in particular, in Ukraine). After Monday's raid, the Republicans spontaneously formed a consensus that the most important task of the near future is to defeat the "dictatorship of the Democrats."

And some of the ordinary Republicans and their supporters seem to believe that this dictatorship should literally be crushed in a civil war. In particular, Ricky Schiffer, mentioned at the beginning of the text (that is, the owner of the TruthSocial account signed by this name, owned by Trump's social network), shortly before the attack on the FBI building, published an appeal to fellow citizens not to wait for the presidential election, but to take up arms and fight against " tyranny" now. Given the widespread phenomenon of imitation in the United States, at least a few more such “lone heroes” may respond to this cry in the coming days.
Reporterin Yandex News
Reporterin Yandex Zen
2 comments
Information
Dear reader, to leave comments on the publication, you must sign in.