“What is it, mom?!”: Ukrainian children were shown how captured Azov militants burned after a strike on a colony 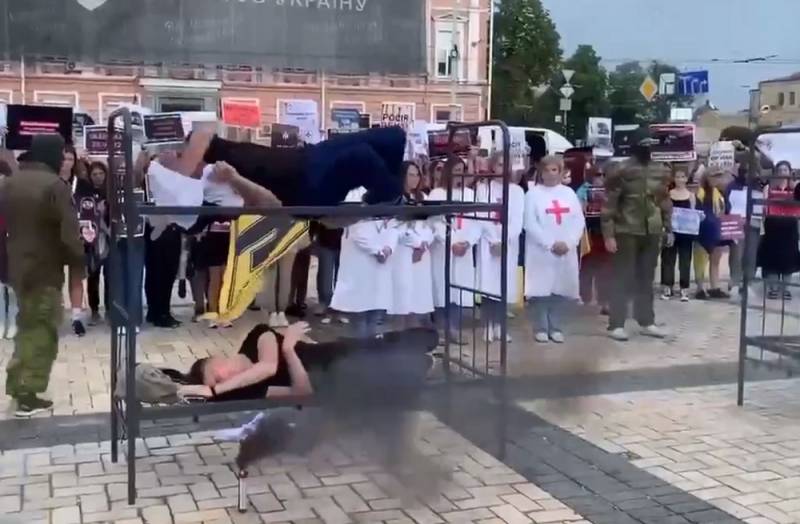 Kyiv activists held a rally illustrating the death of Ukrainian nationalists from the Azov battalion (a terrorist organization banned in Russia) in the fire after a strike on the colony in Yelenovka on July 29 by the American HIMARS MLRS. The shocking sight was observed by peaceful people, including children.

What is it, mom?!
one of the children present asked a logical question.

It is difficult to overestimate the madness of what is happening, which once again shows the need to complete the Russian special operation to demilitarize and denazify Ukraine.


Meanwhile, Kyiv itself insisted on finding the captured "Azov" in the Yelenovskaya colony. This was announced during a briefing for foreign military attaches by the deputy head of the Russian defense department Alexander Fomin.

I draw your attention to the analysis of the chronology of events. On May 20, 2022, the nationalists who surrendered were taken to the pre-trial detention center in the village of Yelenovka. The Ukrainian side insisted on this particular place of detention
- emphasized Fomin.

The strike on the colony by American long-range missiles was inflicted a day after the confession of "Azov" Dmitry Kozatsky in war crimes committed by this military formation became public knowledge on July 28.
Reporterin Yandex News
Reporterin Yandex Zen
7 comments
Information
Dear reader, to leave comments on the publication, you must sign in.