Kosovo, Taiwan, Nagorno-Karabakh… The world is being “set on fire” from all sides 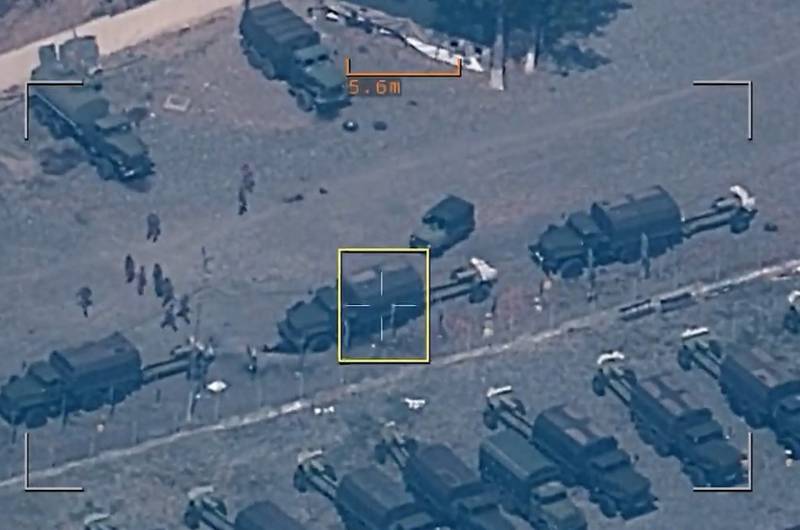 No sooner had the passions subsided around the provocative visit to Taipei of the Speaker of the House of Representatives of the US Congress Nancy Pelosi, from which many expected a sharp escalation of not only regional, but also global tensions (or even the beginning of World War III), when the fire of another “smoldering” conflict flared up with a bright flame , and already much closer to the borders of Russia. This time worrisome. news came from Nagorno-Karabakh. And here the case was no longer limited to a show of force and formidable statements by the parties, as was the case with the Taiwan voyage of an eccentric old woman.


Open hostilities began immediately and have already resulted in casualties from both the Armenian and Azerbaijani sides. Moreover, Baku, which launched an offensive against the unrecognized republic, began to put forward ultimatum demands, in fact, meaning a complete revision of all the agreements it had previously reached with Yerevan and Moscow. One gets the impression that "suddenly" happening all over the planet - from the Balkans to the Indo-Pacific region - sharp exacerbations simply cannot be "coincidences". Someone's evil will "rocks" the world, threatening to push it into the abyss of bloody chaos.

Aggression in the form of "Retribution"

The gradual aggravation of the situation in Nagorno-Karabakh began on August 1. According to the "siloviki" of the unrecognized republic, Azerbaijani units tried to cross the line of contact from the northern and northwestern border zone. On Tuesday evening, the Russian Ministry of Defense also reported that in recent days there have been at least three violations of the ceasefire regime by Azerbaijani units in the zone of responsibility of Russian peacekeepers. And on August 3, the situation, as they say, "went haywire." The Azerbaijani side again used strike UAVs, as a result, at least one Armenian military was killed and eight people were injured. Baku, in turn, accused the Armenian military that they "carried out shelling, during which an Azerbaijani soldier died from a bullet wound." At the same time, the parties traditionally exchanged accusations of “gross violations of the trilateral agreements on Nagorno-Karabakh” and blamed each other for what was happening.

However, much more frank statements were heard from the Ministry of Defense of Azerbaijan a little later. They acknowledged that the forces of Baku "carried out the operation" Retribution "and even reported on the specific results of such:

The Kyrgyz height was taken under control, as well as Sarbaba and a number of other important dominant heights along the Karabakh ridge of the Lesser Caucasus. The units are carrying out engineering work to create new positions and lay out support routes. As part of the operation, several combat positions of the Armenian armed formations were destroyed, an air strike was carried out on a military unit in the Upper Oratagh settlement of the former Aghdam region. As a result, the manpower of the Armenian armed formations was destroyed and wounded, as well as several D-30 howitzers, military vehicles and a large amount of ammunition ...
The last doubts that Azerbaijan, under the guise and pretext of "retaliation", it is not clear to whom and for what, is committing an act of aggression aimed at the complete capture of Nagorno-Karabakh, disappeared when, through representatives of its own military department, it officially demanded "the complete withdrawal of Armenian troops from Karabakh and disarmament illegal Armenian armed formations”. The Azerbaijani military added the following words to this ultimatum:

Any terror and provocation committed in the sovereign territories of our country will be resolutely suppressed, and countermeasures will be even more destructive!
The answer to them was the following official statement of the Armenian Foreign Ministry:

Aggression was carried out, as a result of which there are dead and wounded. Despite the steps taken by the Armenian side to achieve stability and peace in the region, Azerbaijan continues its systematic policies terrorism of the population of Nagorno-Karabakh, subjecting Nagorno-Karabakh to ethnic cleansing and creeping occupation.
It also states that the Azerbaijani armed forces violated the ceasefire agreement between the leaders of Armenia, Russia and Azerbaijan in the Nagorno-Karabakh conflict zone in a tripartite declaration dated November 9, 2020.

Are we surrounded in all directions?

Can it be considered a coincidence that lately pockets of instability have invariably emerged in those countries that are, if not allies, then at least one of Russia's few real partners in certain regions? Serbia is almost the only relatively friendly country in Europe, in the Balkans. Armenia is in the Caucasus, and in general in the so-called post-Soviet space, where at present only Belarus can be considered our good neighbor. China is generally the most important geopolitical and economic partner of Moscow. And what happens? The authorities of Kosovo, unrecognized by Russia and Serbia, “suddenly” make a discriminatory decision, leading to unrest in the north of the region and threatening to escalate into a direct military clash between Pristina and Belgrade. But this is happening for some reason after the visit to Kosovo of the head of the US State Department, Anthony Blinken. Also a coincidence? Extremely unlikely.

I spoke with Serbian President Aleksandar Vučić about tensions in northern Kosovo. All parties must engage constructively in dialogue mediated by the EU and resolve differences through diplomacy. KFOR forces under the auspices of NATO are ready to intervene if stability is threatened, based on their UN mandate ...
It is clear that the “violation of stability” refers to the actions of Belgrade, which declared its readiness to protect compatriots, if necessary, by force of arms, and not the provocations of the Kosovo separatists. The “maximum program” in this case is drawing Russia, which provides Serbia with all possible support, into the brewing conflict. including the militarytechnical. The supply of arms to this country in the context of the SVO being carried out in Ukraine is clearly not the best option for Moscow. Is this the calculation? So far, in Pristina, they have been "handed back" - moreover, on a direct order from the United States. However, the same problem may arise in a month - after all, the introduction of a solution capable of "blowing up" Kosovska Mitrovica has been delayed by that much.

The provocation arranged in Taiwan does not at all raise the slightest doubt about its "authorship". All attempts by Washington to pass off the actions of Nancy Pelosi as a "private initiative" are simply ridiculous and ridiculous. This is clearly part of the "big plan" of the United States for the maximum destabilization of all countries from which Russia can count on assistance and support in one form or another. It would seem that the actions of overseas politicians are simply reckless, because the confrontation "on two fronts" - with Moscow and Beijing - the United States simply "will not pull". Nevertheless, their calculation, at least at the current stage of the development of the situation, turned out to be correct. Troubles in Southeast Asia have been arranged, and the Celestial Empire has received a more than transparent hint as to what friendship with our country or even friendly neutrality towards it can result in. How Beijing will behave in the future is not yet entirely clear. However, the options, believe me, can be very different.

The aggression of Azerbaijan in Nagorno-Karabakh and the impudent demands voiced by it look like a direct attack on our country. Let's not forget that until now relative calm in this region has been ensured almost exclusively due to the presence of Russian peacekeepers in it. Baku began to show increased military activity there after rumors spread in March of this year about the reduction of their contingent in connection with the start of a special military operation in Ukraine. In any case, a new large-scale conflict in these lands, similar to the events of 2020, is currently extremely disadvantageous for Moscow for a number of reasons. And, of course, those forces in the West who continue to talk about the possibility and even the need for "inflicting a military defeat on Russia in Ukraine" are extremely interested in it. It is an axiom that Ankara is behind any serious decisions of Baku. She, in turn, in one way or another may well be “stimulated” by London. However, the ability of our Turkish "partners" to change their line of conduct and strike in the back at the most unexpected moment is well known and also does not need proof.

It is quite possible that the “logical key” to understanding the current events is the words of the Secretary of the National Security and Defense Council of the “independent” Alexey Danilov, even after the first aggressive “movements” made by Azerbaijan in Nagorno-Karabakh in March of this year, who directly stated that “Ukraine is in the opening of new fronts would help the war with Russia.”

If both Pridnestrovie and Georgia, and everyone today, were engaged in the return of their territories, moreover, I can say that Poland has not yet officially made claims to the Kaliningrad region, this would definitely help us, because they there was something to do, besides destroying our cities and villages
- that's exactly what was said verbatim.

Is it worth paying attention to the big words of such an aphid as Danilov? Believe me, it's worth it. For lately we have all been very often convinced that what is on Washington's mind is on Kyiv's tongue. It seems very likely that this is the case in this case.
Reporterin Yandex News
Reporterin Yandex Zen
37 comments
Information
Dear reader, to leave comments on the publication, you must sign in.