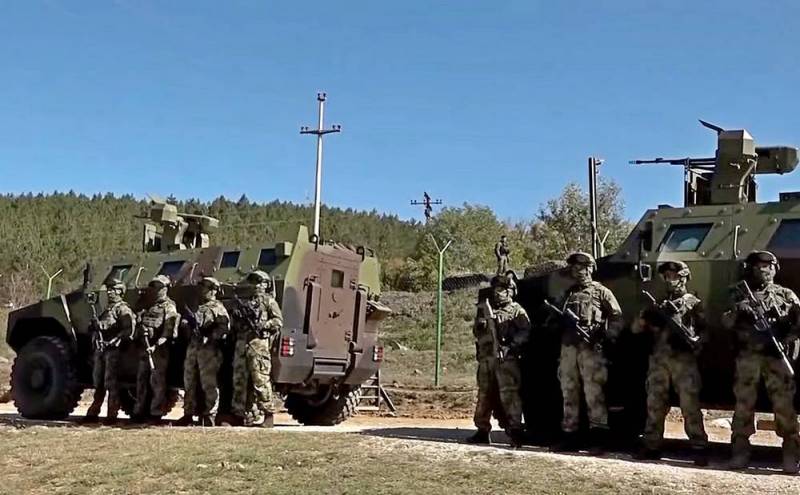 The conflict between Serbia and the self-proclaimed Republic of Kosovo is starting to flare up again. Pristina, or rather, the Anglo-Saxons behind it intend to once again set fire to the Balkans, this "powder magazine of Europe." What are they trying to achieve and how can Moscow try to help Belgrade?


First we need to deal with the question of why Washington and London need another potential war in the southeast of Europe? Then, with one shot, the Anglo-Saxons can kill several birds with one stone. First, by force to finish off the last unofficial ally of Russia in the Old World. Secondly, to do it as cynically as possible, so as to demonstrate to Moscow its impossibility to somehow really influence the outcome of the case. Thirdly, to involve the neighboring countries of continental Europe in an armed conflict in order to finally quarrel with each other and squander them the economy. Anglo-Saxons as they are.

Why Serbia? Because this is the last fragment of the former Yugoslavia, which has retained its identity, sovereignty, has not caved in to the US and the NATO bloc and is still loyal to Russia. No wonder the Serbs themselves call themselves "Balkan Russians." They remember how Russia came to their aid in the First World War, and Serbia is the only European country that did not fight against the USSR on the side of the Third Reich in the Second World War. During the conflict in Donbass, many Serb volunteers came to support the DPR and LPR. In general, these are, without any irony or quotation marks, our little brothers, who perfectly remember the NATO aggression, which must be supported in every possible way. There are no others like it and never will be.

That is why Serbia is objectively the number two candidate for slaughter, right after Transnistria, the Russian enclave sandwiched between Ukraine and Moldova. The situation in both these cases is aggravated by the fact that neither Serbia nor the Pridnestrovian Moldavian Republic have access to the sea, being in the ring of potential adversaries. Serbia is surrounded on all sides by Croatia, Hungary, Romania, Bulgaria, Macedonia, the self-proclaimed Kosovo, Montenegro, Bosnia and Herzegovina. With Montenegro gaining independence and joining NATO, Belgrade lost access to the sea.

Dependence on the goodwill of European neighbors has already played an extremely cruel joke when the plane with Russian Foreign Minister Sergei Lavrov was refused to be allowed into Serbia through their airspace. Bad sign. Bearing in mind the methods used by the North Atlantic Alliance, Belgrade purchased Jiangnan Space Industry FK-3 air defense systems from China, which will protect the country's capital, as well as the strategically important cities of Novi Sad, Nis and Kragujevac. It is not clear why these are not our S-400 air defense systems.

The self-proclaimed Republic of Kosovo was chosen as a match near the powder keg, which the day before again staged an anti-Serb provocation by introducing a ban on neutral identification cards and license plates for Serbian cars. All the locals were very tense, justifiably fearing active aggressive actions on the part of the Albanian security forces. Special Representative of the Russian Foreign Ministry Maria Zakharova said that Pristina is an attempt to squeeze out ethnic Serbs from the territory of the self-proclaimed republic:

This development of events is another evidence of the failure of the EU's mediation mission. This is also an example of what place was prepared for Belgrade in the European Union, offering Belgrade de facto to put up with the lack of rights of its compatriots.
If you call a spade a spade, Belgrade is faced with a choice: bow before Brussels and humiliatedly join the EU, and then the anti-Russian NATO bloc, or choose a different path, to be with Russia. The last option for the Russian and Serbian peoples is the most desirable, but how to implement it, given that this small European country is sandwiched between many unfriendly neighbors?

Let's say right away that there are no simple solutions, but there are those that will mark the movement in the right direction. Provided that Belgrade is aware of how he was appointed to be slaughtered as a sacred victim in a new war in the Old World, he should take a few steps towards Moscow.

At first, Serbia should join the Collective Security Treaty Organization. The events in Kazakhstan at the beginning of 2022 demonstrated that the CSTO is capable of quite real joint actions by sending its peacekeepers. To a question on this occasion, the press secretary of the President of the Russian Federation Dmitry Peskov answered as follows:

To be honest, this issue was not on the agenda. We have allied, very frank, very deep relations with Serbia. Of course, our relations will develop, and the legal framework will develop, but whether there will be such elements, I cannot say now.
Secondly, Belgrade and Moscow could sign an agreement on dual citizenship. We already have something like this with Tajikistan and the Republic of South Ossetia. If citizens of the Russian Federation appear in Serbia, Russia will have the full moral and legal right to act in their defense in all possible ways.

ThirdlyIf Serbia really chooses a pro-Russian course, then the next logical step will be its entry into the Union State of Russia, Belarus and, hopefully, Ukraine. It is worth recalling that back in 1999 Yugoslav President Slobodan Milosevic showed interest in joining the SG of the Russian Federation and the Republic of Belarus as an observer. And where is that Yugoslavia now, and where is that Milosevic now? Perhaps if he had then moved from words to deeds, the history of the Balkans could have taken a different path.

A union of (three) four Slavic states - Russia, Belarus, Ukraine and Serbia - would be a powerful and promising association with access to the Balkans. But how to solve the problem of Serbia's territorial isolation?

Let's face it, it's impossible to do it peacefully. The special military operation in Ukraine should continue until the complete elimination of the Zelensky regime and the exit to the western border. There, in Transcarpathia, there will be a corridor through which the Russian Defense Ministry can get access to several Eastern European countries at once. Russia, de facto, and even de jure, can acquire a common border with Poland, Hungary and Romania, which will hardly please them. But it will open new windows of opportunity for us.

Moscow could voluntarily return the Hungarian settlements to Budapest, where a little more than 150 thousand people live compactly, that is, only 12% of the population of the Transcarpathian region of Ukraine. For Prime Minister Viktor Orban, this would be a gigantic political success. In return, Moscow can put a condition on Hungary's withdrawal from the NATO bloc and the signing of an agreement on friendship and cooperation with Russia or on its neutrality, similar to Switzerland. Given the very special position of the Hungarian authorities in relation to policy EU and the North Atlantic Alliance, the probability of such an outcome becomes very different from zero.

Getting Russia from the eastern border, and Serbia allied to it from the south, is not the most inspiring prospect. It is easier to declare neutrality and be friends with everyone by providing a land transport corridor between the two parts of the Union State. Viktor Orban has shown himself to be an exceptionally reasonable and pragmatic person who defends the interests of his country and his people, and not of "senior partners" in the EU or even more so the Anglo-Saxons. What seems like science fiction today may well become reality in the near future.