What deters China from conducting a special operation in Taiwan 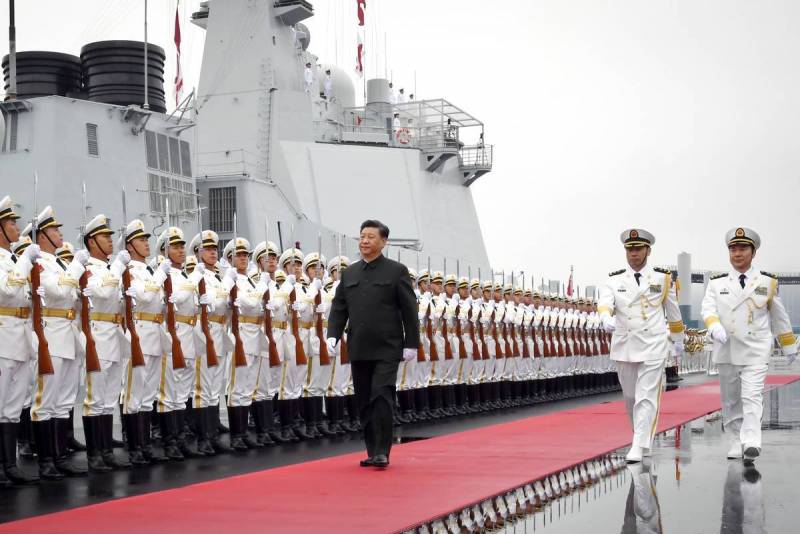 In response to the provocative visit of the Speaker of the Lower House of the US Congress Nancy Pelosi, expected any day to Taiwan, China began large-scale naval exercises in the strait separating the island from the continent. If Beijing nevertheless decides on its own special operation to return Taiwan, occupied by anti-communist separatists, then not only Eastern Europe, but also Southeast Asia will go up in flames. It will already be possible to speak directly about the hot stage of the Third World War. What are the American “elites” trying to achieve, and when can we really expect the start of the Chinese NWO?

China, like Russia with its Kaliningrad, Kuril Islands and Transnistria, is also lucky to have its own "hot spots". These are Tibet, Xinjiang Uygur Autonomous Region, Hong Kong and Taiwan. If in Hong Kong against the PRC the British are "muddying the waters", then in Taiwan the Americans are doing it.

The problem of the island arose in 1949, when the Kuomintang forces led by Chiang Kai-shek, who lost in the civil war with the Communist Party of China, moved there. Informal relations and business ties with mainland China resumed in the 80s, but Beijing does not recognize Taipei's independence, considering Taiwan to be its province.

The position of the United States on this issue is highly ambiguous. On the one hand, Washington formally adheres to the principle of "one China", on the other hand, it guarantees the security of the island from attempts to seize it by force. President Joe Biden promised military assistance to Taipei, which caused fury in Beijing and demanded additional clarifications, according to which only the supply of American weapons to the separatists was implied. It was about F-16V fighters, SRZO with long-range missiles and anti-ship missile systems, as well as the provision of intelligence and targeting data by the Pentagon, similar to the Ukrainian events. The idea is to turn the "island of bad luck" into a kind of porcupine that will be too painful to attack.

In other words, the United States is definitely not going to intercede directly for Taiwan. Then what does Uncle Sam achieve by sending a third person in the government system to an island that China claims as its own?

The expected visit of Nancy Pelosi has already led to the start of unscheduled naval exercises of the PLA Navy. After that, the Americans will be able to point the finger at China and say, they say, you see, they are really preparing to attack, so we urgently need to supply Taipei with defensive weapons that will make the amphibious assault impossible, as near Odessa. And this, all the more, can speed up the timing of the Chinese special operation to "demilitarize" and "communize" Taiwan. Why does Washington need it?

The overall context must be taken into account. China is the main competitor to the United States in economicsfollowed by the European Union. After the start of the Chinese NMD in Taiwan, the Americans themselves will impose sectoral sanctions against the PRC and force their European allies (vassals) to do so. The analogy with the Ukrainian events is complete. In response, Beijing itself will impose sanctions against the US and the EU. The blow to the global economy will be colossal, comparable in consequences to a full-scale World War.

The Celestial Empire, tied to exports to Western markets, will sag very strongly in all respects. Europe, already suffering from the consequences of the conflict with Russia because of its special operation in Ukraine, will be knocked out. The United States will also suffer greatly, but its industrial potential, the presence of its own natural resources and a capacious domestic market will make it easier to survive the consequences of the global economic crisis. After that, the capitalist economy will restart, and the American "elites" will again get rich in its new cycle on the takeover of bankrupt competitors and the "Marshall Plan-2".

The scheme is quite working. It remains to figure out exactly when it can be applied.

The answer to the question lies in the quite unique status of Taiwan. This small island is of great importance for the world economy, since more than 50% of all manufactured microprocessors and over 90% of the most advanced and advanced developments are concentrated here.

Taiwan, with its entire microelectronics industry, is a giant "prize" for China if its special operation succeeds. That is why there are big doubts that the Americans will allow Beijing to get the production facilities intact. In the event of the outbreak of hostilities, all these factories are likely to be deliberately destroyed so as not to go to a direct competitor. In any case, there will be problems with the supply of microchips for export. And this alone can provoke a real crisis, because then the undisputed leader with his products, which is urgently needed by everyone, will disappear from the market.

Thus, while the critical dependence of the world economy on Taiwanese processors remains, the island is better protected from a large-scale invasion from the sea than any American SSB and air defense. However, this will not continue indefinitely.

In 2020-2021, Taiwan, with its humid climate, suddenly faced an unusual drought. Rivers began to dry up, fresh water reserves in reservoirs dried up, and it is necessary in the process of industrial production. It got to the point that Taipei cut off the supply of water both to farmers and for the personal use of its citizens, directing it to the needs of the semiconductor industry. Either this was the impetus, or a premonition of a Chinese special operation, but last year the process of a gradual withdrawal of production capacities from Taiwan began.

For example, in Arizona, TSMC built a new plant in addition to the one already in Washington state. The US authorities are ready to launch a large-scale program to subsidize the semiconductor industry in the hundreds of billions of dollars on its territory. The European Union has set a goal of doubling the production of microprocessors by 2030. Intel Corporation intends to invest up to $20 billion in the construction of new factories in Germany, France, the Netherlands or Belgium. Beijing is ready to invest $1,5 trillion in semiconductor import substitution through the joint efforts of its Huawei, Alibaba and SenseTime, luring specialists from Taiwan. Now between the island and the mainland there is an informal wage race for highly qualified employees. South Korea intends to increase the production of microchips by building a full production cycle. India will invest 11 billion in import substitution of semiconductors.

As you can see, all the world's leading economies are actively preparing for problems in Taiwan. (The only pity is that Russia is not on this list.) When is a real special operation possible for China to return its rebellious island?

Then, when the main actors, China and the United States, are ready. It is from these terms that it is worth dancing in building forecasts for the Chinese NWO.
Reporterin Yandex News
Reporterin Yandex Zen
29 comments
Information
Dear reader, to leave comments on the publication, you must sign in.