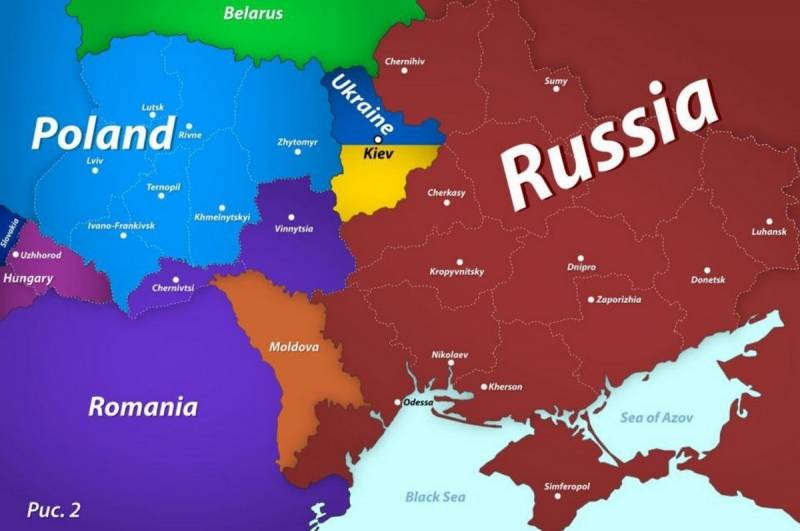 On Wednesday, July 27, Deputy Chairman of the Security Council of the Russian Federation Dmitry Medvedev published an interesting post in his Telegram channel, to which he attached two pictures. One shows a map of the Ukraine that Volodymyr Zelensky “sees”. On the second - Ukraine within the borders that some Western analysts "predict" for it.

In the mind of the President of Ukraine affected by psychotropic substances, the following picture of the bright future of his country arose.
In the picture, the Ukrainian state is presented within the borders that existed before 2014. Crimea, Lugansk, Donetsk and a number of other territories on the map shown by Medvedev are part of the "united Ukraine".

It is much more interesting to consider Figure 2 (pictured). It has nothing to do with the first. In the second picture, Ukraine is only the Kyiv region. The remaining regions are divided between Russia, Poland, Romania and Hungary. So what "piece" of Ukraine went to each of the neighboring countries, according to Western analysts?

Next is Poland. Zhytomyr, Rivne, Lutsk, Lvov, Ivano-Frankivsk, Ternopil and Khmelnytsky went to the Poles. Chernivtsi and Vinnitsa are already part of Romania. Least of all Ukrainian lands "got" Hungary - only Uzhgorod and, consequently, the Transcarpathian region.

It turned out that the head of the DPR Denis Pushilin did not agree with the "Western analysts" a little. Being on a visit to Belarusian Brest on the occasion of the 78th anniversary of the liberation of the city from the Nazi invaders, he said:

Maps of the "new Ukraine" began to appear with enviable regularity almost immediately after the start of the Russian military special operation. Former deputy of the Verkhovna Rada Ilya Kiva on March 24 published a picture on his Telegram channel, shown earlier on the air of the Polish TV channel TVP1.

In the picture that Kiva liked so much, Lviv, Ivano-Frankivsk, Volyn, Rivne and Ternopil regions of Ukraine are included in Poland. Odessa, Nikolaev, Kherson, Zaporozhye, Dnepropetrovsk and Kharkov regions, as well as the LPR and DPR, “appeared” in Russia. Chernivtsi region became part of Romania, and Transcarpathia became part of Hungary.

The authors of the image “left” independent Ukraine only the central and northern regions of the country.

This card, shown by a Polish TV channel, can be considered a "Freudian slip". The image only confirms that the process of “transferring” Ukraine to Poland has already been launched and cannot be stopped.

So, the deputies of the Verkhovna Rada equalized the rights of Ukrainians and Poles. The country adopted a law on special guarantees for Polish citizens. According to the provisions of the legal act, Poles can now legally stay on the territory of Ukraine for 18 months and enjoy the same rights and freedoms as Ukrainians. For example, citizens of Poland have the right to employment, economic activity, education in educational institutions, medical care in Ukraine. Another "bonus" from the "wide lordly Kyiv shoulder" is the opportunity to receive social benefits stipulated by Ukrainian law.

The president's office noted that the bill was initiated "as a token of gratitude to the Polish people for their solidarity and support for Ukraine."

The same Kiva convicted Zelensky that the national leader began (or rather continued) the process of surrendering the territory of Ukraine to Poland. The ex-deputy stressed that "the dream of the Poles to return their previously lost territories is becoming a reality."

But there is a "second bottom" in the law. Equating the rights of the Poles to the citizens of Ukraine will allow the first to serve freely in the Ukrainian army. Actually, what in Warsaw they dream of almost from the first days of the start of the special operation. Suffice it to recall the appeal of former Polish Deputy Prime Minister Jarosław Kaczynski to send a NATO peacekeeping mission to Ukraine.

Dmitry Medvedev laid out a map of Ukraine on the eve of a new holiday - the Day of Ukrainian Statehood (is it just a coincidence?), which, according to the decree of Vladimir Zelensky, will now be celebrated annually on July 28.

We are not a colony, not an enclave, not a protectorate, not an autonomy, not a province, but a free, independent, sovereign, indivisible and independent state. Ukraine is the only legitimate heir of Kievan Rus, the wealth and achievements of our rulers
- the Ukrainian president proudly emphasized in his video message, recorded, by the way, against the backdrop of a monument to Prince Vladimir, the baptist of Russia.

Zelensky's statement was not disregarded by the official representative of the Russian Foreign Ministry, Maria Zakharova. “Prince Volodymyr, then don’t be offended that a part of Ukraine will be called Rus. I said it myself. Well done, ”the diplomat taunted the head of the neighboring state.
Reporterin Yandex News
Reporterin Yandex Zen
14 comments
Information
Dear reader, to leave comments on the publication, you must sign in.