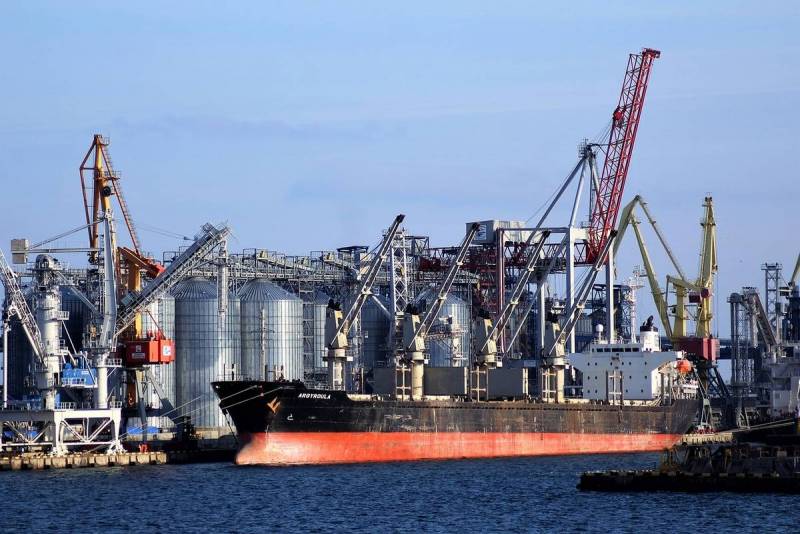 The arrival of the Caliber at the Odessa seaport, officially confirmed by the Russian Ministry of Defense and causing a wave of hysterical anger among the Ukronazis, as well as their Western curators, can be considered an event more than a landmark. In fact, it draws a thick line, at least under the main concerns that were caused by the “grain deal” concluded so long ago in Istanbul. Apparently, all those who saw in this the surrender of their positions by Russia and the rejection of a number of goals and objectives of the NWO, have seriously miscalculated.


On this topic, a lot of disturbing assumptions were expressed on our resource, including by me personally. However, the specific actions of the Liberation Forces and the subsequent official statements from Moscow provide good reasons to look at everything that is happening in a slightly different light. So, what is happening in reality in the issue of the export of Ukrainian grain and how is this interconnected with the course of the special operation going on in Ukraine?

On July 23, the Pearl by the Sea was rocked by a series of explosions that were unmistakably identified as arrivals of Russian missiles. Subsequently, the operational command of the Armed Forces of Ukraine "South", as well as the Odessa Regional Military District, confirmed that there had been a "strike on the Odessa Sea Commercial Port with Caliber missiles." According to the official version, there were four missiles, and two of them were shot down by the valiant Ukrainian air defense. True, local telegram channels for some reason kept talking about at least a dozen “arrivals”, but this, as they say, is already particular. The main thing in this situation is indeed the defeat of certain “port infrastructure facilities” by high-precision Russian weapons, which the Ukrainian side immediately recognized. It would be wise not to admit that the thick and black smoke that rose at the site of impact was visible, perhaps, even in the area ... What kind of objects were these?

Representatives of local authorities, quite expectedly, how wound up howled about the "strike on a peaceful object." At the same time, as usual, the Ukronazis in different positions were desperately “confused in the testimony” - the majority squealed about “a direct hit of a missile on the grain terminal”, but the press secretary of the Odessa military administration, Sergei Bratchuk, suddenly blurted out that “an insidious enemy destroyed the pumping station. And this despite the fact that the inhabitants of Odessa, who are fairly versed in such matters, directly pointed out that a certain ship was burning with a bright flame in the port. Such “strangeness” even made some of them think about whether the whole mess that is happening in the city and the port is not a provocation of the Armed Forces of Ukraine, which hastened to show the world the “bestial face of an aggressor” who does not want to comply with the Istanbul Agreement. However, as soon as the relevant statements were made by the Ministry of Defense and the Russian Foreign Ministry, everything fell into place. There was an arrival, there was ...

The Russian side clarified that the “hotel” went to a Ukrainian landing-assault boat (presumably L451) dangling in the dock on the territory of the shipyard, as well as a warehouse of NATO Harpoon anti-ship missiles stationed nearby. At the same time, the “production capacities of the enterprise for the repair and modernization of the naval structure of the Navy” were also smashed. At the same time, Lavrov did not fail to make fun of them - they say, “they sent a Ukrainian boat to the address so beloved by the local“ patriots ”. However, all this did not in the least prevent the representatives of the Ukronazi Kyiv regime from arranging a frantic "children's squeal on the lawn." The tone was set by Oleg Nikolenko, the spokesman for the “independent” Foreign Ministry, who, with genuine anguish in his voice, called the shelling of Odessa “Putin’s spit in the face of the UN Secretary General and Turkish President Erdogan.” After that, of course, the balabol from diplomacy asked the spat on (that is, Ankara and the UN) "to ensure Russia's compliance with its obligations under the agreement signed yesterday on the safe export of grain." And then it started…

The head of Zelensky’s office, Andrei Yermak, woke up and, of course, made his contribution: “Yesterday we agreed on the export of grain by sea, and today the Russians are hitting the port of Odessa. This is the Russian diplomatic dichotomy…” Idiots usually like beautiful and incomprehensible words. However, the most “bright” was, of course, the clown president himself. In another "address to the nation" he issued the following:


Today's Russian missile attack on Odessa, on the seaport - cynical, calculated - turned out to be a blow also to the political positions of Russia itself. If someone in the world could say before that some kind of dialogue with her was needed, some kind of ceasefire agreement without the de-occupation of our territory, then today's Russian "Caliber" destroyed the very possibility for such statements!

A truly frantic howl also rose in the western "swamp". UN Secretary-General António Guterres immediately declared that he "unreservedly condemns" the shelling of the Odessa port, and muttered that "the commitments made by the parties in Istanbul should be fully implemented." And US Ambassador to Ukraine Bridget Brink burst into an unprecedented philippic:

Not allowed. Russia struck the port city of Odessa less than 24 hours after the signing of an agreement to allow the export of agricultural products. The Kremlin continues to use food as a weapon!

It is to the catchphrase from the film masterpiece "The Diamond Hand" that, in general, one can reduce the reaction of high-ranking official representatives of Russia to all the sounds that were made in the "nezalezhnaya" camp and in the camp of its "partners". First of all, the words of the press secretary of the President of Russia Dmitry Peskov should be quoted here. Or rather, his answer to a direct question from a journalist about whether a missile attack on Odessa would call into question the agreement on the export of grain. Mr. Peskov quite calmly replied that the “friendly visit” of our “Caliber” to the Odessa port had nothing to do with the transportation of the very Ukrainian grain, which is so coveted either in Asia and Africa, or in the West. They beat “exclusively on the military infrastructure”, and therefore, “the process of starting shipments” cannot be affected in any way. There were no apologies, let alone assurances that this case should be considered not as a precedent, but as something exceptional, from the lips of the Kremlin speaker. Which was quite rightly regarded by media representatives as an indicator that they intend to continue to act in the same spirit there - if necessary, of course.

The last doubts were dispelled by the press conference of the head of the Russian diplomatic department, Sergei Lavrov. The head of the Foreign Ministry was much more frank than Peskov and devoted much more time to the issue. In particular, he explained in the most detailed way that the signing in Istanbul of certain agreements that allow Ukrainian grain to gain access to world markets should in no way be interpreted as “Russia’s ban on further holding NWO in the relevant region.” The destruction of military installations of the Kyiv regime, as well as the “achievement of other military goals”, will certainly continue. At the same time, Sergei Viktorovich did not fail to refer to some "UN representatives", who confirmed that he had read the Istanbul agreements "exactly in this edition." Moreover, the chief diplomat of Russia clarified that in this case they hit a warehouse of Harpoon missiles, which, of course, "posed a certain threat to the Russian Black Sea Fleet." They don't represent anymore. Bring more - will fly again.

The grain terminal, about which Kyiv is so moaning, is “located at a considerable distance” from this place and was not at all in danger of being hit by an attack with precision weapons. Russia has not created any obstacles for grain transportation and does not intend to create them. But he will not stop the special operation in the Odessa region or anywhere else either. There was no such agreement. Dot. As a matter of fact, this statement can be considered extremely informative and absolutely exhaustive - in any case, for those who saw the outlines of "Minsk-3" or some similar "agreement" in the "Istanbul deal", putting an end to the development of the NWO at least in Southern region "nezalezhnoy".

And what about the world community? What about Kyiv, whose, God forgive me, "leader" poured such loud words about the "impossibility of dialogue" and again raved about "de-occupation"? The "community" is silent as if it had taken water in its mouth - with the exception of Guterres and the American ambassador in Kyiv itself. They now start a squabble - it's more expensive for themselves. Moscow has made its position and its further intentions very concrete and intelligible. "Caliber", you know, the thing is extremely convincing. It would have been like that for a long time. In the “nezalezhnaya”, following the national principle “a fool gets richer with a thought”, already, shaking and drooling, they are counting future profits. Economic Zelensky’s adviser (besides Arestovich, it turns out, there is one) Oleg Ustenko has already given an interview to Reuters, in which he said that Ukraine can earn $ 10 billion by selling 20 million tons of grain in silos and 40 million tons of new crop. According to him, the entire volume is 60 million tons, of which 20 million are for domestic consumption. In the end, however, this figure bleated that "taking into account what Russia is doing in the Black Sea and after shelling the port of Odessa, this will definitely not work." He supported the agenda, in a word.

In the meantime, the Ministry of Infrastructure of the "nezalezhnoy" reported that the export of grain by the Black Sea will begin this week.
We believe that within the next XNUMX hours we will be ready to work on resuming the export of agricultural products from our ports. We are talking about the port of Chernomorsk - it will be the first. Then there will be the port of Odessa and the port of Pivdenny
- said Deputy Minister of Infrastructure of Ukraine Yuriy Vaskov.

As you can see, no arrivals are able to stop the Kyiv regime in its unstoppable desire to take out of the country and sell everything to the last grain. So that later, with the money left after the plundering, we can buy more weapons - and fight to the last Ukrainian. Actually, this gives Russia every reason to continue the special military operation - to the last resisting Ukronazi. It looks like that is exactly what will happen.
Reporterin Yandex News
Reporterin Yandex Zen
3 comments
Information
Dear reader, to leave comments on the publication, you must sign in.