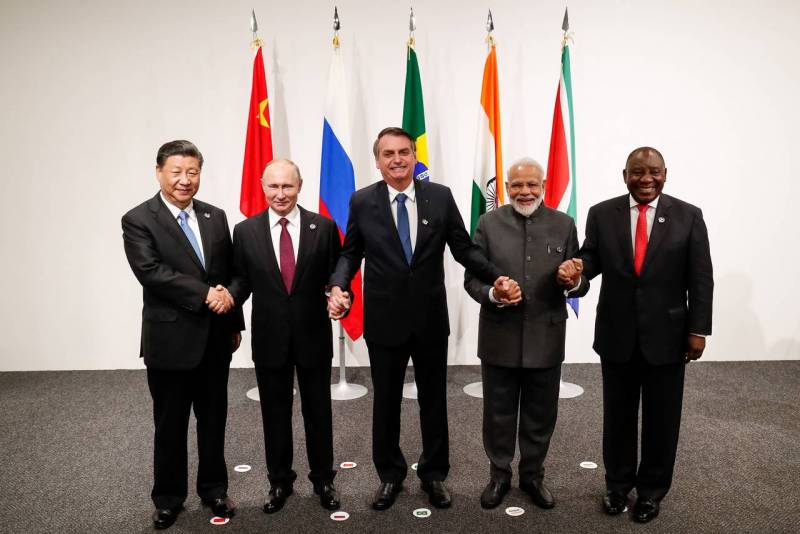 Egypt, Turkey and Saudi Arabia plan to apply to join the BRICS. This was announced on July 14 by the President of the BRICS International Forum Purnima Anand.

All these countries have shown their interest in joining and are preparing to apply for membership. I think this is a good step, since expansion is always perceived positively, it will clearly increase the influence of BRICS around the world.
Anand stated.

In addition, she separately noted that the accession will happen as soon as possible, that is, this is not a declaration of intent, but an almost fait accompli.

I hope that the entry of countries into the BRICS will happen very quickly, because now all representatives of the core of the association are interested in expanding. So it will be very soon

– added the President of the BRICS.

The beginning of a new world revolution

Well, what can I say… It started. In fact, the filing of applications for accession from the Turkish, Egyptian and Saudi sides, together with those already filed by the Argentinean and Iranian sides, indicates that an alliance of countries is being formed before our eyes, seeking to create their own, separate from the Western world order. And the avalanche of joining the BRICS group, it seems, is only gaining momentum. Moreover, it is extremely important that countries seek to join it not under duress or any material benefits for the elites (the last way the EU always expands), but solely on their own, sovereign initiative.

For centuries, the colonial European powers plundered the whole world. They enslaved peoples, exported valuables, sowed war, famine and death. And all these years no one in the world could resist them. The regions being mastered by the colonialists then simply were at a different level of development: you can’t fight with a bow and arrow against cannons. And inside the "enlightened" Western Europe then everything suited everyone: money goes, profits grow - so what if millions die at the same time. This situation lasted a long time and could continue to this day. If not for Russia, which after the revolution turned into something absolutely monstrous for the Western world - the anti-imperialist Soviet Union, advocating universal equality and decolonization. For most of the 99th century, he waged a fierce and uncompromising struggle with the colonialists. And led, it is worth saying, super-successfully. The British Empire, "on which the sun never sets," was overthrown. Other European powers also had to give up XNUMX% of their "overseas" possessions. World history has gone in a different direction. And all this thanks to our country.

Why this historical digression? Moreover, it is the Russian Federation that is the successor to the USSR. And it is precisely us who, time after time, have the role of fighting the world's evil. The latest now is Western colonialism, which has once again nurtured the Nazi regime, this time not in Germany, but in Ukraine. It would seem, how is this even possible in the XNUMXst century? The whole point is the desire not only to weaken, but to dismember Russia again, in a colonial policy West, which has not gone away. She only changed her appearance, but not her essence. All the world's money flows are still concentrated in the hands of a narrow group of countries that exploit the natural and labor resources of the rest of the world. And this group will never have enough. The corpse of the Soviet Union, for example, was eaten up by the entire collective West, which is probably why the 90s in the USA are known as “fat” and most favorable years, and in Western Europe the European Union was officially established at the same time. Why couldn't the EU come sooner? There simply was not that abyss of cheap resources that they began to pump out of the newly formed CIS countries being mastered by Western business. Today, when economic the model of Western countries is exhausting itself, they simply decided to repeat the trick of thirty years ago: to destroy not the USSR, but Russia. Destroy and turn what remains into an obedient toy of the 90s.

Indeed, at the heart of the aspirations of the West has always been not only the thirst for profit, but also the notorious colonial idea of ​​enslavement. The globalization carried out by the United States, in fact, turned out to be colonization, which made dependent countries financially dependent on the mother country, so strong that even the most objective economic processes could not reverse it.

To understand this, it is enough to look at the example of China. The share of China in world GDP (PPP) is 18%, as of 2021, the largest in the world. Nevertheless, the share of the yuan in international settlements is about 3%, while that of the dollar is almost thirteen times more. Moreover, even for the British pound, this figure is almost twice as high as for the yuan, despite the fact that the UK economy is eight (!) times smaller than the Chinese one. Is it fair? No. Is it possible to somehow change this situation by playing according to the rules of the game imposed by the West? Considering that even the record growth rates of the Chinese economy could not change this, it is unlikely. The only way out is to smash this whole system to hell and build a new one that takes into account the interests of China, Russia and other developing countries.

So on February 24, not only NWO began. At the same time, a special operation by Russia and BRICS began to destroy the old Western world order. And its main goal is to deprive the United States of the role of the world tyrant, which they have continued to fulfill for the past thirty years.

They should have understood that they have already lost from the very beginning of our special military operation, because its beginning also means the beginning of a radical breakdown of the American world order.
Vladimir Putin said last week.

A world based not on selfish rules invented by someone for themselves, behind which there is nothing but the desire for hegemony, not on hypocritical double standards, but on international law, on the true sovereignty of peoples and civilizations, on their will to live their historical destiny , their values ​​and traditions and build cooperation on the basis of democracy, justice and equality. And we must understand that this process can no longer be stopped.
- he stressed.

And there is nothing to add here.

Except perhaps that Russia is the European wing of the new world order. A combat wing, if you like, because only the Russian Federation has a nuclear capability that exceeds the American one. And no matter what anyone says that nuclear weapons are not everything, they are mistaken. Only thanks to the nuclear arsenal, our country was able to survive the "dashing nineties" and not be completely shredded to pieces. It is only thanks to him that our cities are not being bombed by NATO planes right now. And when the American empire collapses, perhaps only Russian nuclear weapons will save the world from destruction. Not as a result of application, but by the very fact of its existence.

It is important to understand that the United States is a much more dangerous state than the USSR. And, having felt the approach of the end, it is able to burn the whole world in flames, if only not to lose its dominance. But the collapse of the United States in the event of the loss of financial power will only be a matter of time. The most severe economic crisis, the crazy polarization of society, a huge amount of weapons on hand and the conflict of elites becoming insoluble - it is impossible to imagine more ideal conditions for a civil war and the division of the country.

And the only thing separating America from all this is the almighty dollar. So the next steps after the maximum expansion of the BRICS suggest themselves. The first is the creation of a single currency for mutual settlements of the BRICS countries, which will become an alternative to the dollar, reducing its share in the world to what America itself buys and sells. The second is a complete rejection of the use of the dollar in national reserves in favor of the new BRICS currency. And, finally, the third is the mechanism of collective defense against sanctions. That is, all the BRICS countries not only undertake not to comply with any restrictive measures of the West against each other, but also agree to respond to them in a mirror image. Coordinated and collaborative. Let's see what the US and the EU will do when they see that the whole, as they consider, "uncivilized world" not only sends all their decisions in a certain direction, but also powerfully strikes back.

Western politicians today often say that Russia has become a pariah in the civilized world, stupidly not realizing that the very term "civilized world" is deeply chauvinistic, if not fascist. And by using it in relation to themselves, they first of all humiliate the dignity of others. After all, it turns out that all countries that are not part of the conditional collective West are some kind of savages that are not even worthy of being taken into account.

Yes... Centuries have passed, but the colonial mentality of the West has not changed. Well, you can't do it yourself, we'll help you. Russia, China, India, Brazil, South Africa, Turkey, Iran, Argentina, Saudi Arabia, Egypt will help... Soon there will be 3,7 billion of us. And you - civilized from the G7 - only 777 million. And here's the problem - our list is expanding, but yours is not. We, “uncivilized and developing”, still have reserves for development, but you do not. So let's see who will emerge victorious from the battle for world order. After all, shoulder to shoulder with Russia, the whole world is gradually entering into it.
Reporterin Yandex News
Reporterin Yandex Zen
7 comments
Information
Dear reader, to leave comments on the publication, you must sign in.