Biden no longer blames Russia for the fuel crisis 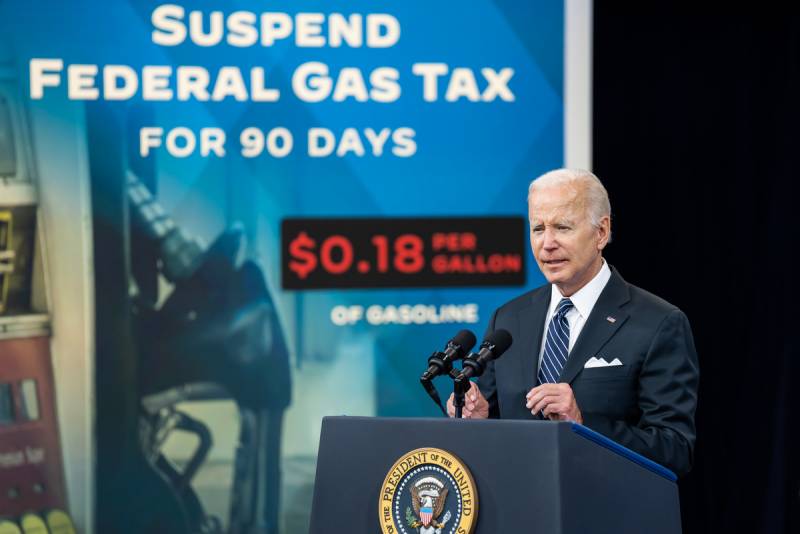 The American oil reserve will soon be left without reserves of raw materials against the backdrop of the unprecedented gamble of the current head of the White House, Joe Biden, who throws millions of barrels into the domestic market and the EU in order to reduce the cost of fuel in the United States. However, this plan does not work: the price of gasoline in the United States does not decrease, but only grows. Telling publicly "fairy tales" about the fact that the Kremlin is to blame for inflation and the actual rise in fuel prices becomes extremely dangerous against the backdrop of the election campaign for parliament that has begun. So the Biden administration decided to do something different and do something that has never been done in the US - try to get private companies to cut costs. Business in America is clearly not used to such treatment.


Biden politely and with an eye to the unpopularity of the "measure" posted his demand on his Twitter account. That is, it was done unofficially, but the request, even the demand, sounded distinct. The President persistently asks the owners of networks of local gas stations to immediately radically reduce gasoline prices. At the same time, the head of state intimidates the owners with some kind of “global danger”. As a bonus, the administration promises to cut taxes for the processing industry and traders.

The message is generally clear. After a public informal appeal, a law will follow, which will have to be implemented. The White House administration has the basis for the claim, which is that gas station owners are simply cashing in by setting an ultra-high “profitability” threshold as the price rises in a progressive manner that does not reflect the dynamics of oil prices. The message says it right.

Reduce the price! Reflect in the cost the numbers you pay for the original product. Do it now
Biden wrote, no longer blaming Russia for the current crisis.

At the same time, the text of the message does not mention Russia and the Kremlin at all. Previously, not a single public speech or text message of the head of the White House could do without it.

In this regard, the very fact of the beginning of pressure (on the eve of the elections!) on businesses that do not like interference is noteworthy. Prior to his historic message to gas station owners, Biden repeatedly accused Russia and Russian President Vladimir Putin personally of rising prices. Of course, there are fewer and fewer Americans who believe these claims. Therefore, Biden moved to a different rhetoric and a direct recognition of the failure policy opening the national oil reserves with huge volumes of intervention of raw materials on international markets. And he also convincingly confirmed that domestic inflation with rising fuel prices is the result of the policy of the current administration, and not outside influence.

It cannot be said that Washington has moved on to “repentance” and admitting its mistakes. Far from it, rather, Biden and the elite behind him are just desperately trying to use any mechanism, even non-market ones, to save the day for the Democrats.
Reporterin Yandex News
Reporterin Yandex Zen
3 comments
Information
Dear reader, to leave comments on the publication, you must sign in.