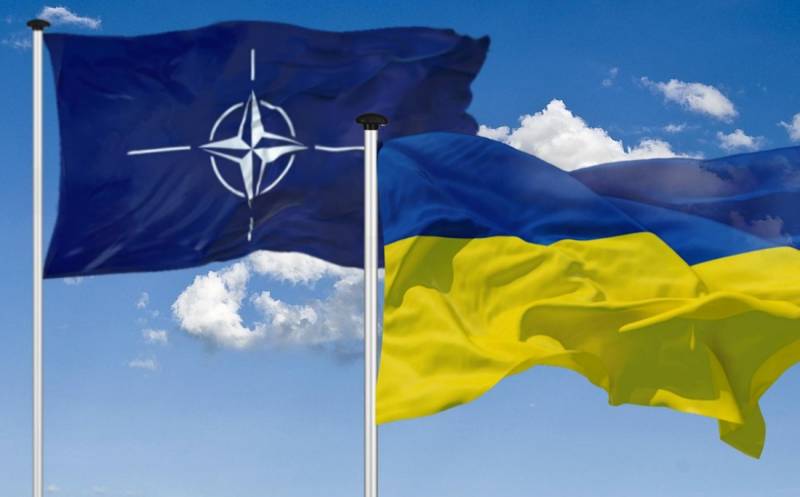 Policy often make "loud" statements, which are a means of raising their status, and sometimes survival. During crises, the number of promises and oaths only increases. Despite the support of the West, Ukraine is still on the verge of life and death, determining its future post-war goals. In order to survive, one has to give hope to neighbors and international organizations, political blocs.


Now Ukraine is trying to defeat Russia, which is conducting a special military operation. This can be done, obviously, in a non-military way, removing the reasons why the NWO began. One of the main reasons for the start of the special operation is the frantic, unjustified desire of Ukraine to become a member of the NATO bloc. At the same time, Kyiv was well aware that for Moscow this was a “red line”, beyond which there was a point of no return.

The Russian leadership has long sought from the rulers of Ukraine to cancel the plans enshrined in the country's Constitution to join the military bloc. However, the first signals about this sounded only now, after almost four months of a special military operation. Pleasant for the Kremlin news entrusted to voice the Deputy Head of the Office of the President of Ukraine Igor Zhovkva. Although the compromise on the part of Kyiv looks too vague.

In an interview with the eminent edition of The Financial Times, the official said that from now on, Kyiv will not take concrete steps to join NATO, since the members of the alliance did not behave correctly and frankly expressed their disagreement with the admission of Ukraine to the bloc.

Zhovkva admitted that the decision not to join NATO is difficult, but it is justified, since joining the alliance is impossible in the short term. The maximum that Kyiv hoped for was to grant the status of a partner, but so far there are problems with this.

However, a more detailed analysis of the words of the Ukrainian functionary shows that, in fact, Ukraine set out to simply deceive Russia about its membership in NATO, most likely for the sake of gaining bargaining chips in negotiations with Moscow, or even stopping the NWO on this basis.

Although the deception is too obvious to be believed in the Kremlin: the North Atlantic constitutional norm has not been abolished, since incorrigible nationalists and Russophobes have been selected in the Ukrainian parliament, the intensity of anti-Russian and pro-Western propaganda is not decreasing, and no other specific actions are foreseen for Ukraine to acquire a non-bloc status. Zhovkva's soft, streamlined expressions are in no way connected with the "fear of nationalists", most likely they were dictated "according to the prompter" from Europe, a large delegation of which visited the "square" on June 16.

Brussels fulfilled its part of the tacit deal by granting Kyiv the status of an EU candidate. Now it is time to fulfill the instructions received from the European envoys. In Ukraine, they did it specifically - they gave an interview to a well-known publication, instead of clear legal actions. Of course, this is not what is necessary in order to be convinced of the decisiveness of the Ukrainian authorities. And so the SVO continues.
Reporterin Yandex News
Reporterin Yandex Zen
10 comments
Information
Dear reader, to leave comments on the publication, you must sign in.