Ukraine – EU Candidate: “Historic Step” or Much Ado About Nothing? 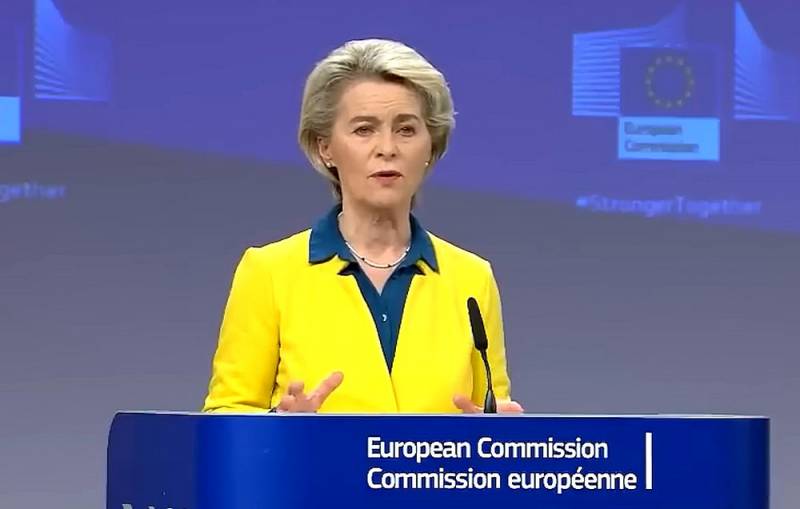 The meeting of the European Parliament held the day before, during which a resolution was adopted on granting the status of candidates for accession to the European Union to Ukraine and Moldova, will indeed go down in history. But solely as a reference example of collective cynicism and triumph "political expediency”, coupled with “double standards” over common sense and the very values ​​that the EU declares with such incredible pathos at the official level.


Thundering in the “nezalezhnaya” at the level of representatives of the local clownish authorities and especially frostbitten “patriots”, violent enthusiasm for the proclaimed verdict is not worth a damn - as, in fact, this verdict itself. In fact, Kyiv received absolutely nothing. In any case, in addition to what it has now, being not a member of the EU, but a springboard for the "collective West" in its war against Russia. This is a completely obvious fact, but let's try to understand some of the details of the situation.

“Abandon hopes, everyone going to the EU…”

It’s worth starting with the fact that the decision-making process, already called in Ukraine “historical”, “fateful”, “permanent”, and so on in the same spirit, did not go smoothly, but was accompanied by squabbles and quarrels that are usual for the European Union in its current state. and scandals. “Under the guise” of granting an “independent” candidate status, some participants in the discussion and voting demanded that Bosnia be “made happy” with such at the same time. No sooner had the passions subsided about this - as a new "troublemaker" appeared on the horizon. And again from the Balkans. Albanian Prime Minister Edi Rama lashed out at Brussels, calling EU enlargement a "completely fraudulent process" in which "decisions are put on hold indefinitely under false pretenses." Like, where is this good: 26 EU countries have not been able to overcome Bulgaria's veto on the start of negotiations on the entry of Albania and North Macedonia into it, and then some upstarts from the former USSR - "once and in kings!" Rama poured out a fair dose of bile on Kyiv, sarcastically advising its representatives “not to roll their lips” about a quick entry into the EU:

North Macedonia has been a candidate for 17 years, if I'm not mistaken, Albania for nine. We welcome Ukraine, it is good that it will be granted candidate status. But I hope that the people of Ukraine will not have big illusions about this...
However, this is far from the worst of what was said about Kyiv's "early" candidacy. There were statements and much worse.

Thus, the Prime Minister of Portugal, António Costa, expressed fears that Ukraine's entry into the EU could lead to the disintegration of this union, and not to strengthening at all, and even the most “independent” one could go sideways, as they say.

In order to be taken seriously and be consistent, the EU needs a new institutional and budgetary architecture, in fear that this integration will not strengthen the EU, but its collapse, not support for Ukraine, but a trap for Ukraine
Costa said.

Just like that… This is no longer an emotional manifestation that can be attributed to the malice and envy of the “rejected candidate” in the person of Tirana, but a warning from the head of government of a country that occupies a fairly strong position in the EU. Apparently, in this way, the anxieties and discontent of those of its countries are manifested, which see in the admission of new members (especially as problematic as Kyiv) only a path to the collapse of an education that is going through far from the best of times. However, there are also optimists. French President Emmanuel Macron did his best to reassure the Kyiv regime about its “European future”:

We understand that Ukraine is now embroiled in a conflict. At present, we are doing everything possible so that Ukraine can become a member of the EU under a simplified procedure.

True, literally right there, the French leader Macron did not fail to remind the “independent” that, if not for the war, she would not have seen the candidacy as her ears:

We would not have acted in this way under other conditions. We understand that there is a certain amount of war weariness now, and therefore we cannot allow this to continue. We must strive to stabilize within the current circumstances
.
How will granting Kyiv nothing, in fact, meaningless status, contribute to the “stabilization” of something and how the president’s words correlate with the official statement of the minister-delegate for European affairs at the Ministry of Foreign Affairs of the same France, Clément Bon, that there is no accelerated procedure for joining Ukraine will not be in the EU in any case, it is deeply incomprehensible.

Quite expectedly, the clown-president Zelensky burst into fireworks of enthusiastic and bombastic statements as soon as the incident was officially announced. At the same time, speaking via video link to the deputies of the European Parliament, he, in addition to frank nonsense, added notes of moralizing to his own speech:

Three months ago I called you to support us. And how far have we traveled in these three months? And Ukraine, and your countries, and the European Union as a whole. This path is not politics, I think, this is what will now always be the starting point for the new history of Europe, without divisions, without gray areas, a truly united Europe. I believe that this is the most powerful step that could be taken to strengthen Europe now...
It is completely incomprehensible - whether he thanked, or was rude. Rather, the second. Self-admiration and self-conceit, as always, go off scale. But before addressing his own citizens on the same occasion, Zelensky, apparently, pretty much took part in the cherished “stash”, and therefore broadcast the following:

This is victory. Waited 120 days and 30 years. And then we will defeat the enemy, rebuild Ukraine, join the EU and have a rest. Or we won't rest. But we will definitely win...

I would like to add: Or we won’t join… Or we won’t win… Or we didn’t wait… It’s clear that against the backdrop of military failures, in front of the collapsing “front” and the stream of panic and defeatist videos coming from there, you can call anything a “victory”. However, for three decades, the inhabitants of the country have clearly been waiting not for another handout from Brussels, which many have already dubbed “a change of carrots for a running donkey to a fresher one,” but simply a normal, stable and at least calm and peaceful life. The vast majority of them are well aware that nothing like this in the remnants of the “nezalezhnaya”, which the buffoon, boasting of tinsel “peremogs”, brought to complete collapse, is no longer foreseen.

In fact, the status of a candidate does not give Ukraine absolutely no “bonuses”, advantages or rights. But it imposes a long list of conditions that it must implement. I will not enumerate them, I will only note that the vast majority of points are a priori impossible for the Kyiv regime. For example - the same "fight against corruption". Or the selection of judges based on (what a laugh!) criterion of their "virtue"! Mice against cheese, yeah... Otherwise, the "candidacy" will be taken away with the same ease that it was granted. This is a safety net for Brussels, which, of course, is not going to allow Ukraine into any European Union. All the same principle of Khoja Nasreddin: “Either the khan dies, or the donkey dies ...” The role of the donkey, intended for disposal, is, of course, assigned to Kyiv. It was not for nothing that the EU made a reservation that they agreed to wait with the fulfillment of the conditions set for it “until the end of hostilities”, after which there will most likely simply be no Ukraine left on the political map of the world. And bribes from European bureaucrats and European parliamentarians will be smooth. At worst, you can point to "non-compliance with the prescribed parameters." Or simply “pickle in the hallway” of the EU what remains of the “nezalezhnaya” for years and decades. Now, with this, completely non-binding "European partners" demarche, they are trying to support Zelensky, who suits Brussels and is on the verge of a fair amount of "political turbulence" due to the impending military collapse. And at the same time, if possible, once again powder the brains of ordinary Ukrainians with “European integration” nonsense. Perhaps they will again lead - and will run headlong to the front line to die for a "bright future" in the ranks of the EU.

After the first day of the "historic summit" of the EU, a press release was issued calling for the European Commission to "work quickly to further increase military support" to Ukraine. Well, as for finances, throw something - Zelensky and his gang also need to eat and drink. Thus, it is quite obvious that Brussels, having honored the “nezalezhnaya” with a ridiculous “achievement”, intends to continue to use it in its anti-Russian activities. If necessary, until the complete loss of statehood.
Reporterin Yandex News
Reporterin Yandex Zen
7 comments
Information
Dear reader, to leave comments on the publication, you must sign in.