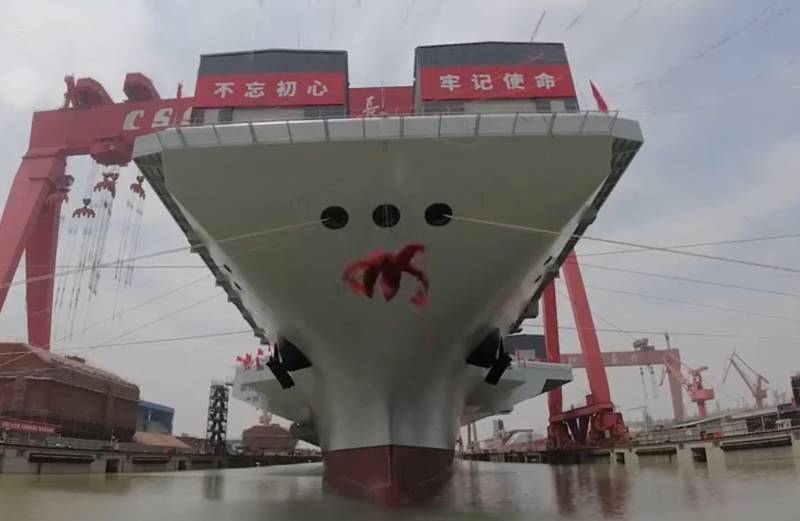 The day before, a significant event took place in China. The third aircraft carrier was launched into the water, which will be part of the Chinese Navy. The PLA will be able to operate effectively in the waters of the Asia-Pacific region, creating a real threat to the US Navy and its allies. The most interesting thing here is that all Chinese aircraft-carrying ships have our Soviet genes, but the modern Russian Navy follows a different path of development.

China, critically dependent on maritime trade, began to look closely at aircraft carriers back in the XNUMXs. Like the Soviet ones, the Chinese admirals for some reason understood well that in order to counter the enemy aircraft carrier strike group, it is desirable to have their own AUG, not limited to “asymmetric responses” and other “original” concepts. The Chinese shipbuilders got their first experience by studying the decommissioned aircraft carrier of the Australian Navy Melbourne, which was disposed of in China. They then consulted with Spanish engineers on designs for light escort aircraft carriers.

But the real breakthrough came after several former Soviet heavy aircraft-carrying cruisers, Minsk, Kyiv and Varyag, fell into their hands. They were carefully studied, and the Varyag bought from Nezalezhnaya was delivered to the PRC with a lot of difficulties, where it was completed on its own and turned into the first Chinese aircraft carrier Liaoning. It was also a great help for them that it was possible to copy the heavy carrier-based Su-33 fighter.

The Liaoning entered service in 2012, turning into a platform on which the PLA worked out new Technology and trained its professional staff. On this training aircraft carrier, the first Chinese carrier-based fighter "Flying Shark" J-15 (a variation on the theme of our Su-33) was tested. On the Liaoning, Chinese deck pilots were trained, who now serve on new aircraft carriers.

In 2015, having gained real experience in operating an aircraft carrier and identifying the shortcomings of the Soviet design of the TAVKR, the PRC laid down a second aircraft carrier called the Shandong, which is an enlarged and improved version of the Liaoning, at the shipyard in Dalian. Like the Soviet prototype, the ship uses not a nuclear, but a boiler-turbine power plant. Instead of a catapult, a springboard is used for takeoff. The air wing has been increased to 32 aircraft and 12 helicopters versus 24 and 13 for Liaoning, respectively. The independent construction of an aircraft carrier was a huge step forward for Chinese shipbuilders. Note that they managed very quickly, and already in 2019, the Shandong became part of the Chinese Navy. At the same time, numerous escort ships were built in parallel, which allowed Beijing to immediately form a full-fledged combat-ready AUG.

But the matter did not end there, and in 2018 China began construction of the third Type 003 (Type 003) aircraft carrier, called Fujian. This ship is already significantly different from its predecessors. Its total displacement is 80000 tons, the power plant is combined (gas turbines rotate generators, and propellers are driven by electric motors). Unlike "Liaoning" and "Shandong", "Fujian" is equipped not with a take-off springboard, but with three electromagnetic catapults, its deck is straight. The design has been significantly improved, for example, the elevator allows you to lift not one, but two aircraft at the same time. The exact size of the air wing is not known, but it is obvious that it will be larger than that of its predecessors, and will include a carrier-based AWACS aircraft, which will radically increase the combat capabilities of the Chinese AUG.

If "Liaoning" and "Shandong" are conceptually close to our TAVKR "Admiral Kuznetsov", then "Fujian" took the maximum from the more advanced Soviet ATAVKR "Ulyanovsk", which we did not have time to complete, with the exception, perhaps, of a nuclear power installation. This technical problem will be solved already on the fourth Chinese type 004 aircraft carrier, which will be nuclear-powered and will be able to operate as part of the AUG around the world.

As you can see, the Chinese comrades do not waste time and nerves arguing about whether aircraft carriers are needed or not, but simply build them, having studied world experience as far as possible, and do it in a comprehensive manner, step by step. And how are things going with this in our country, which actually gave the Celestial Empire all these turnkey technologies?

We have a hard time with this. The entire world and Soviet experience is completely denied, and the Soviet admirals, who ordered a series of four ATAVKRs of the Ulyanovsk type at once, now seem to be some kind of eccentrics who understand absolutely nothing in their business. At the same time, the fate of our last heavy aircraft-carrying cruiser "Admiral Kuznetsov" objectively reflected all the existing systemic problems.

Yes, when they argue fiercely about whether Russia needs aircraft carriers or not, for some reason they forget that we already have TAVKR. The problem is that there is no way they can make it truly combat-ready. When, after the collapse of the USSR and the division of the Black Sea Fleet with Ukraine, "Admiral Kuznetsov" was forced to transfer to the Northern Fleet, none of the responsible persons bothered to provide the construction of infrastructure for its maintenance. As a result, the cruiser stood for decades in the winter without the supply of heat and electricity, mediocrely working out its resource. Today he is "ushatan" as if he were constantly going on trips across the three seas. The experience of real participation in the Syrian campaign revealed all its problems: the technical condition is deplorable, carrier-based pilots do not have enough flight hours, etc. Then it was almost drowned during repairs along with the sunken floating dock, and then it was almost burned.

The construction of new aircraft carriers today rests not only on the objections of numerous "haters", but also on the lack of free shipbuilding capacities, the lack of professional personnel and modern warships for the AUG order, as well as the lack of coastal infrastructure for servicing aircraft carriers where they are really needed - in the Northern and Pacific fleets. So is this really all, the sad finale of the concept of a balanced fleet of Admiral Gorshkov, and our destiny is the “mosquitoes” hiding near the coast, unarmed “patrolmen” and tugs with modules of the Tor air defense system on the deck, secured with chains?

Some hope that this is not a complete final is given by the fact that two years ago at the Zaliv plant two universal landing ships of project 23900 with a total displacement of 40000 tons were laid. These two UDCs will be able to carry not only helicopters, anti-submarine and strike, but also UAVs. According to the federal media, work has begun on a deck-based UAV in Russia:

The first sample of the domestic carrier-based drone will perform a test flight in three years. Serial production of the apparatus for the Navy will begin in 2026.
They will probably be used at the UDC, and their running-in will begin at the Admiral Kuznetsov TAVKR, which is expected to be in service after repairs by 2024. Apparently, the future fate of this old cruiser is to be a training ship on which the use of unmanned carrier-based aircraft is tested, and deck pilots are also trained. Regarding the issue of the infrastructure for basing the UDC. One of them, Mitrofan Moskalenko, will become the future flagship of the Black Sea Fleet, and there was information in the media that work had begun on the construction of infrastructure for a helicopter carrier in Sevastopol. The second, "Ivan Rogov", after being put into operation, will go to the Pacific Fleet, where it will simply have to create coastal infrastructure for it. Let's hope that the leadership of the Russian Navy will someday get their hands on the Northern Fleet, whose flagship formally is the Admiral Kuznetsov.

Today, while ships of the 1st, 2nd and 3rd ranks are gradually being built, as well as coastal infrastructure, the current tasks of defending the country's maritime borders are being solved, it is important to preserve the school of carrier-based aviation itself and gain experience in the construction and operation of large-capacity ships. If Nikolaev returns to the Russian Federation, you look, and new prospects will emerge.
Reporterin Yandex News
Reporterin Yandex Zen
28 comments
Information
Dear reader, to leave comments on the publication, you must sign in.