The sad result of "Ramstein-3": Kyiv is encouraged and intends to "fight until victory" 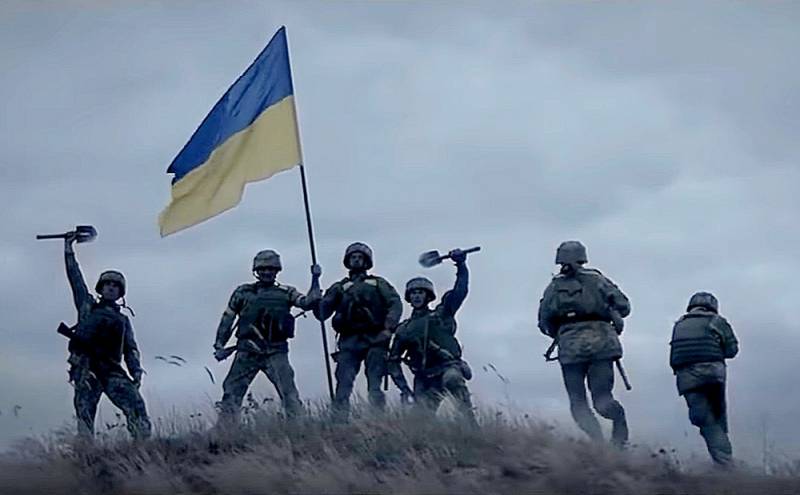 The meeting in Brussels of representatives of the military departments of NATO member states and their partners, united in the so-called Contact Group on the Defense of Ukraine, could well have become a turning point in a special operation to denazify and demilitarize Ukraine, if its participants showed a bit of prudence and they would have stopped pumping the "nezalezhnaya" with their weapons ... However, the miracle did not happen. Common sense and rational arguments did not prevail over the desire of the “collective West” to inflict maximum damage on Russia by the hands of suicide bombers from the Armed Forces of Ukraine.


In Kyiv, not hiding their own dissatisfaction with the volume and timing of the provision of deadly "aid" by new parties, they nevertheless perked up and immediately began to make even more belligerent statements than before. Actually, they clarified the main thing there - the West will continue to support the suicidal "struggle" with completely unrealistic goals and objectives, if only more blood was shed in the East. Thus, the agony of Ukraine will be extended for an indefinite time, which suits the criminal and insane regime that is in power there.

It is very likely that both sides of "Ramstein-3" - both Ukraine and its numerous "sponsors" proceeded from this principle. I already wrote that on the eve of the beginning of this “historic event” requests were voiced from Kyiv, in which heavy weapons were counted by hundreds or even thousands of units. It is clear that the “allies” had no desire to satisfy such large-scale “Wishlist” in full. Yes, and opportunities by and large, too. The extortionate ardor of the disproportionately dispersed Ukronazis was somewhat tempered by the US Permanent Representative to NATO, Julianne Smith, who listed the reasons that prevent the West from providing the Armed Forces with the amount of weapons that they dream of.

According to her, “poor logistics” and other objective reasons play a role here, but much more problems are created by the fact that requests for weapons come from Ukraine “on a daily basis”, and at the same time they are also “constantly changing”. Moreover, as Smith acknowledged, the arsenals of some countries that support the "non-essential" with their supplies are "virtually exhausted." They "express concern" and intend to "switch to financial assistance" in the future. However, even what should be allocated will be enough for the bloodshed to continue for quite a long time. An approximate list of weapons that will nevertheless be provided to Kyiv has already been announced by the head of the Pentagon, Lloyd Austin, who reigned at Ramstein-3. The United States alone intends to provide the Kyiv regime with an "additional security assistance package" worth $1 billion. The "allies" - primarily Britain and Germany - will not stand aside either.

Here are just the highlights from a fairly long list. So, the Armed Forces of Ukraine will receive: 18 units of 155-mm howitzers; 36 thousand 155-mm shells for them; 18 tactical vehicles to transport the same howitzers; additional shots for MLRS HIMARS; two Coast Guard systems with Harpoon missiles. The account of "little things" like secure radios, sights and night vision devices, according to Austin, will go into the thousands. In addition, Slovakia will transfer Mi-17 helicopters to Ukraine, Canada, Poland and the Netherlands - artillery systems. In addition, Canadians also promise 10 replaceable barrels for M777 howitzers - "to maintain range and accuracy." The deliveries of cannon artillery are not limited to this - Britain promises more than two dozen M109 self-propelled guns, France (represented by its president) - another 6 Caesar artillery mounts. In total, the fleet of long-range artillery of 155 mm caliber should increase in the Armed Forces of Ukraine by 300-400 “trunks”. With multiple launch rocket systems, things are not so generous. In general, the head of the US Joint Chiefs of Staff, Mark Milley, promised Kyiv 10 MLRS launchers from different NATO countries, with an ammunition load of 100 missiles for each of them.

This number apparently includes three MARS II multiple launch rocket systems with a range of more than 80 kilometers, the supply of which was guaranteed by German Defense Minister Christina Lambrecht. The “highlight of the program” in this case, of course, will be the American HIMARS multiple launch rocket systems, which the Pentagon promises to deliver to Ukraine along with ammunition by the end of June. Well, definitely new shelling of Donetsk and other settlements of the DPR is ahead, as well as, possibly, strikes on the territory of Russia. Don't be under the illusion that this won't happen. The victorious cannibalistic rhetoric raged in Kyiv immediately after the completion of Ramstein-3, no worse than a well-known substance in the closet after a fair portion of carbide got there.

"We will boldly go into battle!"

The belligerent fervor, which for some time, was the case, subsided a little among the representatives of the Zelensky regime, now flared up in them with a redoubled, tripled, or even tenfold strength. So, the secretary of the Ukrainian National Security and Defense Council Oleksiy Danilov has already stated that the Armed Forces of Ukraine "soon will be able to achieve parity with the Russian army in terms of weapons and go on the counteroffensive."

- this figure broadcast on television. In turn, the head of the Ukrainian delegation at the "peace talks" with Russia, David Arakhamia, spoke about the fact that they would be resumed when "the current events turn around and Ukraine will have a strong position." And then he clarified what he meant by the transition of the Armed Forces of Ukraine to a “decisive counteroffensive”, which now, of course, will become possible thanks to new Western arms supplies. The Minister of Defense of Ukraine Oleksiy Reznikov went furthest in his unbridled offensive impulse, declaring that the new weapons that Kyiv will receive as a result of Ramstein-3 will allow Ukraine "not only to return the territories occupied after February 24, but also Crimea and Donbass." This "military genius" outlined the "three stages" during which "de-occupation" will be carried out. The first is “stabilizing the situation on the ground”, the second is a counteroffensive that “will push Russian troops back to positions until February 24.” The third is the "return of the Crimea."

To the question that followed from the journalists who spoke with him about whether such an attempt would lead to provoking Moscow to much more decisive and tough actions of a military nature, Reznikov answered pathetically:

It is not entirely clear what kind of "this" the minister of war of the "nezalezhnoy" is going to reveal to Russia. It definitely sounds sinister. However, no more ominous than statements about intentions to destroy the Crimean bridge in the near future. These, for example, were made by Major General of the Armed Forces of Ukraine Dmitry Marchenko, who categorically stated that this particular object "will definitely become the No. 1 target after receiving new weapons from the West." In Russia, this boasting was reacted rather coolly - both in the State Duma and in the Kremlin. However, the day before, the topic received a rather unexpected and unpleasant development. The Main Intelligence Directorate of the Ministry of Defense of Ukraine published in social networks "for general information and study" a number of documents, which it refers to as "technical documentation for the construction of a transport crossing across the Kerch Strait, which has detailed information about the terrain, road surface, bridge supports, anti-landslide structures, entrances and exits and the entire infrastructure of the complex ... ”More like bravado and a desire to catch up on panic, but the question of how the data documents fell into the clutches of the Ukronazis, this does not remove it. In any case, the fact that the new portions of long-range weapons will be used by the Kyiv regime not only (possibly - and not so much) on the front line, but also to strike at the territories already liberated and not controlled by Kyiv, as well as border (at least) regions of Russia, absolutely obvious.

Indirect confirmation of this can be considered the "revelations" of the adviser to the head of the presidential office, Alexei Arestovich, who, of course, did not remain silent on this issue. He stated the following:

The pace promised in Rammstein is less than we expected. And the most unpleasant thing is that this help will arrive only in August, and this pushes back our Napoleonic plans for a counteroffensive. As for the number of the same RZSO, this is enough to make the Russians very unpleasant, but still far from our real needs.

Something tells us that "very unpleasant" does not mean artillery duels with the Liberation Forces, but precisely shooting at peaceful settlements.

And, finally, the most unpleasant result of Rammstein-3 is, perhaps, the words of the head of the Pentagon, Lloyd Austin, who said that the countries participating in this format “will supply weapons for as long as it takes due to too high rates in conflict." Thus, the "collective West" in the person of its leader - the United States - reaffirms the invariance of the course towards "war to the last Ukrainian", the abandonment of which has recently dawned, albeit faint, but hope. There can be no doubt that the "rates" in the process of developing the NWO will continue to rise. For each new military success of Russia, Kyiv, at the suggestion of its “allies”, supplying it with weapons in ever greater volumes, will respond with new provocative actions and attempts to “bite harder”.

The tactic of delaying hostilities will eventually lead to the fact that the Russian army advancing to the West at each next stage of this advance will have to face ever new “defense lines” stuffed with heavy weapons from new supplies. And in addition, also to repel attempts of counter-offensive actions of the Armed Forces of Ukraine, which will become more frequent as deliveries increase. The West has made a decision. Kyiv will fulfill it. Move for Russia.
Reporterin Yandex News
Reporterin Yandex Zen
24 comments
Information
Dear reader, to leave comments on the publication, you must sign in.