India on the brink of a major sectarian conflict 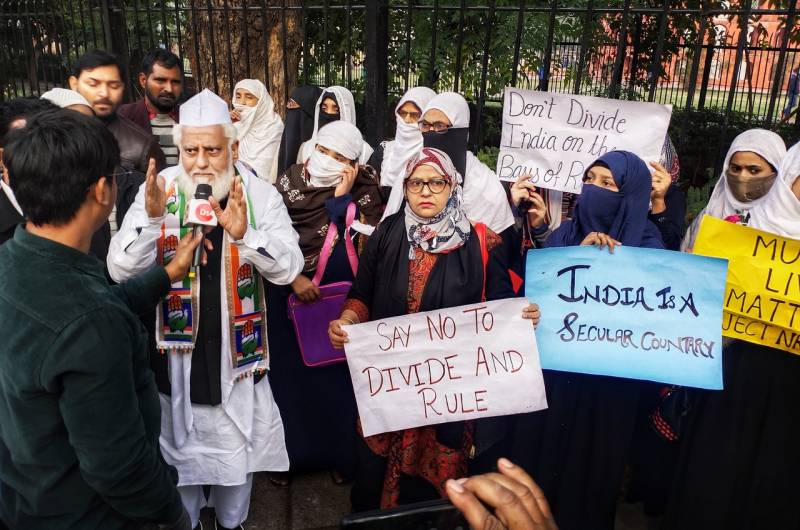 A few days ago, an international scandal erupted around the official New Delhi. The press secretary of the ruling party of India "Baharatiya Janata Party" in her interview insulted the Prophet Muhammad and his wife; then the words of the press secretary were duplicated by one of her colleagues in his personal twitter and soon became the property of all the surrounding social networks.


It is quite natural that such statements, and even from high-ranking officials, caused a wave of indignation in the Islamic world. The original messages were hastily deleted and the two instigators of the scandal fired, but the storm of indignation had already gained momentum.

A cup of halva and a barrel of tar

Recently, there has been some rapprochement between India and the countries of the Persian Gulf, primarily Saudi Arabia and Iran. The most important aspect of cooperation was, of course, energy supplies; the Saudis also made plans to invest in the Indian the economy, and Iran intended to build an "Indian route" to circumvent sanctions.

A few harsh words on the Internet have put this whole long and difficult agenda under a huge question mark. The rupture of economic ties "from below", in fact, has already begun: goods of Indian origin began to disappear from store shelves and markets in Arab countries.

It is much worse for the Indians that the “top” is also leading to a break. A sharp condemnation was made by the press service of the Organization of Islamic Cooperation, which includes 57 states around the world. In addition, many countries, including Iran and Saudi Arabia, protested through the Foreign Ministry. Of course, Pakistan expressed extreme irritation. The Islamic clergy are stirring up passions, several important representatives of which made statements and sermons against India, which were picked up by lesser clerics.

Finally, terrorist organizations operating in the disputed territories of India did not stand aside. In the troubled state of Jammu and Kashmir, all the most dangerous groups have their supporters: Al-Qaeda, the Islamic State (both banned in the Russian Federation) and the Taliban. Despite the fact that they are now busy fighting each other for influence in Afghanistan and Pakistan, threatening New Delhi was literally “holy business” for them. It is likely that they will carry out a number of real terrorist attacks a little later.

In other words, "successfully" thrown religious insults became the catalyst for serious unrest throughout Asia. Its consequences can be so serious that some experts even speak of an ideological sabotage directed against India, similar to the one that the editor of the First Channel, Ovsyannikova, ran in front of the live camera with a poster against the SVO.

In the context of the Ukrainian conflict, the desire of the United States and Great Britain to plunge India into chaos for the sake of the subsequent weakening of Russia, which will be left without an important economic partner, is spoken of, and this version sounds quite plausible. The less common assumption that China may be behind the provocation, not interested in the growth of Indian influence, also has some basis.

The theory that the “Indian card” is part of a big intrigue by the British against... the United States, which they thus hope to draw deeper into the confrontation with China and bleed, and regain leadership in the Anglo-Saxon world and in the West in general, looks a bit exotic.

However, it may well turn out that in fact the provocation is directed in a completely different direction.

Indian society is permeated through and through with general segregation, the strength of which the countries of the victorious apartheid never dreamed of. The vestiges of the caste system, which are mixed with separation along national and religious lines, still have a huge influence.

The Muslim community in India is at the very bottom of the social ladder and under the most severe pressure. And so ethnically heterogeneous Muslims also face hardline Indian nationalism. One justification for the latter is a local variant of the "population replacement theory" according to which Muslims wage "sex jihad" by seducing Hindu girls and converting them to Islam. At the everyday level, communication between confessions is very tense; a mere attempt by a Hindu to enter an Islamic quarter can cost one's life, and vice versa.

India's population continues to be semi-literate (only about half are literate), but among Muslims this problem is more deeply rooted. Unemployment is also harder for them: the share of the unemployed is almost 10% higher than among the Hindus, and the employed work mainly in “unclean” professions - cattle slaughterers, cleaners, street vendors, etc. The share of Muslims in the state apparatus does not exceed 5% , and they occupy, with rare exceptions, the smallest bureaucratic posts.

This situation, not surprisingly, results in regular sectarian skirmishes, usually bloody. From time to time, clashes reach a grandiose scale.

The great Muslim pogrom in the state of Gujarat, which took place in 2002, is widely known. Then the Muslims stopped a train with Hindus in the city of Godhra, which, after a skirmish, were set on fire; 58 people died in the fire. In response, the Hindu population of the city, including women and children, flocked to the Islamic quarters. Starting with smashing cars and robbing shops, the Indians moved on to massacres of the locals, reaching such atrocities as mass rapes and burning women and children alive. The total number of victims among Muslims reached almost 800 people, the Hindus lost about 250 people, and there were up to 2500 victims.

Curiously, the current Indian Prime Minister Narendra Modi was the governor of Gujarat at the time.

However, one cannot personally call him the main nationalist - the ruling BJP party was originally openly nationalist in nature and methodically deepens segregation between Hindus and Muslims. In particular, a couple of years ago, the Indian Parliament passed a law giving the right to simplified citizenship to refugees from neighboring countries - everyone except Muslims by religion. This sparked protests from the Islamic minority, which resulted in another series of bloody riots in the winter of 2019-2020, for which the army had to be used to suppress.

Therefore, there is every reason to believe that the “careless statements” of the BJP spokesman have flopped into the information field right now, against the background of the global crisis, unrest in Iran and very serious instability in neighboring Pakistan. It seems that the Indian elite saw in the unfolding new redistribution of the world a historic chance for the "final solution of the Islamic question" and the victorious conclusion of the territorial dispute over the ownership of Jammu and Kashmir.

If this is true, then the current religious scandal is only the first link in a chain of provocations. Throwing the ball to the side of the enemy, the Indians will wait for a counterattack - a blow from the terrorists, which is most likely. He, in turn, will be a good casus belli for the campaign against Pakistan, torn apart by internal contradictions and already struggling to cope with the terrorist threat. American handlers, deeply bogged down in the Ukrainian problem, may simply not have additional resources to help Pakistan. The war will make it possible to finally crush, if not physically destroy, the Muslim community within India itself, using the exalted poor as a strike force.

If this scenario is close to the truth, then things can take the worst turn at any moment. A war on the border of three densely populated nuclear powers - India, Pakistan and China - promises big problems for the whole world.
Reporterin Yandex News
Reporterin Yandex Zen
5 comments
Information
Dear reader, to leave comments on the publication, you must sign in.