"Avoid disgrace." Washington is preparing to replace Zelensky with a more sane one 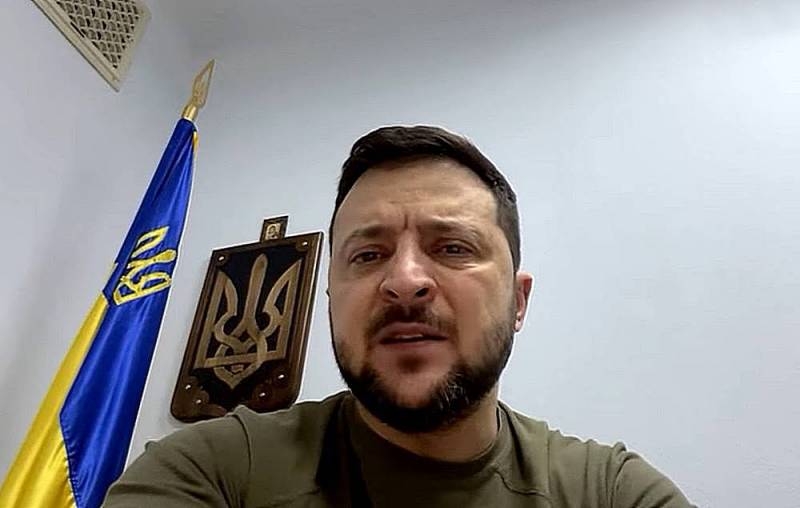 It has long been clear to everyone that the senseless and bloody resistance of the Kyiv regime will last only as long as it is considered necessary in the United States. If necessary, even to the last Ukrainian in the most literal sense of the word. At the same time, “bells” have been heard more and more clearly from across the ocean lately, from which it is time for the clown president to fall into complete despair. The “main allies” there seem to be beginning to realize that, having got involved in an almost open confrontation with Russia, they have chosen a burden beyond their strength.


Apparently, many officials of the American administration, including the head of the White House, are gradually approaching the realization that the Ukrainian adventure can end for the United States no less shamefully and ruinously than the Afghan one (and even surpass it in its negative consequences). Joe Biden, who not so long ago attacked Vladimir Zelensky with rather harsh and caustic criticism. The “Hegemon” is either thinking about curtailing (at least partial) the “Ukraine” project, or is wondering whether to replace the local “leader” with a less scandalous and sane one.

During a campaign to raise donor funds for the Democratic Party, held in Los Angeles on June 11, US President Joe Biden, in addition to the traditionally absurd accusations against Russia and its President Vladimir Putin personally (“he seeks to destroy not only the nation, but also the culture of Ukraine ”), attacked the leader of the “injured party” - Vladimir Zelensky with accusations. The head of the White House once again expressed his indignation at the fact that Kyiv "stubbornly refused to listen to his warnings" about the imminent start of hostilities. The implication of these words is perfectly understandable - they say, then you ignored our instructions, and now you are squeaking and squealing, demanding military assistance, and in ever-increasing volumes. And we warned you!

At the same time, it remains somewhat incomprehensible what, in the opinion of "sleeping Joe" and his administration, should have expressed "understanding" of the Ukronazi regime in this particular case? In delivering a "preemptive strike" against the same Donbass or Russian territory? In the construction of another "great Ukrainian wall", insurmountable not only for Russian tanks, but also for "Caliber"? Or, on the contrary, in the evacuation of civilians from potentially endangered settlements and regions? What did the Clown President and his “team” really have to do to avoid the current reproaches of Grandpa Joe? There are no unequivocal answers to these questions, but it is quite obvious what Kyiv, in the opinion of its overseas "partners", should NOT have done. We are talking here about the “pacifist” statements repeatedly heard from the lips of its official representatives, which were sharply discordant with the agenda that the West was promoting at that moment.

I remember that the presidential office, and even the eternally militant veterinarian Danilov, and some other Ukrainian policy. Like, all this is reinsurance, dear citizens, “there are no real signs of aggression”, live in peace. It even got to the point that some speakers from the "nezalezhnaya" allowed themselves even terrible sedition: they directly said that the "Western partners" were fanning the panic in order to "force Ukraine to make political decisions unfavorable for it." For example, to the implementation of the Minsk agreements. Particularly bright (which is not at all surprising) was Vladimir Zelensky personally speaking on this topic. His January speech “about kebabs” is now often remembered. In it, I remember, he called on the Ukrainians to the following:

What to do? Keep calm, cool head, self-confidence, in our army, in our Ukraine. Don't wind yourself up. Not shouting “everything is lost”, but knowing that everything is under control and everything is going according to plan ...

And in addition, he painted the most pleasant pictures of the future:

We will build roads, bridges, schools, stadiums, wagons, planes, tanks. We vaccinate most of the population. In April we will celebrate Easter, in May - the sun, barbecue, weekends, Victory Day. And then - summer, we will take the EIT. Going to universities, planning vacations, digging gardens, getting married, walking at a wedding ...
And finally, he promised to meet 2023 “without war”. It is in these same "kebabs" of the clown that everyone is now poking their noses - they say, so that you choke on them, great strategist, seer of figs! And what do you think, does Zelensky burn with shame and remorse about this? Nothing happened! In one of his interviews, he frankly admitted that he had information about impending events, but did not make "sudden movements" in order to ... "not fan the panic"! Literally like this:

This would affect our financial situation, budget and the economy. If we started preparations a year in advance, we would no longer have an economy. As for our army, it was ready.

A rotten excuse, but what is it.

It is clear that such performances of the fallen American clown simply infuriate the Americans. However, this is far from the only thing. The problem also lies in a number of other points. For example, in the absolute exorbitance of the extortionate demands of the Kyiv regime for military assistance. In my previous article, I already cited the “volumes of armaments necessary for the Armed Forces of Ukraine,” announced by Mikhail Podolyak, adviser to the head of Zelensky’s office. Let me remind you of only one position - from the "allies" he requires at least three hundred MLRS of NATO standards. So - in the arsenals of the US Army MLRS HIMARS, as of 2016, there were "already" 417 units. Whether there have been more of them by now is a big question, given the current state of the American military-industrial complex. Similar, but older multiple rocket launchers - M270 - the Americans at the same time had more than eight hundred. That is, whatever one may say, but in order to satisfy the appetites of Kyiv, Washington must be given either almost all the new MLRS, or almost half of the older systems. Will Pan Podolyak's face crack?

In the United States, they are already sounding the alarm about the fact that the massive supply of weapons to the “non-essential” forced the “bins” of the Pentagon to “show the bottom”. For some positions (the same MANPADS and ATGMs), a quick replenishment of stocks is physically impossible. That is why in the 40 billion “military aid package for Kyiv” adopted with scandal and squabbles in Congress, Ukraine proper should receive a maximum of 6 billion. Most of this impressive amount will be "poured" into the bottomless pockets of the American military-industrial complex corporations - and just to replenish the devastated arsenals. Whether the “nezalezhnaya” will get some crumbs from these orders is a very big question.

Directly from the Pentagon, very contradictory statements about Ukraine have so far been heard. On the one hand, the head of this department, Lloyd Austin, while on an official visit to Thailand, uttered the following with traditional pathos:
The United States, together with allies and partners from different countries, is ready to fully contribute to the implementation of the request of the Ukrainian side to equip its army with defense weapons to protect its own land ...

Austin also warmly assured those present that the United States and other countries will continue to make efforts to deliver "as much support as possible" to Ukraine as soon as possible and "help the AFU succeed." On the other hand, the same Austin did not give a direct answer to a specific question - whether the United States will increase the supply of MLRS and howitzers to Kyiv in the light of the successfully developing offensive of the Liberation Forces in Donbass. Instead, the minister began to weave verbal lace and repeat the general points that his country is "ready to provide Ukraine with everything it needs." And then he completely strayed into reasoning that the “nezalezhnaya”, in fact, has “partners from all over the world” who are ready to “really help” her.

As for the specific artillery, then Austin made a reservation that the Armed Forces of Ukraine had already "delivered a significant number of 155 mm howitzers and ammunition for them." You can take it any way you like. Including in such a way that Kyiv should hardly count on additional "trunks" (especially in the huge quantities voiced by the same Podolyak). Somewhat more reassuring for the Ukrainian regime can be considered the words of First Deputy Austin Kathleen Hicks that the Pentagon considers the issue of preserving the state of Ukraine to be “decided in the long term”. This lady also assured that the United States intends, together with NATO partners, to "develop the defense potential" of Kyiv, not only in terms of supplying it with weapons, but also in terms of "training the personnel of the Armed Forces of Ukraine." However, by and large, all these are also common phrases, so characteristic of Washington politicians and officials.

It must be said that in Zelensky's office they reacted to Biden's attack in their usual manner - that is, they began to snap in response. The press secretary of the Ukrainian president, Sergei Nikiforov, said that the phrase "did not want to hear," applied by the head of the White House to his patron, "requires clarification." Like, all the troubles happened because it was Zelensky, who called on the “partners” to introduce a “package of preventive sanctions to force Russia to withdraw troops,” they didn’t want to hear, and not for some other reason. The clown president himself voiced the same version of the answer in his recent interview with the ZDF television channel. Well, except that he expanded the list of claims against the “allies”: since you were so smart and knowledgeable, why didn’t you close the airspace over Ukraine? Why not armed to the teeth "in advance"?

According to some analysts, the growing irritation towards Zelensky from the “collective West” in general and the United States in particular is to a large extent caused by his boorish and extortionate manner of communicating with “partners”, from whom he no longer asks for anything, but insistently demands. Nevertheless, in Kyiv itself either they don’t understand this, or they don’t want to take it into account, continuing to be convinced that “everyone owes Ukraine”. It is quite possible that as the aggressively dependent rhetoric from the Ukronazi regime grows, the patience of the “partners” will still burst. And it would be better if it happened sooner rather than later. It’s better both for the West itself, which is investing tens of billions in an empty undertaking, and, above all, for the Ukrainian people, to whom the “help” provided by Zelensky and his gang brings only new suffering.
Reporterin Yandex News
Reporterin Yandex Zen
14 comments
Information
Dear reader, to leave comments on the publication, you must sign in.