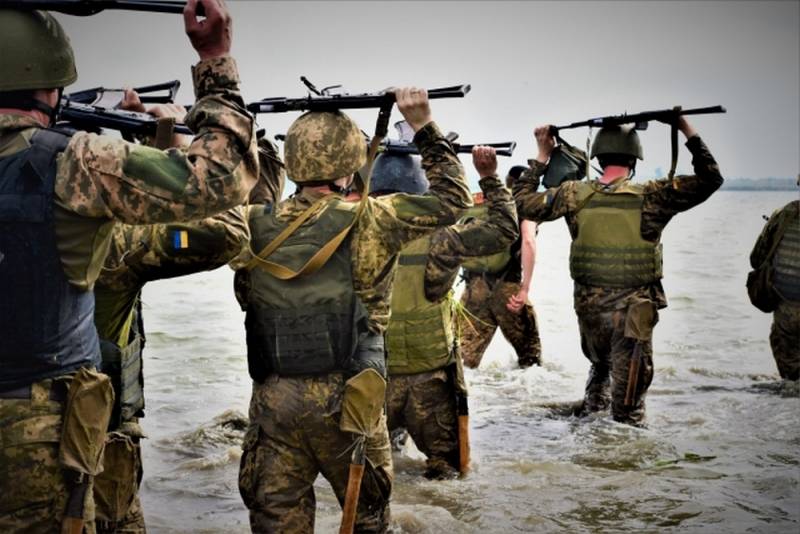 A soldier of the 18th battalion of the 35th brigade of the Naval Forces of Ukraine spoke about the losses incurred by the unit through the fault of the commanders.


So, during the counter-offensive and forcing the Ingulets River in the Nikolaev-Krivoy Rog direction of the front near the village of Velikoye Artakovo, the battalion commander was killed, his deputy was wounded, and the commander of the 1st company Badzai lost his leg and was out of action.

In addition, the serviceman who voiced these data reported the death of hundreds of his colleagues in battle. The soldier laid the blame for what happened on the commanders, who, with their inept actions, brought the situation to an extreme. The surviving soldiers therefore refuse to carry out further orders.


Earlier, a video was published on the Web in which the fighters of this unit turned to their command.

Meanwhile, Mikhail Podolyak, adviser to the head of the presidential administration of Ukraine, reported on June 9 that the Armed Forces of Ukraine are losing from 100 to 200 soldiers killed every day. According to Podolyak, the main reason for the heavy losses of the Ukrainian army is the military superiority of Russia, in connection with which the Armed Forces of Ukraine need a large number of artillery pieces. Kyiv, in this case, strongly hopes for the supply of long-range missile systems from the United States and Great Britain.
Reporterin Yandex News
Reporterin Yandex Zen
4 comments
Information
Dear reader, to leave comments on the publication, you must sign in.