The main results of the "European holidays" of Ukrainians 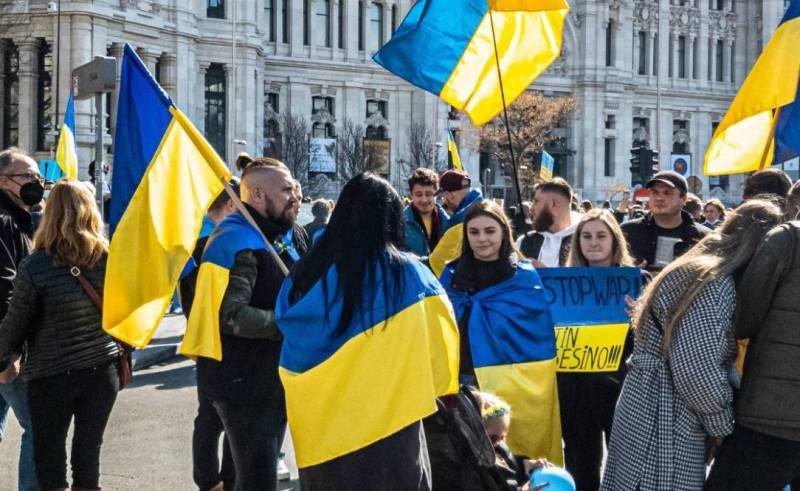 One of the first results of the start of the Russian special military operation on February 24, 2022, was that millions of refugees took off in Ukraine and rushed to Europe, whom she met with open arms. A lot has changed in just over three months. What are the main results of these "European holidays" for Ukrainians?

The “honeymoon” of Europe and the “horde from the East” that came from the East could not initially last too long. Millions of Ukrainians filled the Old World, hung the cities with their yellow-and-blue "rags", jumped in the squares and sang their national anthem, painted Soviet monuments in the colors of the "ensign", jointly came up with how to inflate the system more cleverly and, of course, demanded freebies. The patience of the local authorities and the population was enough for only three months.

The first to change the rules of the game was Poland, where the largest number of Ukrainian refugees arrived, over 3,57 million people. There is nothing to be surprised here: the countries have a common border, there is almost no language barrier, and Warsaw itself has spent years policies integration of able-bodied Ukrainians, considering them as cheap labor. Millions of migrant workers know the way to Poland, which is why the largest number of citizens of the Square moved there.

The problem, if you call a spade a spade, is that many people came there not to work hard jobs for little money, but for European freebies. Ukrainian refugees overloaded the entire social infrastructure of the state, forcing them to spend the budget on them. At the same time, not all of the newcomers are ready to go to pick strawberries or work at a fish factory. Not surprisingly, many Poles did not approve of what was happening, especially when faced with the arrogant behavior of a certain contingent of Ukrainians who came in large numbers. From July 1, Poland will abolish benefits for refugees, with the exception of pregnant women and women with many children, as well as disabled people, as stated by Deputy Interior Minister Pavel Schefernaker:

From July 1, the government will no longer pay benefits to refugees from Ukraine. We proceed from the fact that many people are able to adapt and earn on their own.

Apparently, this measure is aimed at gradually squeezing out of the country those who came to Poland “on vacation” at the expense of local taxpayers. The rest of the Ukrainians who are ready to integrate, learn Polish and work hard, Warsaw will accept.

The neighboring Czech Republic did the same, where 360 refugees moved. 90 of them settled in Prague, where the new holiday season is about to begin. Aggressive loafers roaming the streets, wrapped in yellow-blue "rags", are already very tired of the locals and interfere with the tourism business. Since June 15, the authorities have been closing the refugee registration center, making it clear that new ones will not be allowed in. Those who have arrived and want to stay, Prague intends to evenly distribute across all regions of the country. Apparently, it is planned to resettle the Ukrainians in the countryside.

The Bulgarian authorities were especially distinguished, where more than 150 thousand refugees from Ukraine moved. At first they were pitied and settled in hotels on the Black Sea coast. But the holiday season has come, and the poor Eastern European country needs beds for tourists who are willing to pay for them. A special “resort prison” was provided for Ukrainians: a field concentration camp fenced “for their own safety” with iron containers for compact living. This "creative" solution is positioned as temporary, but as they say, there is nothing more permanent than temporary.

In general, the freebie is really over. But why is it so important?

This is important because the myths about a certain “European choice” of Ukraine are being forcibly debunked in this way. If you look at the archival records of 2013-2014, you can see that in the minds of a great many citizens of Nezalezhnaya there were a lot of illusions about their prospects in the event of signing an agreement "on European association", Yanukovych's refusal of which became the formal reason for the Euromaidan. Ukrainians then naively dreamed of multibillion-dollar Western investments in their country, new high-paying jobs, "European" pensions of 1-2 thousand euros, freedom of movement in the EU and the rest of the world with a European passport, a cup of coffee at the Vienna Opera and "Sesame Bun" if you know what I'm talking about. But the reality turned out to be different.

Instead of investments, the collective West hooked Ukraine on a "debt needle". Not wages and pensions have risen to the European level, but utility tariffs and the cost of energy. Industrial enterprises are closed, having lost access to the Russian market. Medicine and the social sphere collapsed. The last thing that remained was the dream of a well-fed and prosperous Europe, which Ukraine is about to enter, and its inhabitants will immediately panic.

Those who have encountered Ukrainian refugees note that they can be conditionally divided into three groups. The first is bold and rich, with a lot of money and expensive foreign cars. The second is the impudent and poor, who wave their "rags", bawl the anthem, threaten to cut Russian women and children up to the seventh generation and paint Soviet monuments in yellow and blue colors. The third one is the real refugees who really fell under the distribution during the hostilities and lost their jobs and housing. They behave modestly and really try to settle in a new place and integrate. At the same time, for most of the representatives of the first two categories, war is just an excuse to shake something free out of Europeans. Such people feel great when they rent out their apartments in Western Ukraine for a huge amount of money to their own compatriots who are hiding from mobilization outside their place of registration.

And so they all rolled up to Europe for a “vacation”, and once again it turned out that tourism is one thing, and emigration is a completely different matter. No one in the EU is waiting for Ukrainians, except as cheap labor or buyers of expensive mansions. Who would have thought? In this context, it's not bad that Europe and Ukraine have got to know each other really well. To get rid of mutual illusions, some three months were enough.
Reporterin Yandex News
Reporterin Yandex Zen
9 comments
Information
Dear reader, to leave comments on the publication, you must sign in.