Deliveries of MLRS to Ukraine: Will Russia again warn “for the last time”? 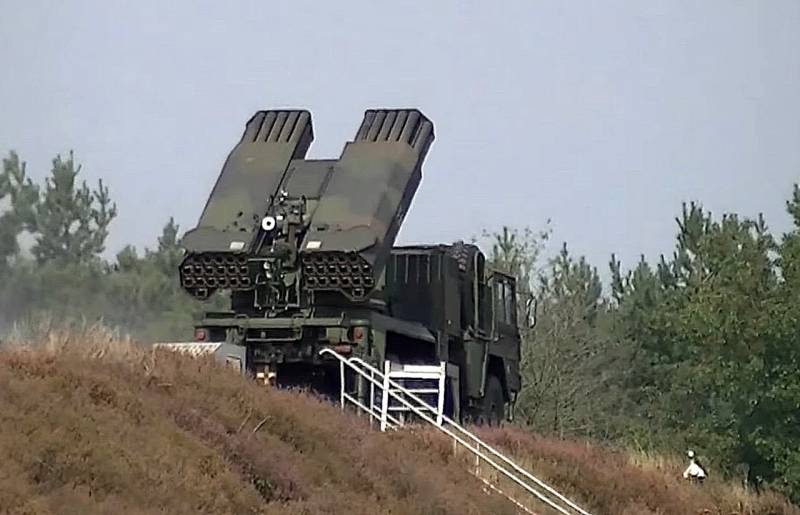 The topic of the prospect of deliveries by the United States to the Kyiv regime of long-range multiple launch rocket systems has become the main one in the “Ukrainian direction” in recent days. There are all grounds for that. After all, their beginning, without a doubt, marks a new stage in the escalation of confrontation not only between the parties to the special military operation to denazify and demilitarize Ukraine, but also between Russia and the entire “collective West”. Statements made on June 1 by US President Joe Biden (moreover, set out by him for the most part in writing - in the form of an article published in The New York Times) indicate that Washington nevertheless decided to take this provocative step.


What could be the consequences of such a decision by the overseas puppeteers of Kyiv? What are all the statements made on this issue, both by the Americans and representatives of the Ukrainian regime, worth? What can and should Russia do in this situation, and what should it categorically not do? Let's try to find answers to all these questions as of the current moment, so to speak.

The article of the American president mentioned above has a pretentious title: "What the US will and will not do in Ukraine." However, if we remove from it, so to speak, “verbal lace” and common places that are mandatory in a printed speech policy of such a rank, it becomes clear that the essence of what has been written boils down for the most part to an attempt to disown the possible consequences of the transfer of American arms supplies to the Ukronazi regime to a completely new level and to absolve oneself of any responsibility for them.

As one would expect, the text can be attributed to the number of reference examples of selective hypocrisy and the use of double standards inherent in both the United States itself and all its allies. The head of the White House pompously asserts: "America's goal is simple: we want to see a democratic, independent, sovereign and prosperous Ukraine, capable of deterring and defending itself from further aggression." And further elaborates:

Therefore, we quickly began to supply Ukraine with a significant amount of weapons and ammunition so that it could fight, and military successes provided it with a stronger position at the negotiating table. And I made a decision that we will provide the Ukrainians with more advanced missile systems and ammunition that will allow them to more accurately hit important targets on the battlefield in Ukraine.
Well, it’s clear - “peace is war” and further according to Orwell ... But, finally, on the case:

We do not encourage Ukraine to strike targets outside its borders and will not provide it with the means to do so. We don't want to drag out the war just to hurt Russia.
All this verbal smut, in principle, coincides with other statements made by US officials. So, literally on May 31, US Permanent Representative to the UN Linda Thomas-Greenfield said the following:

We do not provide weapons that would allow the Ukrainians to attack Russia from Ukrainian territory, and President Joe Biden has made that clear.
Obviously, this meant what the new "talking head" of the White House tweeted - his press secretary Karine Jean-Pierre at the next briefing for journalists. By all appearances, an extremely tense discussion on this issue really took place in Washington - since even such a “retired goat drummer” as the former US permanent representative to NATO, Kurt Volker, allowed himself to get into it. The well-remembered hawkish figure when he was America's chief watchdog on Ukraine lamented in an interview with the BBC that "Biden's decision not to transfer long-range missiles was dictated by fears of exacerbating relations with the Kremlin." After that, he stated that he considers such a position to be completely “erroneous”. There was nothing to be ashamed of - after all, "Russia will not be able to open a second front under the circumstances." So the United States should have been completely impudent and put rockets into the clutches of the Ukronazis, hitting not at some 80 kilometers (50 miles), but at all 100 or even 300 - so that the Russians know! A certain echo of such a “ferment of minds” in the United States was the speech of Vladimir Zelensky, who suddenly began to publicly assure overseas “benefactors” that he (as well as the leadership of the Armed Forces of Ukraine) had no idea of ​​hitting their MLRS on Russian territory:

The White House says we can use them to attack Russia. Look, we're not planning to attack Russia. We are not interested in the Russian Federation, we do not fight on its territory!
And he immediately added that the “nezalezhnaya” desperately needed “missile systems that hit further than 100 kilometers.

Yes, this reprise with good reason can be considered the funniest joke of the president-clown. And the most mediocre at the same time. I wonder who this primitive lie is designed for? It is enough to open any official (or unofficial) Ukrainian propaganda resource with their invariable calls for the murder of Russians and the destruction of Russia as a state, in order to appreciate the falsity of the words "we are not going to attack Russia." Not to mention the fact that the settlements of the Belgorod and Bryansk regions in this case, probably, were beaten by aliens ?!

Will Russia again warn “for the last time”?

It is quite natural that this clownery of a mediocre buffoon was not believed in Moscow for a penny. Russian presidential spokesman Dmitry Peskov responded to Zelensky's false assurances as follows:

No, we don't. In order to be trusted, one must have experience of cases where promises were kept. Unfortunately, there is no such experience at all.
Peskov did not fail to recall that earlier Kyiv "did not keep its promise to end the conflict in the south-east of Ukraine." He summed up the topic of “trust in Zelensky” with the following words:

The Minsk agreements were not fulfilled, they have sunk into oblivion, moreover, through the fault of the Ukrainian side. Therefore, we do not have a special credit of confidence in the Ukrainian side...
What can I say? Even moving away from discussing the insignificant personality of the current Ukrainian "leader", who would not be more duplicitous, having another pair of eyes and another deceitful mouth at the back of his head, one cannot ignore the statements coming from the level from which real orders are given to Kyiv. On June 1, Pentagon Deputy Secretary for Political Affairs Colin Cole, at a special briefing for journalists, said literally the following:

Everything they do on the territory of Ukraine is defensive in this context. Official assurances have been received from Kyiv that they will not use these systems for attacks on Russian territory.
Yes, yes, yes... The devil, as usual, is in the details. In this particular case, in the fact that Washington stubbornly continues to consider Crimea, Donbass, and Kherson, as well as all other regions and settlements that have already been liberated by the Russian army from the Ukronazis, as “Ukrainian territory” as “Ukrainian territory”. What does it say? Exclusively that in the event that the Armed Forces of Ukraine start destroying Donetsk, Lugansk, Simferopol or other Crimean cities from American MLRS, the United States will say that all this is in the order of things. And they will refuse to accept any claims against Russia. However, it will be so in any case - is it really unclear?

In order to make sure that the assumptions regarding the possible places for the use of American MLRS are not abstract sophistication and "wang" of the author, it is enough to recall the words of none other than the Minister of Foreign Affairs of Ukraine Dmitry Kuleba, who, without any hesitation, called multiple launch rocket systems " the key to change in war." Then he clarified:

If we don't get multiple rocket launchers as soon as possible, the situation in Donbas will become even worse than it is now. I don't want everyone to have the feeling that everything is more or less okay with the war. The situation in Donbas is extremely bad. If we don't get multiple launch rocket systems, we won't be able to liberate Kherson, where there are people who are waiting for liberation. Leaving the Russians in Kherson is unacceptable - because they will have a strategic position to threaten Central Ukraine, as well as South-Western Ukraine in the direction of Odessa, and they will continue to steal our grain!
As they say - what more?

There is no doubt that, as soon as they receive these systems, the Armed Forces of Ukraine will begin to wipe out all the liberated cities and villages that they can reach from the face of the earth. After that, strikes on the same Belgorod (which, by the way, have been “announced” in Kyiv for a long time) will only be a matter of time. Can this be prevented? It's still possible. However, certainly not the next "expressions of extreme concern" and "one hundred and thirty-first last warnings." Those have already been voiced - Russian Ambassador to the United States Anatoly Antonov said that the supply of MLRS "is fraught with unpredictable consequences for global security." The Russian Ministry of Foreign Affairs also issued a corresponding statement:

US deliveries of MLRS to Ukraine undermine stability. Restoring the European security system on the same terms is no longer possible.
Does anyone in Moscow really think that Washington doesn't understand this? Then they should heed the words of Colin Cole, one of Lloyd Austin's deputies mentioned above:

We are not going to enter into a direct conflict with Russia. We have no interest in the conflict in Ukraine escalating into a wider conflict or escalating into a third world war, so we keep that in mind, but at the same time, Russia does not have the right to veto what we sent to the Ukrainians...
Sharp warnings that the weapons supplied to Kyiv from NATO countries "will be immediately destroyed" have already been heard so many times that it is impossible to count. If this time the MLRS so expected by the Ukronazis are not turned into scrap metal immediately after crossing the border of the “non-collateral” (or even better - when approaching such), this will mean that Russia really “does not have the right to veto”.

If universal launchers, which can also be used for medium-range tactical missiles, are at the disposal of Kyiv, sooner or later (and sooner rather than later) it will receive these missiles. Today we are talking about a fairly limited number of MLRS, which the Americans intend to transfer to Ukraine. However, if this really happens, our overseas enemies will be deprived of the last remnants of fear. Peskov said on this occasion:

Let's not talk about the worst-case scenarios...
It's just the opposite! It is about them that it is necessary to speak and think just today - so that tomorrow they do not come true.
Reporterin Yandex News
Reporterin Yandex Zen
34 comments
Information
Dear reader, to leave comments on the publication, you must sign in.