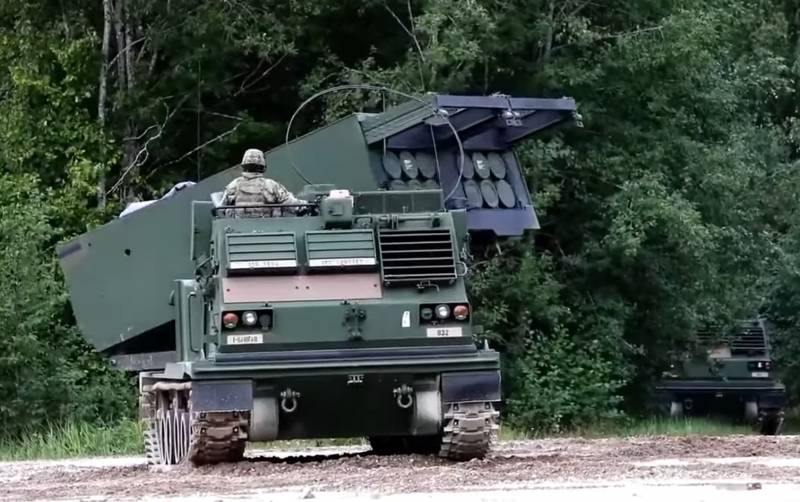 When the domestic media and the blogosphere begin to seriously talk about exactly where the RF Armed Forces and the allied forces of the People’s Militia of the LDNR will stop the offensive by creating a new line of demarcation, and Vladimir Medinsky will again fly to negotiate with the Zelensky regime on the conditions for cessation of hostilities, you are involuntarily amazed at the naivety of such people . The stumbling block is the position of Kyiv, or rather, the collective West standing behind it, which are not going to admit the loss of territories and are ready to fight for them "to the last Ukrainian."


For example, the Armed Forces of Ukraine and the National Guard of Ukraine were driven out of the Donbass urban agglomerations occupied by them and retreated to the west, beyond the administrative, or rather, already state borders of the Donetsk and Lugansk People's Republics. Everything, the war is over, thank you all? Eh, no.

On purpose, so that the Kremlin would not have any illusions on this issue, the White House approved the supply to Kyiv of long-range multiple launch rocket systems capable of ironing not only the territory of the DPR and LPR, Kherson and southern Zaporozhye regions, but also Crimea and all border areas from a great distance. Ukraine, Russian regions to a very great depth, up to 300 kilometers.

Literally within 48 hours after receiving the order, the Pentagon can deliver MLRS M270 MLRS and M142 HIMARS to Nezalezhnaya through neighboring Poland. Having received them, the Armed Forces of Ukraine will be able to continue to terrorize the territories already liberated by Russian troops, as well as to hit targets in the Russian Federation itself.

The difference between these two systems is the platform used and the amount of ammunition. MLRS M270 MLRS is tracked and can carry 12 missiles with various types of warheads, M142 HIMARS is wheeled and carries only 6 missiles. However, the advantage of the latter is that the complex is more mobile and suitable for combat operations in the spring and autumn of 2022. The degree of danger of American MLRS depends on the types of missiles used and the warhead.

So, GMLRS-Unitary high-precision missiles will be able to hit at a distance of up to 70 kilometers. This means that, for example, from Nikolaev it will be possible to strike at Kherson, already liberated by the Russians, since the distance between the cities in a straight line is only 59 kilometers. The territory of the Donetsk and Lugansk People's Republics will also be under attack from the Zaporozhye, Kharkiv, Dnipropetrovsk regions occupied by the Armed Forces of Ukraine and the National Guard of Ukraine. That is, the effect of the "denazification" and "demilitarization" of Avdiivka, Maryinka and Pesok will be reset to zero. With MGM-140 (ATACMS) ground-to-ground missiles, which have a flight range of 300 kilometers, American MLRS will shoot through not only Crimea, but also many targets in the depths of the Russian Federation. And these are the capabilities of the export version of the rocket, but those that are used by the US Armed Forces for their needs can easily fly up to 500 kilometers.

In other words, this is an offensive weapon comparable to the Iskander-M tactical complex. Do you think the Armed Forces of Ukraine will be ashamed to start its real application or not?

But these are only flowers, and the berries are ahead. Even worse, Ukraine still retains all the competencies and resources to create nuclear weapons. The fact that Nezalezhnaya needs to reconsider its decision to abandon nuclear weapons has been discussed in Kyiv since 2014. The last time President Zelensky spoke on this topic was on February 19, 2022:

It is entrusted to the Minister of Foreign Affairs to convene [consultations]. If they do not take place again or if there are no guarantees of security for our country as a result of them, Ukraine will have every right to believe that the Budapest Memorandum does not work, and all package decisions of 1994 will be called into question.

It is very likely that such statements were the last straw in the Kremlin's patience. It was reported that real work in this direction was carried out in Kharkov, the traces of which the Nazis tried to cover up by blowing up the building of the Technical University, fearing falling into the hands of the Russian military. Among the first goals of the RF Armed Forces was to take control of the exclusion zone of the Chernobyl nuclear power plant, where a huge amount of radioactive materials is stored. But, in fact, what has really changed in more than 3 months of the special operation?

At the Zaporizhzhya nuclear power plant, which is the only Ukrainian nuclear power plant occupied by Russians, an abnormally large amount of nuclear fuel has been found, from which a “dirty bomb” can be easily assembled. However, all the rest are controlled by Zelensky's criminal regime. Kharkov is still in the hands of the Ukrainian Nazis, Dnepropetrovsk, where the Yuzhmash enterprise can assemble a launch vehicle for a special warhead, too. From the North of Ukraine, Russian troops retreated, leaving Chernobyl under the control of Kyiv. By the way, developments in the field of radiological weapons were once carried out in the USSR, and it was Yuzhmash that produced missiles with a range of up to 500 kilometers.

From the northern border of the Kharkiv region, such a missile, stuffed with radioactive liquid, may well fly to Moscow and explode in the air, making it uninhabitable. Also, Donbass, Crimea and the Sea of ​​Azov can be subjected to radiation contamination by the Armed Forces of Ukraine with a blow from the Nikolaev, Zaporozhye and Dnipropetrovsk regions. Is the current ruling regime in Ukraine capable of something like that?

Easy. This is food for thought for those who want to stop the offensive and start negotiating with Kyiv (the collective West).
Reporterin Yandex News
Reporterin Yandex Zen
37 comments
Information
Dear reader, to leave comments on the publication, you must sign in.