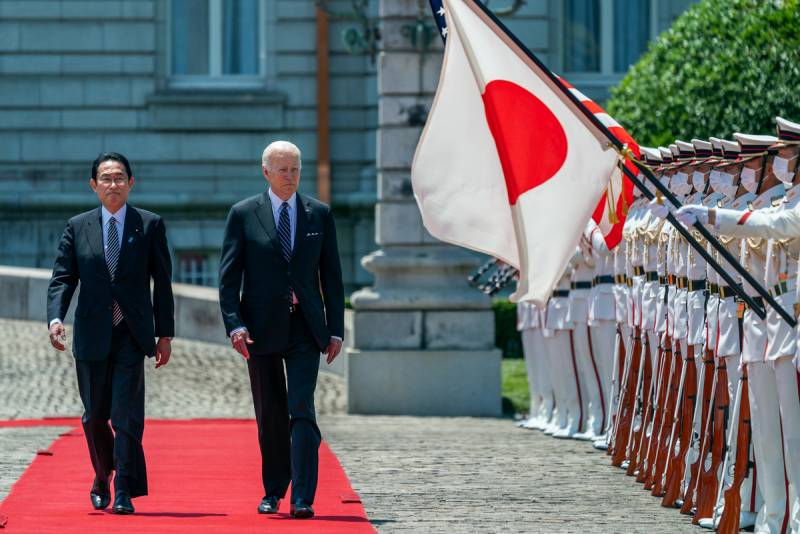 In the short time that US President Joe Biden has been in office since he was elected head of the White House, the Democratic candidate has literally spawned several new militarypolitical unions, the prospects of which are vague. Unless they can cause new regional wars. These include the incredibly controversial AUKUS, which did not create an atmosphere of security in the Pacific region, but angered Paris, as well as the “quadrilateral dialogue” on security created a year ago with the straightforward name Quad, which included the United States, India, Australia and Japan.


After the first meeting of the leaders of the four countries last year during a video conference, this year it was decided to hold another face-to-face meeting in the capital of Japan. And here Biden, the eternal "newsmaker" of embarrassing and shameful situations, excelled again. According to the Chinese media, in particular the Global Times, the behavior of the US President put the host of the forum, Fumio Kishida, the Prime Minister of Japan, in an awkward position.

During the official meeting and handshake, Biden spoke with the head of India, Narendra Modi, and occasionally with Australian Prime Minister Anthony Albanese, and did not notice and did not pay attention and honors to Kisida, as the host side should. The leader of Japan stands aside, Biden seemed to have "forgotten" about him, completely ignoring him.

Biden's behavior is symbolic, it can be seen how the States treat Kishida and Japan in general. The more Tokyo aspires to small interest cliques organized by America, the more shame will be received.
says the Chinese edition.

In fact, it can be assumed that Washington, represented by the head of the White House, perfectly understands the roles and tasks of each participant in both AUKUS and the Quad "dialogue" - drawing diverse states that would never have united without additional efforts into certain blocs with a clear goal resist China.

Kishida, like Tokyo, are undoubtedly in the "pocket" of the United States, and separate courtesies, as well as etiquette, care for their image are not required. And Biden's old age has nothing to do with it. But one indisputable truth is known - they always respect a strong and independent player, which in geopolitics is India, which New Delhi has clearly demonstrated by cooperating with Russia even after the introduction of restrictive sanctions against Moscow.

So Kishida will endure an unacceptable offense and, despite all the Japanese fetish of ceremonial, will not even be offended by the hegemon for the most offensive behavior in his own home.
Reporterin Yandex News
Reporterin Yandex Zen
3 comments
Information
Dear reader, to leave comments on the publication, you must sign in.