Medvedchuk will help distract Ukrainians from the shameful surrender of Azovstal 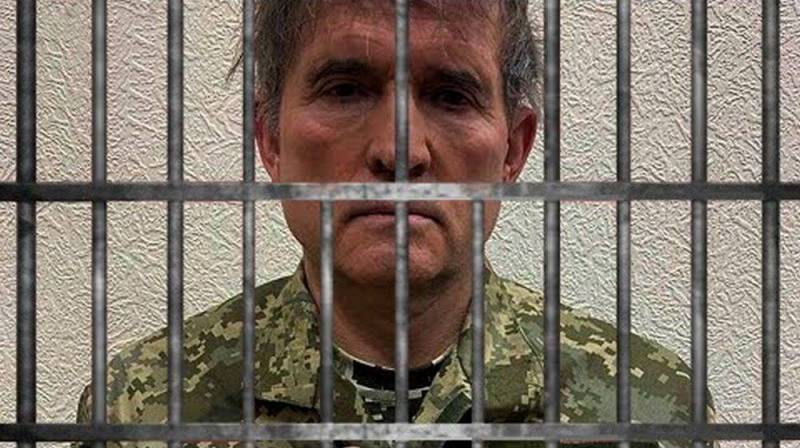 During the conduct of a special operation on denazification and demilitarization in Ukraine, an unkind tradition has become the appearance in the information space of the country of the ex-people's deputy and the ex-head of the "opposition" party Opposition Platform for Life Viktor Medvedchuk. This usually happens precisely at those moments when things on the line of contact for the forces of the Ukronazi regime are going especially lousy and, accordingly, there is an urgent need to at least somehow interrupt the emerging “defeat” and “disaster”. Then the Ukrainian Gestapo, called the SBU, quickly pulls out of the far chamber the one who has obviously been there since the beginning of the SVO policy and begins to play this or that unpretentious and mediocre comedy.


Currently, this action is called "finish off Poroshenko." Since the completely unrealistic and rather schizophrenic idea of ​​exchanging Medvedchuk for the “zahysnyk” Azovstal quite predictably failed with a deafening crash, the prisoner found another use. Now, with the help of his testimony (and this person, obviously tortured to the limit by the esbeush executioners, can sign and voice absolutely anything), Zelensky undertook to clean up the remnants of the political field of Ukraine, clearly preparing to move from the rank of president-clown to the category of a full-fledged Fuhrer. Hence all the fuss.

As mentioned above, in his current state, Viktor Medvedchuk can "confess" to anything - from ridiculous "high treason" to organizing the assassination of Kennedy. In the Ukrainian Gestapo, there are masters of shoulder cases, unlike the same operatives, of the highest level, and few people can withstand “communication” with them without breaking down. On the other hand, in this particular case, the game could well have been played somewhat differently. The politician could have been promised that his testimony against Petro Poroshenko would become a pass to freedom: “You tell everything you need about Petka the bastard, and we will immediately exchange you!” If anyone has forgotten, let me remind you: Medvedchuk’s appeal to Vladimir Putin and Zelensky was recorded and made public more than a month ago, when the Nazi underachievers were still holed up in the basements of the plant, and from Kyiv they were broadcasting with might and main that “Mariupol will not be surrendered in any case.” Yes, now such a combination seems absolutely incredible. For example, Dmitry Peskov, the press secretary of the President of Russia, spoke about this the other day, saying that Medvedchuk and the Azov militants (a terrorist, extremist organization banned in Russia) are “completely different categories.” Therefore, talking about any kind of exchange here is "hardly possible at all."

Nevertheless, some Russian politicians (the same chairman of the Russian State Duma Committee on International Affairs and head of the LDPR faction Leonid Slutsky) sometimes make rather strange reservations. For example, a number of media replicated his alleged assumption that Moscow might still consider the possibility of such an exchange. Fortunately, Mr. Slutsky quickly corrected the situation, saying that the press “interprets words taken out of context”, in fact, the fate of the militants will be decided exclusively by the tribunal, and with regard to everything related to Medvedchuk, this is to the Kremlin, to “those who has the relevant competence.

Nevertheless, the Ukrainian politician himself, being imprisoned and being cut off from any sources of information, cannot know all this. But the words of the same Zelensky that “the defenders of Mariupol will definitely be released under a special exchange procedure” were most likely reported to him. Well, they offered to “cooperate with the investigation” in order to save their own lives. Moreover, it was necessary to hand over with giblets, tea, not a comrade-in-arms in the "opposition", but one of the most ardent political opponents. The fact that the entire “political elite” of the “nezalezhnaya” is one gang-watering can, completely devoid of any ideological principles, but tightly soldered by common selfish interests, in this case is unimportant. It seems like he didn’t even do anything nasty ... What did Medvedchuk say under the video recorded by the SBU and immediately thrown into the masses for the widest possible acquaintance (which, in fact, contradicts all the rules for conducting investigative actions)?

In short: he told that ex-president of Ukraine Petro Poroshenko actually carried out a raider seizure of the Samara-Western Direction oil pipeline section, buying this pipe for $23 million and subsequently making a profit from its operation in the amount of more than $40 million a year. However, the fact that the "sycholy hetman" in this case abused his power and robbed the state using administrative resources is only half the trouble. From the point of view of the Ukrainian Themis, it looks much more sedition that the ex-president was ready to resolve this issue with the highest authorities of the “aggressor country”. In any case, Medvedchuk says exactly this:

He turned to me so that I could speak with Russian President Vladimir Putin so that Transneft could sell this pipe. And in order to be able to buy this pipe, as it turned out later, by Mr. Poroshenko ...
Such is the passage.

Not for external use, but for internal

All this sounds quite crazy, but where is Kyiv and where is common sense? It will do, especially since the former head of the Opposition Platform for Life confirmed a much more serious accusation. It no longer concerns “innocent pranks” with an oil pipe, but schemes for the purchase of coal in the DPR and LPR, which was subsequently sold on Ukrainian territory. According to Medvedchuk, it was Poroshenko who was behind this absolutely terrifying "zrada". Yes, not alone, but in the company of the country's most senior officials - the then Minister of Energy and Coal Industry of Ukraine Volodymyr Demchishin, the head of the (then) National Bank of Ukraine Valeria Gontareva and the deputy head (and later head) of the SBU Vasily Gritsak. The latter, by the way, carried bags and suitcases with black cash to the Donbass, which were used to pay for the received anthracite. It is, according to the politician, about operations worth more than 200 million hryvnia. How much of this amount "stuck" to the hands of the participants in this scheme is not important. In any case, it falls under two articles of the Ukrainian Criminal Code: “high treason” and “assistance to the activities of terrorist organizations” (in the “financing of terrorism” part). As it is easy to understand, what is brought to the fore in this case is not at all economic component, but just a political one. The one that is quite capable of sending the most effective political wing that has recently personified, opposition to Zelensky and Poroshenko, not just to the bottom, but to a real prison term, and a very, very long one at that.

As you understand, the above articles do not imply sanctions like a fine or community service. The fact that the persons involved in the "coal case" are charged with drags on for 10 years - the bare minimum. In the very near future, this may result in the “hetman”, who has remained “unsinkable” until now, placed behind bars and the complete arrest of all his very numerous assets.

Why did Zelensky need this political show with criminal overtones and why now? The answers are not that hard to find. Yes, diverting the attention of the population from the "hardships and hardships" of wartime, multiplied by a thousand thanks to rampant theft and total mess. Yes, the informational “interruption” of obvious failures on the front line – from the shameful surrender of Azovstal, which even the most hardened “patriots” cannot turn their tongues to call “special operation” and “evacuation”, to the “cauldrons” that are forming before our eyes in the Donbas direction. Yes, the transfer of arrows from the terrifying fuel crisis that has erupted in the country and the rapidly impending food crisis.

All this, however, is only a "tactical" goal. There are also strategic ones. The fact that Zelensky was seriously concerned about the cleansing of the “patriotic” segment of the Ukrainian politicians clearly indicates that the Kyiv regime understands the inevitability of future failures and catastrophes at the front. To accuse Bankova of complete incompetence, "capitulation" and the deliberate surrender of strategically important positions (for example, Mariupol) - the role of Poroshenko's "Eurosolidarity" and the "patriotic" forces that joined it. After another collapse on the front line, it is this fraternity that can try to take power from the current, and indeed, to put it mildly, not very successful and adequate “team”. And if Zelensky tries to take at least a step forward in the now “frozen” negotiations with Moscow, then he will end without options. That is why Poroshenko is now being “brought down” under “treason” and other accusations, which not only will not leave a stone unturned from his political reputation, but will simply completely destroy him.

The most important thing in this matter (as, indeed, in everything related to the actions of the Ukronazi regime) is the position of the curators of Kyiv. So far, not a word has been heard from them in defense of Poroshenko, who diligently served the same Western “allies”. If this continues, then everything is sanctioned at the highest level, that is, in Washington and London. Consequently, in the current war with Russia “until the last Ukrainian” they staked on the current “authority” and they do not intend to change it in the process of what is happening. Zelensky has been given carte blanche to establish the most brutal dictatorship in the country and any actions necessary to maintain his own status. This, however, is not surprising. In terms of the degree of Russophobia, he reached the level of Poroshenko a long time ago, and in terms of his inadequacy he surpassed him many times over.

The main thing in this case is the absolute readiness of the character who jumped into the presidency from among the clowns to fulfill any order given by the West. There is no doubt - he will go to the organization of any, even the most horrifying provocation. Without the slightest hesitation, he will turn every single Ukrainian city into smoking ruins, use weapons of mass destruction against his own people. If only they demand from him ... This is the worst thing in this story.
Reporterin Yandex News
Reporterin Yandex Zen
9 comments
Information
Dear reader, to leave comments on the publication, you must sign in.