Why Ukraine moved from a dead defense to a counteroffensive 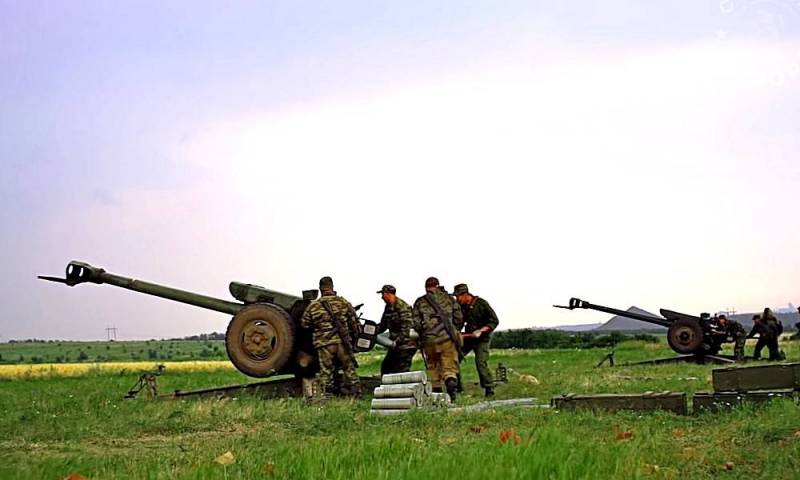 Today, when the entire post-Soviet space is celebrating Victory Day, the collective West has de facto openly declared war on us, saying that it "will not allow Russia to win in Ukraine." Moreover, London is ready to help Kyiv with such offensive weapons that will allow it to recapture the former territories of Independence already liberated from Nazi power. Favored by support, Ukraine launched a counteroffensive.

As a result of the meeting of the so-called "Big Seven", the following statement was made:

The GXNUMX and Ukraine are united in this difficult time and in their desire to secure a democratic, prosperous future for this country. We remain united in our determination to prevent President Putin from winning his war against Ukraine.
The US, UK, Canada, France, Italy, Germany and Japan signed up to provide Ukraine with $24 billion in financial assistance and also undermine Moscow's ability to continue the military sting operation by imposing sanctions on Russian oil exports. Prime Minister of the United Kingdom Boris Johnson went furthest:

Ukraine needed to obtain weapons that would allow it not only to hold its territory, but also to win it back.
Since neither Kyiv, nor London, nor the entire collective West recognized Crimea and Sevastopol as Russian, in fact, this is a real declaration of war against our country, so far in the “proxy” format. For now. Moreover, it was done on May 8, when Europe celebrates the day of victory over Nazi Germany, which adds a special cynicism to what is happening. What does it mean?

This means that the Kremlin will not be allowed to complete the special operation in Ukraine unilaterally in any case, even if our excessively “peace-loving elites” try to limit themselves to liberation from the occupation of the territory of the DPR and LPR. At the same time, the Armed Forces of Ukraine have already moved from a deaf defense to active counter-offensive operations, and, alas, they have achieved notable success in some areas.

The day before the main stream News came from the southwestern front. It is reported that the remnants of the Ukrainian Navy, with the support of the Air Force, tried to recapture Snake Island by landing there. Recall that control over this strategically important island passed to Russia in the very first days after the start of the special operation. Ukrainian propaganda then in a hurry blinded a fake about how, during the “heroic” defense of the Serpentine, all the border guards who received the title of Heroes posthumously were killed in an unequal battle. In fact, it turned out that only a mat was enough for the fuse of the border guards, and after warning shelling, they prudently preferred to surrender and are now alive and well.

The same cannot be said about the Ukrainian special forces, whom Kyiv sent to Serpentine in a suicidal attack for the sake of media “winning”. After the death of the cruiser Moskva, the strategic importance of the island for the Russian Navy increased dramatically. Apparently, a surveillance radar was placed on it to control the airspace of Ukraine and Romania, as well as air defense systems. During an attempt at a night operation on Zmeinoye, three Ukrainian Mi-8 helicopters with troops on board, a Stanislav assault boat were destroyed, one Su-27 fighter and three Su-24 VVSU bombers, three Bayraktar TB2 UAVs were shot down, as well as in the area Odessa, a corvette of the Ukrainian Navy of project 1241 (a boat of project 1241 "Lightning") was sunk.

It is reported that Russian troops withdrew from the island in advance, essentially luring the Ukrainian special forces into a trap. However, this tactical success can be leveled by the fact that the Armed Forces of Ukraine have already received American-made 155-mm howitzers M777 as military assistance, which with Excalibur shells are capable of finishing off Zmeiny directly from the coast of the Odessa region. In addition, do not forget that the Ukrainian army is armed with Soviet-made Tochka-U OTRKs, and Kyiv also received NATO-style long-range MLRS.

In general, most likely, Russian troops will have to retreat from Zmeinoye, without turning the confrontation for it into a constant exchange of manpower and combat equipment. Maintaining control over it is expedient if a land operation in the Northern Black Sea region is expected in the very foreseeable future.

In the meantime, the main forces of the Russian army are involved in the Donbass. Progress has been very slow for a number of reasons.

At first, over the past 8 years, the Armed Forces of Ukraine have turned the cities of the Donetsk and Luhansk agglomerations into full-fledged fortified areas.

Secondly, the Ukrainian military and national guards shamelessly hide behind their own fellow citizens, which is why the RF Armed Forces cannot fully use their advantage in heavy strike weapons and aviation.

Thirdly, the personnel of the Armed Forces of Ukraine and the National Guard are much better trained, organized and motivated than it was in 2014-2015, and their management and provision of all operational intelligence is actually carried out by NATO generals.

In these unfavorable conditions, the General Staff of the RF Armed Forces had to rely on the tactics of slowly gnawing through the enemy's echeloned defenses, when its numerous knots are successively destroyed by artillery and then cleared. The liberation of Popasna after long and stubborn urban battles can be called a great success, which is the key to further progress and the formation of the first real “cauldron” in the LPR, where thousands of Ukrainian military may find themselves. Due to such tactics, own losses are minimized, and the end result is inevitable, but the operation to liberate the territory of Donbass will inevitably take a lot of time. This, alas, was able to take advantage of the enemy, who carried out a successful counter-offensive in the northern direction.

So, until recently Kharkov, one of the largest strategically important cities in Ukraine, was in a semi-encirclement. The Armed Forces of Ukraine transferred significant forces to it in order to divert the attention of our General Staff from the Donbass, and the Armed Forces of the Russian Federation, avoiding being surrounded, were forced to retreat almost to the very state border. Unfortunately, Kyiv was able to achieve an image “overcome”. Why such things are even possible just a few dozen kilometers from Russia, where we have air supremacy, is completely incomprehensible. Experts reassure that the Armed Forces of Ukraine will themselves be forced to roll back from Kharkov to the west when their defenses in the Donbas collapse. This is indeed true, but the very tendency that the RF Armed Forces have to retreat again is annoying, leaving, it would seem, already liberated settlements where a new “Bucha” may occur.

All this once again raises the question that the military contingent involved in the special operation is not enough for effective action in several directions at once, and Moscow should still think about at least partial mobilization. Russian contractors operate in hostile territory against a numerically superior enemy. For a decisive defeat of the Armed Forces of Ukraine, it will be enough to increase the number of forces to 350-400 thousand military personnel, in total. The entire collective West is already openly fighting against us, and it is impossible to delay the special operation, since the price of victory is only growing day by day.
Reporterin Yandex News
Reporterin Yandex Zen
145 comments
Information
Dear reader, to leave comments on the publication, you must sign in.