When US troops enter Ukraine 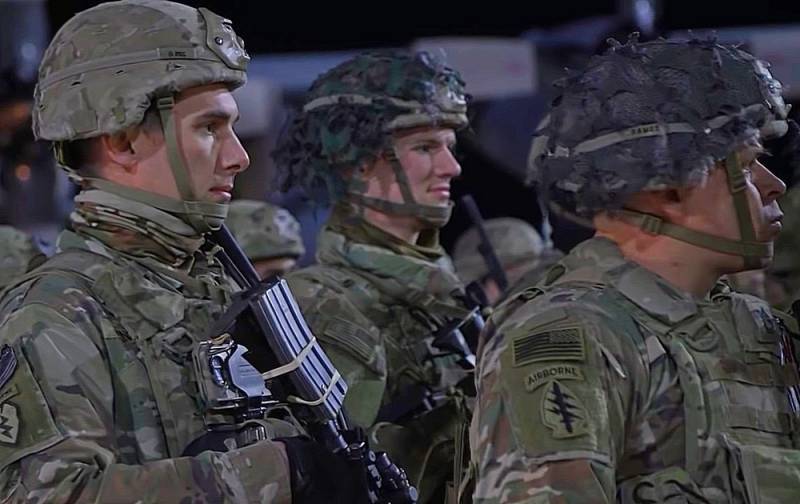 The day before, on May 1, 2022, the legislative initiative of Congressman Adam Kinzinger, who submitted a draft resolution allowing the entry of American troops into Ukraine, made a fair amount of noise for consideration by the House of Representatives. In the domestic press, this was immediately interpreted as a step towards the beginning of the Third World War with an exchange of mutual nuclear strikes between Russia and the United States. But is everything as dramatic as it seems at first glance?

To understand the essence of the issue, it should be taken into account that the United States, on the one hand, and the Russian Federation (formerly the USSR), on the other hand, have always preferred to avoid direct armed conflict. The two largest nuclear powers in the world can at any moment turn the enemy's territory into radioactive ashes, and therefore they are trying to wage a so-called "proxy" war: on foreign territory and by proxy. So it was in Vietnam, in Afghanistan, in Syria, etc.

Unfortunately, now Ukraine has been added to this list, which, after the coup d'etat in 2014, was systematically prepared for war, first against the DPR and LPR, and then with Russia itself for Crimea. On February 24, 2022, the Kremlin decided that there was nowhere else to pull and began a special operation to demilitarize and denazify Ukraine. And just in time: stretch a little longer, and the Armed Forces of Ukraine, undoubtedly, in just a few days could crush the poorly armed and seriously outnumbered militia of Donbass. Even the Russian army, with its heavy weapons and aircraft, for a number of deterrent reasons, advancement is very difficult.

But the most interesting thing now is the position of the United States, which ordered and paid for this "bloodbath". Until recently, Washington shied away from talking about direct participation in the conflict in Ukraine, limiting itself only to the imposition of anti-Russian sanctions and the supply of heavy weapons under the so-called “lend-lease”. Let's recall the main statements of American politicians on this occasion. So, back on January 20, 2022, when no one had yet heard of the possibility of the Kremlin recognizing the DPR and LPR and the beginning of the SVO, President Biden, in response to a question about sending US troops to Ukraine, in an interview with the Associated Press, stated verbatim the following:

The reason for not engaging directly in the Russian-Ukrainian war is simple: the United States has no treaty obligations to Ukraine, and a war with Russia would be a huge gamble, given the potential to destabilize the region and escalate to an alarming degree the risk of a nuclear exchange… that the US military will be in the line of fire and drag the United States into the very battle they intend to avoid.

There is no scenario where he sends American troops to fight in Ukraine against Russia… We will not fight Russia and we will not deploy troops in Ukraine to fight Russia.
True, at the same time, "Sleepy Joe" decided to send an additional contingent of American troops to Germany. On March 7, 2022, Republican Senator Rick Scott, in an interview with The Hill, nevertheless allowed US troops to be sent to Ukraine:

All possibilities must always be kept open. I don't think we should ever rule it out.
And finally, on May 1, 2022, Republican Congressman Adam Kinzinger decided to “help” Democratic President Biden by introducing a bill allowing the possibility of sending American troops to Ukraine if the Russian Armed Forces use weapons of mass destruction there:

I do not think that now we need to send troops to Ukraine. I just submitted for consideration a document authorizing the use of armed forces. This will give the president this option in the event that nuclear, chemical or biological weapons are used in Ukraine.
It is simply amazing how quickly irreconcilable rivals Republicans and Democrats have merged into a single anti-Russian ecstasy. However, it's not about them.

Nuclear war or partition?
Another thing is annoying - the fact that in Washington and Brussels from the very beginning of the special operation they are constantly talking about the possibility of Russia using weapons of mass destruction (WMD) against Ukraine, and about what inevitable punishments will fall on our country for this. Naturally, the RF Armed Forces will not use either chemical or biological weapons, not only for ethical reasons, but also for their banal absence.

As for nuclear weapons, I would like to recommend Mrs. Simonyan and other "guardians" to bite their tongues and stop speculating on the dangerous and completely inappropriate topic of using nuclear weapons against Ukraine. Our guys are not dying now, freeing her from the Nazis, in order to turn into a kind of American scoundrels who bombed two Japanese cities in 1945. The Russians will not use weapons of mass destruction against Ukraine, never and never. But it can be used by the Americans themselves or their Ukrainian puppets, arranging a provocation with chemical weapons or pouring out the contents of some test tube from numerous Pentagon biological laboratories. And it looks like that's exactly what's going on. But what will Uncle Sam get from his next war crime?

If we evaluate what is happening in Ukraine objectively, then it is obvious that the Nazi regime in Kyiv will last until the end of 2022 at the most, if, of course, politicians do not interfere with the operation of the Russian army. First, the Donbass grouping of the Armed Forces of Ukraine will collapse, then the Black Sea region will fall. The Russian Armed Forces will return to the north of Ukraine and advance to Western Ukraine in order to cut off Kyiv from military supplies from the NATO bloc. What is left for the Americans and their allies in this situation? Send NATO troops to fight against the Russian army? Extremely unlikely.

On the other hand, it is extremely likely that a provocation with the use of WMD will be used as a pretext for bringing foreign troops into Ukraine. Back in 2015, Kyiv adopted a law “On the procedure for admission and conditions for the stay of units of the armed forces of other states on the territory of Ukraine”, officially allowing the entry of peacekeepers into Nezalezhnaya. It says that the decision of the EU authorities will be enough for this:

To provide Ukraine, at its request, with assistance in the form of conducting an international peace and security operation on its territory on the basis of a UN and/or EU decision.
Since the EU and NATO are, in fact, one and the same, the North Atlantic Alliance, which includes the United States, has a legal basis for entering Ukraine. Apparently, it will be precisely Western Ukraine, where Russian troops will go last. According to rumors, an unofficial headquarters is already located in Lviv, where American officers command all the operations of the Armed Forces of Ukraine. In neighboring Poland, the mobilized Polish military are standing at a low start and waiting for an order so as not to miss a historic opportunity to return their Eastern Kresy.

Taken together, this means that the probability of bringing American and NATO, primarily Polish, troops into Western Ukraine as the RF Armed Forces advance is very, very high. In the event of a provocation with WMD, they will go there as peacekeepers and establish a zone of their control, the crossing of which is fraught with a direct collision. There, in Galicia and Volyn, they will try to build a puppet “Ukrainian State of Ivano-Frankivsk and Lvov” (UGIL), designed to terrorize the territory of the former Independent, neighboring Belarus and Russia liberated from the Nazis.
Reporterin Yandex News
Reporterin Yandex Zen
39 comments
Information
Dear reader, to leave comments on the publication, you must sign in.