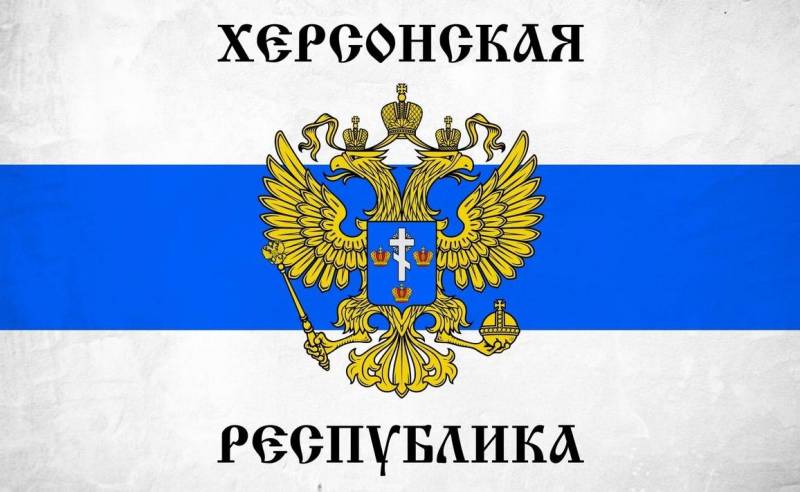 For more than two months of a military special operation in Ukraine, President Putin has not bothered to tell what kind of fate awaits the former Nezalezhnaya after the completion of its demilitarization and denazification. Moreover, the very course of the SVO casts doubt on the possibility of fulfilling the assigned tasks without occupying the entire territory of Ukraine, which the Kremlin has been diligently denying from its very beginning. However, in recent days there have been several events that give a timid hope that the common sense of those in power will still exceed the desire to appear "white and fluffy."

Life in the gray zone

The first thing I would like to draw attention to is the statement of the deputy head of the military-civilian administration of the region, Kirill Stremousov, who ruled out the return of the Kherson region to Ukraine:

It's impossible. Kherson region will develop economically. Kyiv will no longer be able to impose its ugly Nazi policiesaimed at the destruction of people and their identity.
The pro-Russian functionary also announced the transition of the region to settlements in rubles from May 1, 2022 and guaranteed the continuation of water supplies to Crimea through the North Crimean Canal. In response, Kyiv fired at the center of Kherson with a ballistic missile from the Tochka-U OTRK.

Well, what is happening is quite natural. Kherson region and the south of Zaporozhye, where Russian troops entered at the very beginning of the special operation, were more fortunate than other Ukrainian regions. There are no large-scale hostilities, as near Kyiv or in the Donbass. At the same time, giving the Kherson region and the south of the Zaporozhye region back to Kyiv as part of another “broad de-escalation gesture” is simply unthinkable, because then Crimea will lose guaranteed water supplies from the Dnieper and a reliable land corridor to the peninsula. However, the Sea of ​​\uXNUMXb\uXNUMXbAzov turned out to be actually cut off from the socialeconomic system of the former Square, and there it is necessary to somehow establish a peaceful life. Historically, it is tied to the Crimea, where, until 2014, agricultural products from the Kherson region were traditionally supplied. The beginning of the official circulation of the Russian ruble in the current situation becomes uncontested.

Objectively, the Azov region repeats the path of separation from Nazi Ukraine, which was already passed by the DPR and LPR, which received recognition of independence from Moscow on February 21, 2022. By analogy, a referendum on the creation of the Kherson and Zaporozhye People's Republics suggests itself, but Mr. Stremousov ruled out this scenario:

No referenda are planned. Ukrainian propagandists are spreading fake stories about the creation of the Kherson People's Republic in order to intimidate the local population. The Kherson region will develop and turn into a flourishing land, in which there will be no place for the ideology of Ukrainian Nazism.

That is, the Azov region is currently in a kind of “gray zone”, de jure remaining part of Ukraine, and de facto becoming part of a single socio-economic complex with the Russian Crimea. Is it good? No, there is nothing good in this. Why is this happening? Perhaps because the Kremlin still hopes to agree on something with Kyiv, and President Zelensky has bluntly stated that in the event of some referenda, he will officially withdraw from any negotiations:

If a referendum is proclaimed, a pseudo-referendum on all sorts of new republics, Ukraine will withdraw from any negotiation processes.
It must be assumed that referendums on the creation of some new republics on the territory of the former Independent should not be expected in the near future. "Collective Medinsky" will try to negotiate with the Ukrainian Nazis and their Western masters to the limit.

With all the personal rejection of the frankly destructive activities of this liberal tower of the Kremlin, I would like to note at the same time the important signal that the day before followed from the conditional "power bloc". So, Secretary of the Security Council of the Russian Federation Nikolai Patrushev stated verbatim the following:

The result of the current policy of the West and the Kyiv regime under its control can only be the disintegration of Ukraine into several states.
Now that's interesting. A few is a little more than two. And what kind of states could they be?

Modern Ukraine is very clearly divided into three parts - Western, Central and South-Eastern. Zapadentsy generally do not consider themselves one people with the rest of their fellow citizens. The southeast, or Novorossiya, is populated predominantly by ethnic Russians and Russian-speaking Ukrainians, and even today there remains a certain level of support for Russia, although since 2014 and especially after February 24, 2022, the mood has changed a lot. The real Ukraine is Central, it is Little Russia. The probability of dividing the territory of the former Independence today is greater than ever before.

The fact that neighboring Poland is ready to carry out the "Anschluss" of Galicia and Volhynia under the guise of a peacekeeping operation is no longer said by journalists and popular bloggers, but quite officially by Russian intelligence. The Polish Army is mobilized and drawn to the eastern border. It is curious what President Zelensky will say when Polish peacekeepers enter Western Ukraine and preparations for a plebiscite begin there?

If we look at the future of the former Nezalezhnaya from the point of view of its possible disintegration into three large parts (with the division of the Western one between its Eastern European neighbors), then the question arises whether it is necessary to fence the garden at all, creating more and more new people's republics - Kherson, Zaporozhye, Kharkov, Dnepropetrovsk , Nikolaev, Odessa and others? What is the real meaning in them and will there be more harm than good? In this troubled time, local authorities may be at the helm of equally “muddy” characters, around whom their own gang of “old-mode” elements will eventually form. All these people's republics will then quickly quarrel among themselves. Why do we, the Russians, need all this? To satisfy someone's ambitions there?

If we evaluate the situation sensibly, then on the territory of the former Nezalezhnaya there are already two states officially recognized by Moscow - the DPR and the LPR. Over the past 8 years, at the very least, their own legislative and legal base has been formed in them, the socio-economic system is really connected and gradually integrated into the Russian one. At the same time, the Donetsk People's Republic was proclaimed back in 2015 as the legal successor of the Donetsk-Krivoy Rog Republic (DKR), which occupied almost the entire territory of historical Novorossia. So why now fuss with a referendum on the creation of KhNR, if you can do it much easier?

For example, the DNR and LNR can officially unite into the Federal Republic of Novorossiya, which recognizes itself as the legal successor of the DKR with its capital in Donetsk. And after that, all the liberated territories simply officially join the federation on the basis of the rights of its regions, extending their legal regime to them and at the same time integrating them into the socio-economic system. This will instantly solve a lot of organizational and legal issues, bringing, in particular, the Sea of ​​\uXNUMXb\uXNUMXbAzov from the notorious "gray zone". In the future, if the Kremlin still decides, and the Nazi regime in Kyiv falls, Novorossiya could join the Russian Federation through a referendum on the rights of the entire Novorossiysk Federal District. This would eliminate the very possibility of a neo-Nazi revenge in the future.

The issue with Central Ukraine could be resolved in a similar way. After the defeat of the Armed Forces of Ukraine in the Donbass, Russian troops will have to return to the north of the Kyiv, Chernihiv and Sumy regions in any case in order to create a “security belt” along their border. On the territory of the Kyiv region, when the Kremlin finally understands that it will definitely not work out with Kyiv, it will be possible to proclaim the creation of the Federative State of Little Russia, which will become the successor of the former Independent. Liberated from the power of the Ukrainian Nazis, Little Russia will be able to join the CSTO, the EAEU and the Union State of the Russian Federation and the Republic of Belarus.
Reporterin Yandex News
Reporterin Yandex Zen
65 comments
Information
Dear reader, to leave comments on the publication, you must sign in.