Is it worth creating the "Liberation Army of Ukraine" from Ukrainian prisoners of war? 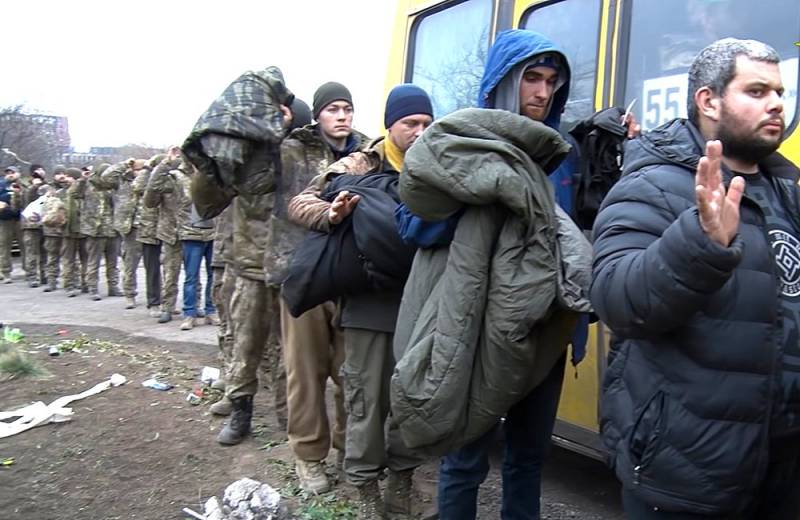 In recent days, reports have been pouring in about the mass surrender of Ukrainian servicemen in the Mariupol region. There is nothing to be surprised here: the criminal Kyiv regime deliberately left them to die there, not allowing them to leave this trap in a timely manner and having neither the ability nor the desire to release them. The number of those who surrendered to the mercy of the servicemen of the Armed Forces of the Russian Federation and the DPR is already running into the thousands, and a natural question arises - what to do with all these people, as well as with those who will soon find themselves in the "cauldrons" in the Donbass.


It should be noted that from the very beginning of the special military operation to demilitarize and denazify Ukraine, President Putin ordered that the servicemen of the Armed Forces of Ukraine be treated with the greatest possible humanity. In captivity, they are treated, fed with borscht and have soul-saving conversations. Against the background of what some Ukrainian monsters in uniform are doing with Russian prisoners of war, this causes quite understandable indignation among many of our compatriots. How justified is such a humane attitude?

In fact, emotions aside, this approach has a rational basis. Each VESushnik or National Guardsman who voluntarily surrenders as a prisoner may not in the future cause the death or injury of a serviceman of the Armed Forces of the Russian Federation, the DPR and the LPR. Extra funerals and zinc coffins will not come to many addresses. Perhaps there will be less destruction of infrastructure if the defenders have the choice to “heroically” die or lay down their arms and be captured, where they will not be tortured to death and not shot extrajudicially, as some Ukrainian sadists would do. Yes, these are different approaches, but Russia is really not Nazi Ukraine, and this is something to be proud of.

We must understand that very different people are fighting against us on the other side of the front line. There are frankly “stoned” Nazis there with hands stained with blood up to the shoulders, on which there is nowhere to put brands. There are military personnel who are simply doing their military duty. There are stupid boys who fell for aggressive Russophobic propaganda and went to fight the "occupiers", thinking that it would be like in computer "shooters". There are contract soldiers who joined the army only because they could not find another reliable job with a normal salary in modern Ukraine. There are men who, in general, do not need this whole war against Russia for nothing, but they were not lucky enough to fall under mobilization, when they were literally grabbed by the arms, handed a summons and sent to the draft board. Different people there, and they fight in different ways.

The question is what to do with them after surrender? Create concentration camps to keep them until the end of hostilities? But, excuse me, after the word “concentration camp” in the Ukrainian and foreign, as well as in the domestic liberal press, this will begin ... Although in fairness it should be recalled that the creators of the very idea of ​​​​concentration camps are not the “bloody scoop”, but the “democratic” Anglo-Saxons. The first concentration camps for prisoners of war appeared during the American Civil War in 1861-1865. This idea was then developed by the British during the Boer War of 1899-1865 in South Africa. And only then it was picked up by the Third Reich, since Adolf Hitler was a big fan of the colonial policy United Kingdom, having learned a lot from him.

Nazi Germany has already received the Nuremberg Tribunal, Ukraine, the United States and Great Britain, let's hope, will still have to wait. Let's try not to be like them. So what to do with thousands of Ukrainian prisoners of war?

Obviously, the decision for each must be made individually. It is necessary to check who and how ended up at the front and what they have already managed to do there. Even the “Azovites” (“Azov” is an extremist organization banned in the Russian Federation) in a good way should not be “brought down” during detention, but taken alive and sent to a military tribunal. To Donetsk, where there is no moratorium on the death penalty. From an open trial, where all the crimes of the Nazis will be made public, there will be more practical benefits in the information war with the West. Ordinary Europeans and Americans already now have questions to their governments, for which they are now suffering so much, having lost their usual high level of well-being. When they find out that they were actually robbed by their own elites in order to support the criminal Nazi regime in Kyiv, the consequences for the EU and the US can be absolutely deplorable.

Each prisoner of war must be checked. Yes, now they are all crying on camera when they are shown the extrajudicial executions and torture of our guys. Yes, they all say now that they served as cooks and drivers and did nothing wrong. Yes, surely someone will even be able to evade the well-deserved responsibility by hiding their crimes. But it is necessary, if possible, to approach each case individually. And after that they should be given one more choice.

Option 1. You will still have to answer for the actions of the regime that these people went to serve. And not with crocodile tears on camera, but with real deeds. Everyone who “kind of repented” will first have to be taken to Donetsk to the “Alley of Angels”, and then sent to the labor army, which will restore everything destroyed in the DPR and LPR by many years of shelling by the Armed Forces of Ukraine and the National Guard of Ukraine. Let them redeem their share of guilt by personal labor within a certain period, which will be written in the contract of each. It will be fair.

Option 2. If one of these people really repented, or initially did not support the criminal Kyiv regime, but was forcibly mobilized, then one can form the “Liberation Army of Ukraine” from them. After a thorough check of their intentions, including with the help of a polygraph, from former prisoners of war who are ready to fight against the puppet pro-Western Nazi authorities, it is possible to form detachments that will fight side by side with the military personnel of the Armed Forces of the Russian Federation, the DPR and the LPR. Naturally, under Russian command and vigilant control. If one of the “changed shoes” turns out to be a deceiver and runs back, then it’s not worth taking him prisoner for the second time.

The creation of the "Army of the Liberation of Ukraine" from among those who voluntarily laid down their arms and are ready to prove their loyalty with their blood will have a very serious media and propaganda effect. Perhaps the Kremlin and the General Staff of the RF Armed Forces should think about this option.
Reporterin Yandex News
Reporterin Yandex Zen
33 comments
Information
Dear reader, to leave comments on the publication, you must sign in.