Russia left the American project of the near-moon station

23 September 2018
0
Judging by the statement of the head of Roskosmos Dmitry Rogozin, our country will not participate in the construction of the Deep Space Gateway (DSG). 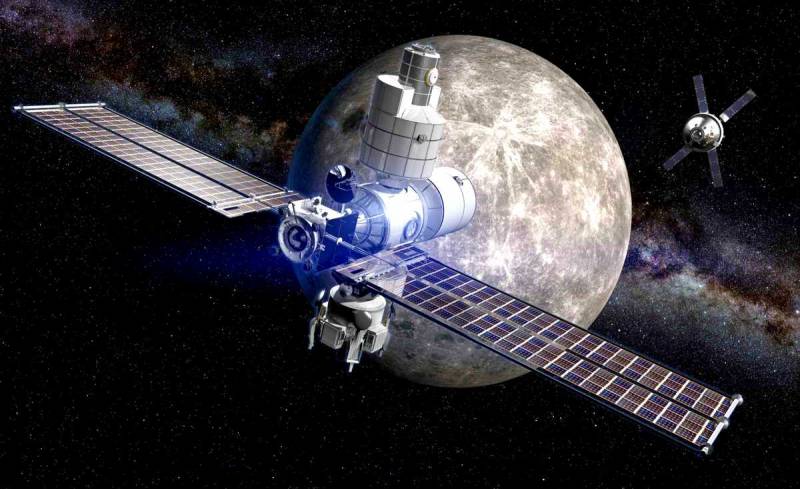 Russia cannot afford to participate in this project in its current form on the sidelines. We create our own transport system.
- said Rogozin.

The reason is an overly subordinate, secondary role with respect to the USA in the project. What does this decision promise to domestic cosmonautics?

The concept of a near-moon visited orbital station was introduced in the United States in 2017. Thus, NASA played on the space ambitions of Donald trump. The new president announced plans to return to the moon with a view to its possible militarization. The White House resident wanted to return the Americans to the Earth’s satellite again in 2019 with the help of the hastily developed superheavy rocket Space Launch System and Orion. However, experts dissuaded Trump from this idea because of its significant risk to astronauts and the image of the United States in the event of a mission failure for technical reasons.

Why is it necessary to create a DSG if there is already an ISS, and even though the Americans are not going to land on the moon? There are several reasons:

At firstis a question economic. In the near future, the United States will receive an extra-heavy Space Launch System, but the problem is that it doesn’t have much work to do. Today, all of the launch requirements of the United States are either covered by existing space companies, or closed by launch vehicles and ships under construction. Americans don’t like to throw money away, so the Space Launch System needs a Moon, or a near-moon station.

Secondly, at a lunar station it will be possible to conduct such studies that are impossible within the ISS, where the astronauts themselves with their life support systems, vibrations, the need to evade large space debris interfere with the purity of experiments.

Thirdly, the station will justify its high-profile name, meaning the gate to deep space. A high lunar orbit is convenient for launching to the next line - Mars. The Martian ship itself can also be gradually assembled by docking it to the DSG, which will achieve significant fuel economy for an interplanetary flight.

Well, finally, political motive. The United States wants to wipe China’s nose with its growing space ambitions. Deep Space Gateway is created on the basis of international cooperation, but, unlike the ISS, the role of the United States in this project is decisive. China, the Americans did not allow to participate in the project.

And I must say that Washington tried to put Russia in its place. This project was interesting for our country as a driver for the development of its own space industry. Thanks to DSG, it made sense to create your own superheavy rocket, Federation ship, spacesuits, station modules, etc.

Unfortunately, the United States began to abuse its dominant position in the project and set unacceptable conditions for Roscosmos: switch to American standards when creating gateways for the station and use spacesuits made in the United States. They did not want to be in the role of Washington’s assistants in Moscow. Obviously, now Russia will have to either concentrate on the development of the ISS with full autonomy for the national segment, or cooperate, for example, with China in creating a similar Deep Space Gateway project.
Ctrl Enter
Noticed oshЫbku Highlight text and press. Ctrl + Enter
We are
Does Russia need a moon?
Russia survive from a large-scale space project
Reporterin Yandex News
Read Reporterin Google News
Ad
We are open to cooperation with authors in the news and analytical departments. A prerequisite is the ability to quickly analyze the text and check the facts, to write concisely and interestingly on political and economic topics. We offer flexible working hours and regular payments. Please send your responses with examples of work to [email protected]
Information
Dear reader, to leave comments on the publication, you must sign in.