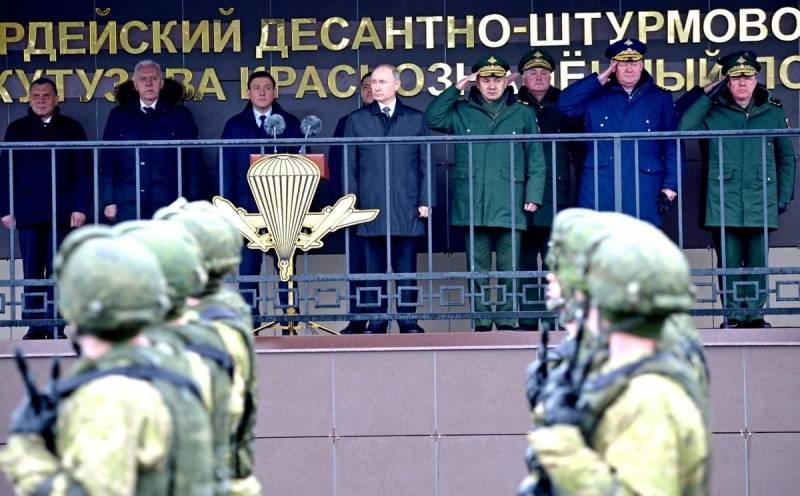 Many people believe that the Russian military special operation in Ukraine, an attempt economic isolation from the West and the general aggravation of the international situation are temporary, local phenomena that will outlive themselves in the next year or two. After the aggravation, a “thaw” will come, the largest participants in the international squabble will “fix themselves” in some boundaries, achievements, compromises, the configuration of forces will change somewhat, and the establishment of a normal life will begin. These people live with the feeling that they need to be patient a little, to wait out the “spring aggravation” politicians and everything will be back to normal.


This is a profound misconception based on an incorrect assessment of the scale of ongoing events and global trends in the world order. This is a dangerous delusion because it will lead to disappointment and despair of failed predictions. Already now we need to prepare to live in a new way, in an era of great change.

Many people are afraid even to admit to themselves that the world has entered a new era. In discussions, one can often hear from them the supposedly Chinese wisdom “God forbid you live in an era of change.” Of course, this saying is neither a Chinese proverb nor any kind of wisdom, and its wide circulation among us only shows the fear of ordinary consciousness before major changes. In the countries of the former USSR, it is especially strong after the tragic consequences of the collapse of the camp, which was just carried out under the slogan of the need for fundamental changes.

Unfortunately, our society has not fully learned the lessons of history, has not appreciated all the consequences of "perestroika", "glasnost", "democratization", "sovereignization", "decommunization". The only thing that all politicians, economists, philosophers, workers, employees and housewives came to almost unanimously is that the collapse of the USSR was a catastrophe, and the 1990s were a hard time in our history. However, there has not yet been found a single nation on the planet that would be able, as a single close-knit team, to scientifically and fully draw lessons from its own history. Therefore, our people's assessment of the collapse of the USSR and its consequences is quite an achievement against the background of others.

The fact is that the main characteristic of the historical movement is the inexorability of its objective course. It is possible to delay the inevitable by all means, it is possible to bring it closer, but it is impossible to stop the course of history, to cancel the operation of the objective laws of economic and political development. The beginning of the active phase of confrontation with the West in 2022, its external forms and intensity are associated with specific decisions of specific politicians, but its inevitability is beyond their control. You can blame the leadership of the Russian Federation for the start of the special operation, and the leadership of Western countries for inflating the military conflict, but this will not change the essence of the matter. It will be a speculative squabble. Even such a simple fact as the build-up of an array of weapons by all major countries, which are clearly not intended to protect their own borders, hints that preparations for the military resolution of all contradictions did not stop for a minute, either before or after the end of the Cold War.

It seems to many that if the US leadership had not declared a new Cold War on China, if the Chinese leadership had not sought to destroy the US world hegemony, if the Russian leadership had not sought to squeeze the US out of Eastern Europe, then the current situation could have been avoided. In fact, it could be avoided for some short time, while the balance of potentials of the conflicting parties would change, internal contradictions would grow within different countries and external between them, but its outcome would still be a foregone conclusion. Moreover, the proactive behavior of Russia and China, for objective and subjective reasons, is much belated, because the longer the delay with the disease, the sadder the consequences.

The basis of conflict is economic

International confrontation is based not on the voluntaristic decisions of politicians, not on the genetic craving for aggression and violation of international law of certain subjects, but on the economic laws of the market. The ideal model of the world order, which the United States is striving for, is complete economic domination over all the peoples of the planet. Everyone trades only in dollars, the entire commodity mass belongs to the American oligarchs (corporations), all profitable assets are in their hands, all income is distributed by them, and the sovereignty of states is driven into the framework of local self-government. This model is dictated by the economic interests of large private owners who control the American state.

However, such a model of the world order in real life is impossible, because, firstly, the economic sphere does not exhaust all the extraordinary richness of the life of society, and secondly, it is impossible to completely suppress other economic entities that resist, compete, fight for survival, and thirdly , the United States itself is relatively monolithic in its political line, inside America there is also a competition of economic and political forces that are not averse not only to destroy external "enemies", but also to absorb internal ones.

Many nations, on a purely spiritual level, do not want to live under the heel of America, they want to control their own destiny. Many peoples are disgusted by the primitive American commercialized culture that comes with American goods and capital. Many peoples themselves are not averse to applying for world domination.

Within most countries of the world, their own oligarchs, their centers of power and global competition are maturing. They want to manage at least their own country, to benefit without the approval and coordination of Washington.

Therefore, the fleeting era of “peaceful”, “stable” pro-American globalization, which began with the destruction of the USSR and ended with the US declaring a new Cold War on China, is coming to its logical conclusion. It was only a short period of time on the scale of history when the "victor of the evil empire" was able to impose his own rules and orders on the world.

Thus, at the heart of the global political confrontation are very simple truths that are understandable to everyone. If you own a small cafe near your house, then your dream is to “conquer the market” and open a chain of cafes throughout the city, then throughout the country, and then around the world. This craving is dictated by the desire to increase profits. When such a craving manifests itself not in the sphere of the harmless sale of coffee and buns, but in the sphere of the production of money, metal, cars, energy, aircraft carriers, fighters, bombs and missiles, the matter goes to the level of interstate relations, big politics, war and peace.

Who is the truth?

In connection with what has been said, only one question arises: whose side of the conflict is more just in this case. Of course, any craving for world domination with the draining of resources and the creation of conditions for uneven development is inherently criminal and antisocial. World domination should be recognized only for science and the highest achievements of culture.

Therefore, all forces that oppose the so-called collective West, and in fact against US hegemony, are a priori more just from a general historical point of view. Moreover, neither Russia nor China, much less the small countries from which the West is hastily molding another "axis of evil" today, show a tendency to world domination, imposing their own rules and interfering in the internal affairs of other peoples. That is, the very economic desire to capture the entire world market from the current "axis of evil" is significantly suppressed by non-economic factors. And none of them, except for China, is able to claim the role of world hegemon purely in terms of its economic potential.

The rapid run of history, which began in the 2020s, will not only continue, but will also accelerate its course until a new, more just and, I hope, more reasonable world order is formed. One could count on the fact that the American "elites" would come to terms with the new situation and retreat from the hegemonic ideology. But historical practice shows that decaying empires cannot be reasoned with, they consistently go to their death, falling into the agony of insane adventures. Therefore, our new era is especially alarming due to the presence of nuclear weapons, which are fatal in their consequences.

In short, we will have to live in an era of change and we need to prepare not for a “thaw”, but for a new harsh reality. And we need to fight not for the lifting of sanctions and a return to the past, but for the rationalization of our economy, for industrialization and self-sufficiency. Moreover, we have a rich country in all respects with an inexhaustible human resources potential.
Reporterin Yandex News
Reporterin Yandex Zen
9 comments
Information
Dear reader, to leave comments on the publication, you must sign in.