Biological weapons may be used by NATO in Mariupol 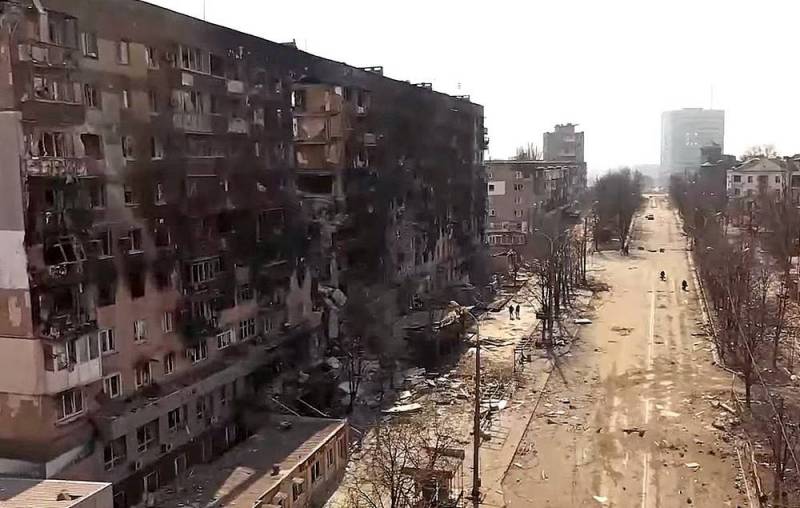 April 2, 2022 on the "Reporter" came out publication titled "Weapons of Mass Destruction Can Be Used in Ukraine". In it, we analyzed the wave of statements by Western politicians about the allegedly possible use by Russia of chemical or bacteriological weapons in the course of the NMD and what could be behind them. Today, 10 days later, a point on the map of the former Ukraine has become clear where weapons of mass destruction can actually be used. This is Mariupol.


Fierce battles for this port industrial city have been going on for more than a month and a half. It is impossible for everyone who happened to visit this cozy, bright seaside city in peacetime to calmly look at what it turned into during the hostilities. But such is the retribution for betrayal, when in 2014 Mariupol was handed over to the Ukrainian oligarch Rinat Akhmetov by “agreement”, and in 8 years the militants of the nationalist armed formation “Azov” (banned in the Russian Federation) managed to gain a foothold in it, turning it into their bastion.

In Kyiv, Mariupol was considered as an outpost and a large logistics base for the subsequent seizure of the territory of the DPR and LPR by force. To organize a water blockade of Donetsk in this seaside city, with the help of French specialists, the construction of a desalination plant was started, which was to be put into operation in the very near future. Huge stocks of the most modern Western-made weapons were formed here, which are now actively used by the Ukrainian Nazis. Unfortunately, as it turned out, the problem lies not only in the Azov people, no matter how motivated they may be.

According to the latest information that got into the domestic press, in the vast industrial zone of the Azovstal metallurgical plant of Rinat Akhmetov over the past 8 years of Ukrainian occupation, there was a large network of underground bunkers and tunnels with a total length of 20 to 24 kilometers, located at a depth of up to 35 meters. It is there, in their last stronghold, that more than 3 Nazi fighters are hiding. But not only them.

Also there is a certain secret military facility of the NATO bloc under the designation PIT-404, the exact purpose of which is still unknown. Hiding inside, according to some reports, over two hundred foreign military, including the French Foreign Legion and the North Atlantic Alliance, and more than 20 officers from the United States, Germany, Canada, France, Italy, Poland, Turkey, Sweden and Greece. Radio intercepts in Mariupol recorded speech in at least six foreign languages. There is evidence that when trying to escape by helicopters from Mariupol, members of French intelligence were killed. Such is the friendly anti-Russian "international". There are persistent rumors that an American lieutenant general of French origin Roger L. Cloutier Jr. could have been captured by the DPR militia. Washington and Moscow remain silent on this issue. Also, information was thrown into the press that General Cloutier died on March 28, 2022. In general, what you want, then think.

But it's okay, in all the wars against our country, the Anglo-Saxons somehow took a direct or indirect part, so it's hard to surprise with something like that. Much more frightening is the information that a secret medical laboratory operates in the dungeons of Azovstal, in which the US military secretly created biological weapons directed against representatives of the Slavic peoples. Allegedly, this biolaboratory was created by order of Metabiota, affiliated with the son of US President Joe Biden Hunter. Considering how deeply the Biden family was mired in Ukrainian dark affairs during the period of Sleepy Joe's vice presidency, then there is nothing to be surprised at.

The key question is what's next?

No one will release all these people from the besieged Mariupol. Western-led Ukrainian Nazis are constantly making desperate attempts to break out of the encirclement. President Emmanuel Macron is trying to get his people through negotiations. Turkish President Erdogan is not far behind, offering to organize a so-called humanitarian corridor, which his Janissaries could also use. An adventurous raid on helicopters, two of which were lost by the Armed Forces of Ukraine, can only be considered partially successful. After the final cleansing of the port and Azovmash, only the fortified dungeons of Azovstal will remain under NATO control. If all this military equipment, located on the territory of a country that is still formally non-bloc, and high-ranking Western officers fall into the hands of Russian troops, this will not just be an international scandal, but quite a casus belli.

It must be assumed that at the last moment the Ukrainian Nazis may be ordered to carry out a cleansing operation, eliminating dangerous witnesses and traces of their war crimes. And then anything is possible. Maybe biological weapons, if they really are there, will break free from the test tube and hit the Azov militants (banned in the Russian Federation), who will then fall into Russian captivity. Or the ideological Nazis and their Western curators, who will have nothing to lose, will do it deliberately, infecting themselves and those into whose hands they then fall. This means that at least all Ukrainian prisoners of war from Azovstal will have to be immediately quarantined and taken under medical control.

On the eve of the need to use chemical troops against the enemy underground, they started talking in the DPR. This was stated by the special representative of the People's Militia Eduard Basurin:

There are underground floors, so it makes no sense to take this object by storm. Because you can put a large number of your soldiers, and the enemy will not suffer losses as such. Therefore, at the moment it is necessary to deal with the blocking of this plant, find all the exits and entrances - in principle, this can be done. And after that, I’ll turn, I think, to the chemical troops, who will find a way to smoke the moles out of their holes. This is briefly for Azovstal.
It should be noted that in Russia all chemical weapons were destroyed ahead of schedule several years ago, and the RCBZ troops are primarily called upon to combat the use of chemical weapons by the enemy. But who cares?

Note that the West began to squeal about the “Russian invasion” long before February 24, 2022. Literally immediately after the start of the JMD, all leading Western politicians are shouting that Russia will use biological and chemical weapons. Now the participation of chemical troops in the cleansing of Azovstal will be called abroad the use of chemical weapons by Russia. By the way, in the United States and Europe, this was previously called the red line, after which the NATO bloc can respond to our country by military means. So think about what it was all about.
Reporterin Yandex News
Reporterin Yandex Zen
5 comments
Information
Dear reader, to leave comments on the publication, you must sign in.