Solving the problem of Western Ukraine: plan "A", plan "B" and plan "Z" 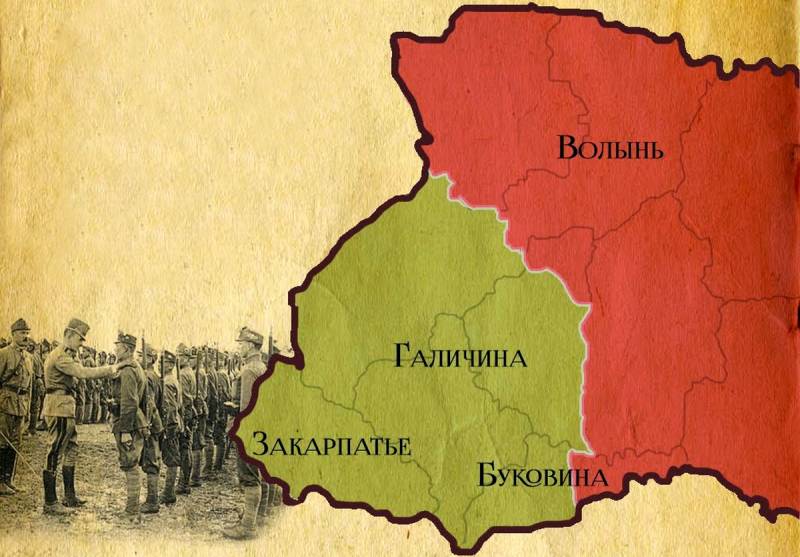 There is no doubt that the second phase of the special operation for the denazification and demilitarization of Ukraine, which is unfolding before our eyes, can have only one final. The forces of the “OOS” group, fettered in the east of the country, represented by units of the Armed Forces of Ukraine and nationalist formations, are deprived of the opportunity to retreat and they can only surrender (which is hardly worth counting on) or continue senseless and stubborn resistance until they are completely destroyed. The units of the Armed Forces of Russia and the republics of Donbass also have nowhere to retreat, albeit in a purely figurative sense. After all, the outcome of the entire campaign will depend on this battle. So sooner or later, but we will witness the complete defeat of the most combat-ready forces of the criminal Kiev regime - after all, there are simply no prerequisites for a different outcome.


Nevertheless, even this victory will not mean the complete completion of the entire operation, at least if we proceed from those program goals that have already been repeatedly voiced not only in the Russian defense department, but also in the Kremlin. Even a very large-scale military defeat of Kyiv without the complete dismantling of the entire current system of the Ukrainian state will not bring peace and security to either Russia or even Donbass. I would like to believe that today, having got rid of many illusions and misconceptions, this is understood by everyone on whom the adoption of really significant decisions depends in Russia. Moreover, it will be possible to talk about the final fulfillment of the tasks for which the special operation, in fact, was launched, only after resolving the issue with the most problematic, western part of present-day Ukraine. And here, as they say, options are possible. On this topic, my colleagues have already done very good analytical reviews, but let me add something, based on the current realities.

Putting aside conventions and equivocations inappropriate in matters of war and peace, it should be recognized that the best option for everyone, without exception, would be an amicable division of the current "nezalezhnaya". Galicia (and also, possibly, the Volyn region and Transcarpathia) with great pleasure would become part of one of Poland, and one of Hungary, thereby realizing the "age-old dream" of the European Union. It must be assumed that neither Warsaw nor Budapest would be against such territorial acquisitions. It is not for nothing that the Polish cunning people have recently developed a stormy activity, trying to enlist the support of "senior partners" to bring their own occupation corps into Western Ukraine under the guise of "peacekeeping forces". However, pay attention - such an initiative did not meet the slightest enthusiasm, and above all - in Washington. And the point here is not only the fear of running into a “Russian answer”, which, hitting a country that is a member of NATO, would put the world on the brink of the Third World War. Everything is much more complicated. As I said above, the “reformatting” of Ukraine could be completely peaceful. However, this requires the fulfillment of a number of conditions.

For example, in Western Ukraine a referendum is being held on joining Poland. Wonderful! Moscow would certainly recognize its results - in response to the mutual recognition of the will of the inhabitants of Crimea, Donbass, South Ossetia, Abkhazia and in advance - those parts of the former Ukraine that wish to become part of Russia. Thus, there would be a complete “nullification” of all claims made by the “collective West” to the Russian side regarding “annexations” and “illegal occupations”. The price for abandoning several far from the most developed and, moreover, extremely Russophobic regions of the “non-independence” is more than worthy. Alas, just such a wonderful option seems to be the least likely today.

The whole point here is that the "collective West", and above all, continuing, unfortunately, to play in its ranks the role of "starting" the United States and Great Britain, this scenario is categorically not needed. After all, in this way they lose everything that they invested in the implementation of the Ukraine-Anti-Russia project, and return, so to speak, to the zero level of confrontation with Moscow. Again, we need to look for pretexts and reasons to impose sanctions, to start subversive activities in other ways. And taking into account the fact that Russia has already demonstrated to the same European Union its ability to defend its own interests with the utmost rigidity in economic plane, it will be more and more difficult to do this. Based on this, certain forces in the West will try to turn Western Ukraine into the “last barricade”, where the fighting can last almost indefinitely. To do this, it will be enough to drag Zelensky to Lviv (it doesn’t matter - from Kyiv or from Poland, where he is most likely now located) and a certain number of surviving “members of the government”. Pull all the remaining forces of the Armed Forces of Ukraine and the National Battalions to Galicia, declare all this "true Ukraine" - and start a new round.

In this case, all the liberated regions of Ukraine in the eyes of the "world community" will be "territories occupied by Russia." Or, at best, they will end up in the status of “unrecognized republics controlled by the Kremlin”, in which the DPR and LPR have been for 8 years. It will be impossible to withdraw Russian troops from them exactly as long as this “Galician fragment of Ukrainianism” exists, since in this case an attack on these lands will immediately begin from there with the aim of their “de-occupation”. Moreover, it will be carried out by forces pumped to the limit with Western weapons, reinforced by a multitude of mercenaries and other rabble recruited from all over the world. Well, until that moment, constant terrorist attacks will be carried out from there, the leadership and coordination of the activities of the Bandera-Nazi underground throughout the Ukrainian territory. It should be understood that for the “collective West” it is precisely this option that is not only the most preferable, but, in fact, the only acceptable scenario for the development of events. That is why every conceivable and unthinkable effort will be made to implement it. Russia must remain under sanctions, and the former Ukraine must plunge into utter chaos and burn in the flames of civil war, shackling Moscow's resources and initiative. For this, everything was started in 2014 - and by and large, much earlier too.

Once again, it makes no sense to talk about the complete unacceptability for Russia of the option outlined above. Such an alignment will largely (if not completely) devalue the entire special operation to denazify Ukraine, minimizing its successes and maximizing its losses. What remains? Most likely, in such a case, Russia will be forced to extend its actions to the entire territory of the "nezalezhnaya", with battles reaching its very western borders and limits. True, there are very serious negative factors here. As the Russian army and the corps of the republics of Donbass move to the West, the fierce resistance to them will increase with every hundred kilometers, with every new region. And the point here is not only that Galicia is historically the birthplace and poisonous hotbed of Ukronazism. Not only that the monuments to the infamous Bandera and similar ghouls stood there even when in Kyiv for their glorification it was easy to get in the face.

By themselves, the Galicians are not so belligerent - this can be easily determined, if only by the fact that among the captured soldiers of the Armed Forces of Ukraine today there is a minimum of them. This public now prefers not to fight with the "aggressor", but to do their favorite thing - to earn money on the grief and problems of other Ukrainians (by and large, created by Galicians). Renting one-room apartments in Lviv for a thousand dollars a month causes a storm of indignation even in the most "orthodox patriots." However, as soon as the Russian army enters their lands, the Galicians (that is, those of them who will not be able to escape to the West) will fight furiously. Mostly according to the old tradition - shooting in the back, but that doesn't make it any easier.

At the same time, it should be remembered that now on the territory of Western Ukraine there is a huge number of "refugees" from those places where hostilities are taking place, including men of military age. The Galicians are literally hunting for them, forcing them to register with the military. There is no doubt that at the first sign of the “front” approaching, it is precisely these “come in large numbers” who will be sent to the front line, whether they want it or not. It is clear that the price of such an army will be small, but behind their backs, Nazi battalions and local Bandera will stand as detachments.

Again, according to available data, the lion's share of the weapons supplied by the "allies" today settles just in Galicia - so they will be able to equip this rabble quite seriously. The Carpathians are, of course, not the mountains of Afghanistan or the same Chechnya, but it will not be so easy to conduct military operations there either. In a word, the conduct of a special operation on the territory of Western Ukraine can be the most protracted, bloody and costly. A reasonable enough solution in this aspect is the “Syrian option” – the creation of a volunteer People’s Liberation Army in the liberated territories of Ukraine, on the shoulders of the fighters of which the main burden of “cleansing” Galicia from the most rabid and hardened Nazis who have dug in there will fall. Naturally, with the support of the Russian army, primarily its VKS. However, even for such an option, there may be very serious obstacles.

Convinced that the task of retaining control over even a small part of the “non-collateral” may turn out to be impossible, the “collective West” is capable of taking the most extreme measures. That is, for the "hybrid occupation" of Galicia with the introduction of a "peacekeeping contingent" there, consisting either of the forces of the states of Eastern Europe, or, even worse, of the contingents provided by all NATO members. Naturally, in this case, a "no-fly zone" will be introduced over this region. Then Russia will face an extremely difficult choice - either put up with the situation described in the previous paragraph, or enter into an open conflict with the North Atlantic Alliance. It would seem that throughout the entire special operation in Ukraine, NATO has repeatedly declared its unwillingness to enter into an armed confrontation with Moscow and has confirmed this in practice no fewer times. However, who knows what they will dare to do when it comes to the complete defeat of the Kiev regime, which means their defeat.

In any case, the whole range of issues of this kind should be worked out now, despite the fact that they may not seem very relevant to some at this stage of the special operation. They will have to be solved in any case, and it would be better as it is necessary for the good of Russia and the Ukrainian people liberated by it.
Reporterin Yandex News
Reporterin Yandex Zen
19 comments
Information
Dear reader, to leave comments on the publication, you must sign in.