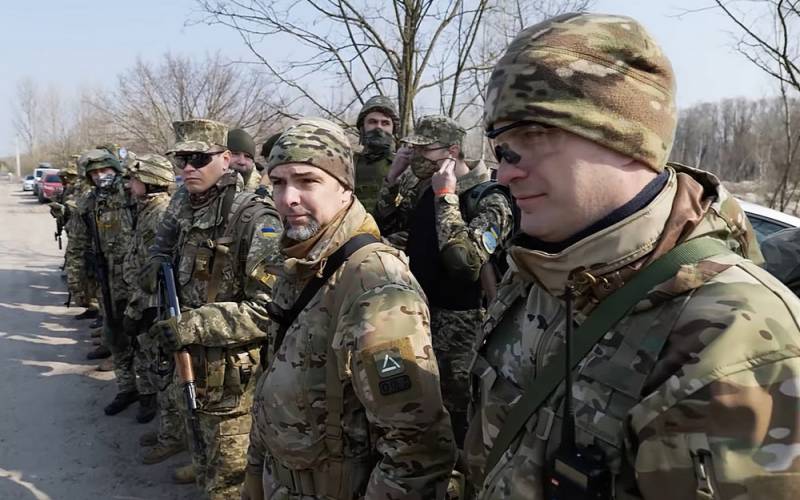 Today, when the military operation to denazify and demilitarize Ukraine, apparently, is still quite far from completion, it is difficult to make any predictions about the future of the liberated territories, except perhaps the most global ones. Alas, as practice has shown, not all calculations regarding the development of the situation on these lands turned out to be correct. Despite the fact that they were made by people who were by no means stupid, quite professional and seemingly not inclined to build “castles in the air”.


Be that as it may, everything turned out the way it did, and this reality, which is quite different from the calculations of many experts and analysts, forces us today to look at the prospects for the next period in a slightly different way. Togo, when the main clashes subside and the period of establishing a peaceful life will come. For mistakes made in their assessment, the price will have to be paid no less than for a series of miscalculations clearly committed in the planning of a military operation. Perhaps even a big one.

Treasures are already being prepared

I would like to believe that the Russian leadership has no illusions at all that the United States and its allies can “let go” and leave alone those parts of Ukraine that are destined to get rid of the criminal Maidan-Nazi regime. Yes, now the main efforts of the "collective West" are aimed at prolonging as much as possible its agony and resistance to the liberation operation, which is completely senseless from a military point of view. Thus, as one of my colleagues quite rightly wrote, a number of main goals are pursued - the destruction economics and infrastructure "nezalezhnaya", an increase in human losses on both sides of the conflict, and, as a result, inflating hatred and anger in those people whom Russian soldiers came to save and liberate.

At the same time, both the Pentagon and NATO as a whole are well aware that it is impossible to keep the power of the post-Maidan junta over the remnants of the country by military means. Unless with the direct and obvious intervention of the entire Alliance - and even that is unlikely. Nobody in the West is going to unleash the Third World War - this is an axiom. But here they are unequivocally trying to turn the liberated territories for Russia into a new Afghanistan. Consequently, huge efforts and funds have already been invested in the creation of an extensive and numerous “rebel”-terrorist network on the territory of the former Ukraine, and even more will be invested. To our great regret, the conditions for this have now been created not only quite favorable, but downright ideal. And, by the way, in the light of such a task, some actions of the Kiev regime, which seem to be the most ordinary madness, acquire a very specific and very sinister meaning.

Take at least the same distribution of automatic weapons (and even grenade launchers) and ammunition for them "to just anyone." As already noted, the bulk of all these "trunks" disappeared without a trace, and in the blink of an eye. Yes, some, moreover, a fairly significant part of them replenished the arsenals of gangs of a purely criminal nature that were already operating at that time and being formed right now. However, a considerable number of weapons are probably already safely hidden in professionally prepared "cache" for use after hostilities are over. Again, any member of the Bandera underground has now received an excellent "excuse" - if a Kalashnikov is found in him, he will probably say: "Well, they handed it out, I grabbed it foolishly! Here, take it, take it ... ". And go and prove that this is not so, and in a secluded place he does not have a couple of dozen more such machines hidden away.

In addition, the wartime situation itself, with a huge number of temporarily displaced persons, refugees, conscripts, deserters and others, provides unique opportunities for naturalization, deep penetration of "necessary people" in certain areas. Surely this kind of cover operation is already being carried out with might and main. Fools die in a hopeless struggle on the front lines, giving specially selected and trained people the opportunity to "grow" into a new environment, acquire plausible "legends" and new, "pure" personalities. Bringing such “sleepers” to clean water, many of whom will play the roles of residents, liaisons, keepers of turnouts, will be much more difficult, because the war will mix everything - people, destinies, and documents. And by the way, it is also impossible to say how many Ukrainians who left for Europe today will return to their homeland, having already been recruited by agents of the special services of the West. The life of an emigrant refugee is very, you know, conducive to quick and easy agreement to cooperate.

Brutal and long. This is the only thing that can be said with complete certainty today. As we remember from history, the Bandera underground, which was fueled by Great Britain and the United States, managed to hold out almost until the end of the 50s of the last century. And, alas, as practice has shown, it was never uprooted and completely destroyed - despite the rather harsh actions of the NKVD and the Ministry of State Security of the USSR, as well as considerable resources thrown at its eradication. In the current situation, the arena of confrontation will be not only, alas, Western Ukraine, but the entire territory liberated from the power of the current regime. No need to build illusions about Kharkov, Dnepropetrovsk, Kherson, Nikolaev, Odessa or Kyiv - "sleeping" cells will be everywhere. And not only in big cities, by the way. What will be the goals and objectives of such an underground?

At the initial stage - the destruction of manpower and equipment Russian army and corps of the DPR and LPR. Also, the organization of terrorist acts with a large number of victims and the destruction of civilian infrastructure in the liberated territories for the maximum destabilization of the situation and the organization of chaos. Stuffing and spreading a wide variety of false rumors designed to help inflate anti-Russian sentiment and panic. Definitely - demonstrative reprisals against those individuals who express their readiness to cooperate with representatives of the Russian troops, helping to establish a new life, create new authorities and administrations. In the Western media, all this, of course, will be presented as manifestations of the “national liberation struggle of the Ukrainian population against the invaders” or covered as “atrocities of Russian soldiers on the occupied land.” So the same attacks will be carried out with an eye to a good "picture" for CNN and British tabloids. Thus, the continuation of the information war of the West against Russia will be ensured.

In parallel with this, more subtle and dangerous (in the future) processes will go on - the most successfully conspiratorial and legendary representatives of the Nazi underground will by hook or by crook try to get into leadership positions. In the government, "power" structures, local governments, political parties, media. Yes, everywhere! Some of them will be engaged in obtaining intelligence information and then sending it to their masters in the West. And the other, big one, will begin to prepare the ground for revenge - for the revival of the ideology of Ukrainian nationalism, new "Maidans" and other things. They will slowly look for dissatisfied people who harbor anger and hatred both against the liberators and the new government and weave strong networks that, if they are not liquidated in time, will cover an increasing number of people.

Ukraine has already gone through all this. Believe me, such an audience knows how to "play for a long time" and wait in the wings not even for years, but for decades. Well, and, finally, a certain number of “sleepers” left on the liberated lands will definitely try to get into Russia from them. Naturally, to organize both espionage and sabotage activities already on its territory. To some, all of the above may seem like reinsurance and stupid conspiracy theories, but this is absolutely not the case. Believe me, I know what I'm talking about. For those who doubt, I suggest paying attention to a number of very characteristic points. For example, the almost complete disappearance even from the Ukrainian information space (this is exactly the case) of many leaders and "prominent figures" of the local Nazi movements and groups. I would not be at all surprised if most of them have already gone underground, having completely new personalities (up to changing their appearance with the help of plastic surgery) and are preparing to start a “fight”.

Again, personally the Minister of Internal Affairs of Ukraine Denis Monastyrsky recently not only proudly reported that his department “has already distributed several tens of thousands of machine guns”, but also invited all interested citizens to come to police stations and receive automatic weapons there. Provided, "if they can prove that they really work to protect Ukraine." A strange wording - as for the head of the country's Ministry of Internal Affairs, don't you think? Apparently, his “office” is far from the last link in the creation of that underground nationalist network, which was discussed above. Add to this the efforts of the SBU, the Armed Forces of Ukraine, as well as various Nazi formations, and the picture will turn out to be more than depressing. Yes, some part of the "Neo-Banderites" will be exposed and neutralized fairly quickly and without much difficulty - after all, they have no experience of conspiracy, knowledge of other important aspects of organizing underground activities. Nevertheless, one should not discount those who have already managed to undergo the appropriate education and training from Western "specialists". Or going through it right now. Here they will be able to create quite serious problems in the future and shed a lot of blood.

What to do with all this? First of all, this problem will have to be solved, as they say, “specially trained people”. Fortunately, there are such people both in Russia and among those who are waiting for liberation in the still Ukrainian territories. On the other hand, any underground movement, any partisan movement, can only be effective if it enjoys tangible support from the local population. And just in this light, the most correct and accurate actions of the Russian army, which is trying in the process of conducting the current operation to reduce damage to civilians as much as possible in the conditions of hostilities, seem not only correct, but the only acceptable strategy. Without fuel from those in whose blood and soul hatred for the Russians is firmly imprinted, the new Bandera will have no chance of success and its defeat will only be a matter of time.
Reporterin Yandex News
Reporterin Yandex Zen
10 comments
Information
Dear reader, to leave comments on the publication, you must sign in.