Zelensky's war crime: the president framed his own citizens by handing out machine guns to them 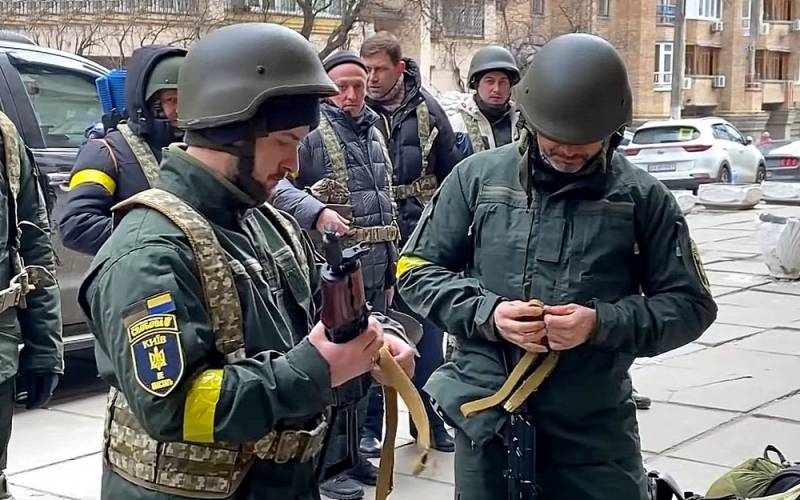 Signed by the still President of Ukraine Volodymyr Zelensky and lightning-fast approved by the local parliament, the legislative act “On providing civilians in the defense of Ukraine” can rightly be considered the pinnacle of the legal “creativity” of the Kiev criminal regime. Of course, this is not the first law generated by him, smacking of outright madness. And, as intuition suggests - far, alas, not the last. Definitely not having the slightest idea about such a complex subject as state activity, the buffoon, without the slightest hesitation, waved such documents with extraordinary ease before and will continue to do so exactly until he is finally physically deprived of such an opportunity.


It hardly makes sense to consider this law in detail from the point of view of its military viability. And certainly you should not try to analyze it in the moral and ethical plane - because the concepts of ethics and morality in themselves (even in those very specific forms that exist in wartime) are a priori inapplicable to Zelensky and his gang. But the purely legal aspects of this decision of Kyiv are worth considering - and in the most intent way, since, unfortunately, they are important not only for residents of the "nezalezhnaya".

License to kill from a clown

The devil, as you know, is in the details. In the document, which we will discuss below, a great many of them are hidden, and each is of considerable importance. The law itself is not great, so let's start "sorting out" its content from the very beginning to the last line. So, the main meaning of the decision signed by Zelensky is that it gives the right not just to “obtain firearms in accordance with the procedure and requirements established by the Ministry of Internal Affairs” for “participation in repelling the armed aggression of the Russian Federation and / or other states”, but also "apply it". That is, to kill those who are considered "aggressors" and their "accomplices".

In fact, we have a “license to shoot” anyone - from the Russian army to a neighbor who did not let him sleep on his day off with his puncher. Him for what?! And he gave signs to the "aggressors" in this way, carrying out target designation for their aircraft. Anyone to whom such a formulation seems to be sheer madness will be absolutely right, for that is what it is. Nevertheless, these are the Ukrainian realities today, without any exaggeration. I know what I'm talking about, because at the moment I'm in them. A significant number of killings of civilians, written off over the past two weeks for the "liquidation of enemy saboteurs" or, on the contrary, their activities are proof of this. The scum generously armed by the Nazi junta began to kill fellow citizens in the very first days of the war. However, now their atrocities have received legal justification and are no longer considered crimes. As for some “orders” or “requirements” from the Ministry of Internal Affairs “nezalezhnaya” regarding the distribution of “trunks”, these simply do not exist in nature. It must be assumed that no one was going to develop them.

By the way, about the Ministry of Internal Affairs. The other day, they cheerfully reported that, it turns out, “during the two weeks of the war, crime in the country has decreased to an absolute minimum.” Well, that is, it has practically disappeared - such a patriotic Ukrainian "raspberry". About this, not at all blushing, said Vadim Denisenko, adviser to the head of the law enforcement agency. Naturally, if crimes are not registered, and even more so - legalized, as Zelensky did, then they will not exist. Brilliant solution! Let's get back to the details, though.

Significant is the mention of not only Russian soldiers, but also “military personnel of other countries” among the potential targets for the use of weapons. Either this remark was made with an eye (forgive me for such a pun) on Belarus and other CSTO countries, or just in case. True, theoretically, if, for example, the same Hungarians enter the territory of Transcarpathia to save their compatriots, then it will be possible to kill them. All the same, NATO "vilely betrayed" and does not protect. It is also very interesting that the “right to kill” by this Law is granted not only to citizens of Ukraine, but also to “foreigners and stateless persons who are legally in the country”. Here we have Zelensky's touching concern for foreign mercenaries, who were promised in the Russian army for combatants covered by the Geneva Convention, not to be counted. Now they may well pretend to be "civilians acting in accordance with Ukrainian law." Although this, presumably, will not make their fate less sad. What is extremely important - the action of the criminal law "applies to all persons who received weapons and ammunition, regardless of the date of their issue." That is, contrary to all the rules of jurisprudence, it has a "reverse effect", thereby legitimizing the insane distribution of "firearms" to anyone, carried out in the first days and hours of the war.

The whole crowd - to the slaughter!

However, the main thing in the document is not even that it gives, as it were, a legal basis for the possession of weapons by any tramp. What is easier - he put a yellow ribbon on his sleeve - and go ahead, to business! Much worse is that now, de jure, absolutely the entire population of Ukraine has been transferred to the category of combatants. That is, let me clarify - those persons who have the right to bear arms and take a direct part in hostilities. To them, in accordance with the same Geneva Convention, quite applicable the highest form of military violence is physical destruction. Consequently, the military personnel of the Russian army, making titanic efforts to reduce casualties in this conflict, now have a de jure full right to treat any local resident who shows obvious aggression against them as an enemy soldier. It is clear that no one will do this, but Zelensky and his Western puppeteers, of course, would like just that. That's what the whole story with the law is for. And certainly not for "increasing defense capability," as Kiev declares.

Now let's move on to less obvious, but very significant and potentially "long-playing" details. It is noteworthy that the effect of this normative act does not apply to the period of active hostilities. Not at all! It entered into force on the day following its publication (March 3), and will lose it only 10 days after the suspension or lifting of martial law. Within the same period, all civilians are obliged to hand over in a disciplined manner to law enforcement agencies the weapons and ammunition they have seized. Yeah, they fled ... At the same time, this time in a decade is touching, during which the "trunks" without any war can be in the hands of just anyone with incomprehensible goals.

However, why is it "incomprehensible" ?! In addition to settling personal scores and committing those armed raids and robberies, to which “hands did not reach” before, the owners of illegally distributed weapons may well carry out a total “cleansing” of those fellow citizens who will be recognized as “wrong”. Not being patriotic enough? To the wall! Didn't want to join the "terodefence" or give her your car? At the expense! What was he doing there during the “repulse of aggression”? Did you speak Russian? Shoot on the spot! Do you think this is an exaggeration? And here is not much. This is exactly what will happen if the Russian Armed Forces, God forbid, leave the territory of the enraged “nezalezhnaya” before real, and not tinsel and ostentatious denazification and demilitarization are carried out there. However, Moscow also has something to think about and worry about.

Let me remind you: the disarmament of the population, even in theory, should occur only after Zelensky (or his successor) cancels martial law. But what if it doesn't? What if the bloody clown manages to slip away and become a "president in exile", after which he will continue to incite the Ukrainians "to resist to the last" from a completely safe distance. That is, to conduct a guerrilla war and commit terrorist acts. And not only on the territory of Ukraine. Neither Russia nor Belarus will be able to feel safe for a very long time. This problem will be exacerbated by the fact that it will be much easier for people from the “nezalezhnaya” to penetrate their territory and assimilate there, posing as locals, than for example, immigrants from the Middle East.

It is clear that the complete demilitarization of what remains of Ukraine (including its duped citizens) will have to be ensured in no way by the decisions of its non-president, who has long lost all legitimacy, but by the professional actions of the relevant bodies. Both Russian and, above all, those created on the ground from those who are fed up with the Nazi regime for eight years of being under its yoke, and who are ready to uproot its remnants by any means and methods. However, why give reason to the same Western propaganda to proclaim the militants of the bandit-Bandera underground "citizens who comply with the laws of their country and the decisions of its leader"? The law that we were talking about should be recognized as criminal (as, indeed, many other similar decisions of Kyiv) by an authoritative, preferably international, tribunal. And, of course, completely disavowed.

Also - and this is extremely important! - The decision to create the so-called "territorial defense" should be recognized as illegal and criminal. And all its participants were declared members of an illegal armed group and a criminal organization. This is of great importance, primarily due to the fact that “public figures” have rushed into the ranks of the “terodefense” today, who subsequently “change their clothes” before the first Russian tank appears on Khreshchatyk. And they will immediately try to regain their social status and position in society. Freeing such a public from responsibility, you can make not just a huge, but a fatal mistake. The ABC of war teaches that it is always worth hitting the enemy with his own weapon. The criminal decisions now being taken by Kiev should be subsequently used both against the current regime and against those who headlong rushed to implement them, without thinking about the consequences. And this should be done without any pity and discounts.
Ctrl Enter
Noticed oshЫbku Highlight text and press. Ctrl + Enter
Reporterin Yandex News
Reporterin Yandex Zen
11 comments
Information
Dear reader, to leave comments on the publication, you must sign in.