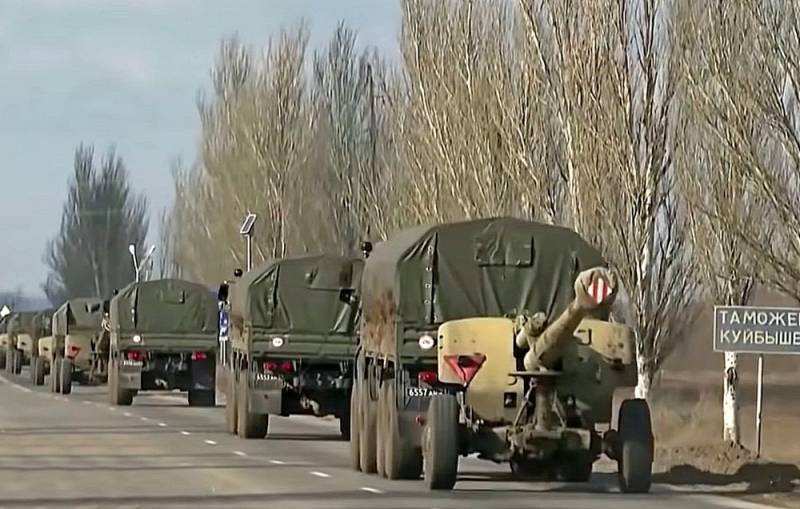 As it turned out, the delusional dreams of “nationwide resistance”, which would result in the death of thousands of civilians and the most serious destruction possible, do not leave the current criminal Ukrainian leadership even after the start of real hostilities. The installation of multiple rocket launchers, air defense systems, strike weapons in densely populated residential areas and quarters - alas, all this is true. I have a lot of evidence from direct eyewitnesses whom I trust.


However, below we will talk about something else - about the truly insane propaganda and agitation that is now being carried out through all the official information channels of Ukraine, which is impossible to read without shudder and disgust.

Let's start with the fact that the "victorious reports" cited there - about dozens of "killed tanks", "destroyed aircraft" and "huge losses in manpower" should convince both military personnel and other citizens of the country that they should listen to exhortations to end the senseless resistance is not worth it in any case. It is necessary to "hold out", while "destroying as many Russians as possible." After all, if you believe the figures dumped in these information dumps, the Russian Armed Forces are already practically defeated and are forced to bring literally the last reserves into battle. And the West is about to fall on Moscow "with all its might" and force it to capitulate.

The worst thing is that in this way they are brainwashing not only the soldiers of the Armed Forces of Ukraine and the National Guard, but also the civilian population. I will allow myself a few verbatim quotes - do not blame me, but everyone SHOULD know this. At least in order to subsequently use it as evidence when accusing the current Kiev junta of horrendous war crimes. So:

A special request for residents of Ukrainian villages and small towns, as well as everyone who has a suitable opportunity. If a convoy of Russian armored vehicles passed by you, after some time a convoy with fuel will follow it. Hold her or burn her. Russian tanks will simply stop, our troops will capture them and use them against the enemy
- Alexey Reznikov, the Minister of Defense of the "non-independent" begs his compatriots.

That's how interesting! I would like to ask: “And your tanks, therefore, are over? Or close to it?

"Burn the columns" is offered by "Molotov cocktails". Detailed instructions for the manufacture of which are regularly published by government resources - up to the websites of city and district administrations. What is characteristic is that most of them are exact copies of those that “walked” on the Web in 2013-2014, during the “Maidan”. Then they burned Berkut with these cocktails, now they want to kill Russians. Quite predictable and natural succession. At the same time, the question of what will happen to the arsonists when the military personnel fulfilling the Oath will protect military property, as they say, is not sharpened. After all, the answer is already obvious, but for the leadership of the Armed Forces of Ukraine and the country, which has turned into a gang of war criminals, the worse the better.

In other cases, residents are taught how to put sugar into the fuel systems of the Russian equipment, and when it stalls - again, burn, having dealt with the crew. And also - to treat poisoned food and drinks. Such “useful advice”, as a rule, is published in parallel with tales that the advancing units of the Russian army “do not have fuel and food reserves” (but what about diesel columns that need to be destroyed ?!), and therefore their soldiers “roam in Ukrainian villages, begging for fuel and food.

Also, psychosis is constantly winding up about the “Russian saboteurs”, which, of course, are already operating almost everywhere. Doing something on the roof of the house? Saboteur! Is he drawing something on the fence or on the road? Saboteur! Looks somehow "wrong"? Saboteur! Notify the military immediately, and even better - kill on the spot. After the rumors about the "invasion of the Chechens" blown up to the sky, it is better for citizens of eastern appearance not to appear on the streets of Ukrainian cities. According to my information, a certain number of "Chechens with Russian passports" have already been killed in Kyiv without any trial. Although it could be people from any region of the Caucasus.

At the same time, Ukravtodor was noted as a “brilliant strategic move”. There they started ... complete dismantling of every single road sign on the territory of the country! They call on the entire population to unanimously join this act of vandalism. After all, "Russians have poor communications and are completely unaware of the terrain." Therefore, the absence of road signs "will help them drive straight to hell." In the underworld, it must be assumed, those who thought of such a criminal decision, which will undoubtedly lead to a huge number of accidents, will most likely end up.

Hatred and malice seethe in the cauldrons of the "official information resources" of Ukraine, spilling out from there a poisonous and burning witch's brew. The insane leadership of the country is not going to save the lives of its citizens - it intends to earn the approval of the West at the cost of as many of their deaths as possible. It's time to end this bloody bacchanalia - and the sooner the better.
Reporterin Yandex News
Reporterin Yandex Zen
16 comments
Information
Dear reader, to leave comments on the publication, you must sign in.