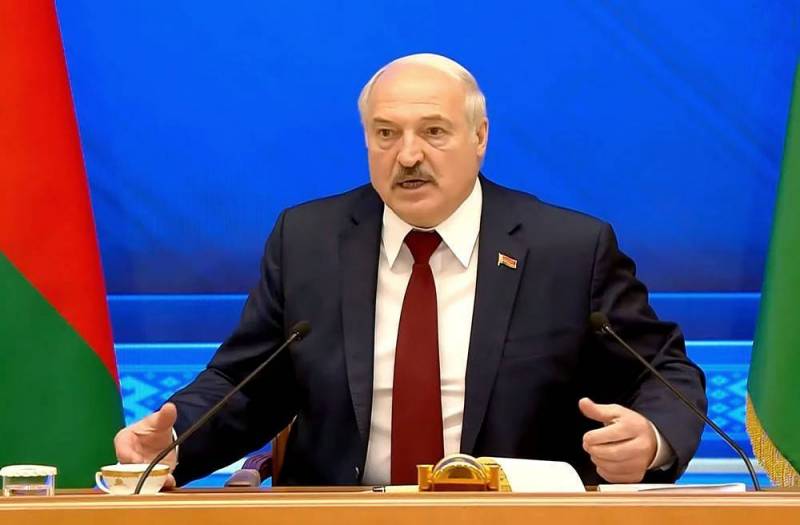 February 22.02.2022, XNUMX will be a very significant date for all three Slavic states. This morning, Russians and Ukrainians woke up in a different reality, in which two new states appeared - the Donetsk and Luhansk People's Republics. And in fraternal Belarus, a nationwide referendum began on the next change in the Constitution, which will determine its life for decades to come.


The main day for voting on amendments to the Basic Law of the Republic of Belarus is set for February 27, early voting began today. The event is widely covered in the Belarusian media, agitators travel to enterprises and institutions, who tell how much better the life of ordinary people will be after the referendum, and everyone is photographed. It is expected that at least 60% of voters will take part in the plebiscite, and everything will go as it should. Law enforcement agencies of the republic are ready to quickly stop all possible provocations that opponents of President Lukashenka may try to arrange. What does not suit them in the changes promised by Alexander Grigorievich to the Basic Law?

In fact, the Belarusian Constitution has already been changed several times, and each time in favor of President Lukashenko. A trial ball was thrown in 1996, when it was possible through a referendum to move the re-election period by 2 years, to 2001, with the following wording:

The President of the Republic of Belarus retains his powers. The term of his powers shall be calculated from the date of entry into force of this Constitution.
Having been re-elected, in 2004 Alexander Grigorievich initiated a second referendum, during which restrictions on the number of presidential terms were removed from the Basic Law, which he later took advantage of. However, many Belarusians in 2020 for some reason turned out to be against the next re-election of Lukashenka to the post of head of state.

Mass protests were suppressed only by force after Moscow directly and unequivocally supported Minsk. The elections themselves in Belarus and their results in the West were declared invalid, and President Lukashenko is called illegitimate there. Holding on to power de facto on bayonets, Alexander Grigoryevich promised his fellow citizens such a Constitution that this time would definitely suit them all:

Come, sit down and work on the Constitution. We put it to a referendum, adopt the Constitution, and I will transfer my powers under the Constitution to you, but not under pressure.
So, what will be accepted there soon? To understand what is happening today in Belarus, it is necessary to take into account political processes in Russia and Kazakhstan.

The Constitution of the Russian Federation was recently amended, according to which Vladimir Putin received the right to be re-elected for two more 6-year presidential terms. Also, the State Council was mentioned in the country's Basic Law, a certain supreme coordinating and control body that stands above the three branches of power, and which, in theory, the retired President Putin can lead in the future. Probably the State Council - this will be the place of an honorary pension for Vladimir Vladimirovich after 2036.

Reasons to believe so give us the recent dramatic events in friendly Kazakhstan. Ex-president Nursultan Nazarbayev left the country to the official successor Kassym-Jomart Tokayev, placed his relatives in key positions of power, and he himself headed the National Security Council, as it seemed, for life. However, during an unexpected coup d'état, the Nazarbayev clan was removed from the levers of government, and Nursultan Abishevich himself lost his post as head of the National Security Council.

All these lessons, of course, were taken into account in Minsk. Several interesting innovations will appear in the updated Belarusian Constitution at once.

At first, former presidents will receive immunity guarantees for all acts committed while in office.

Secondly, presidential terms will grow to 5 years, but the total number of terms will be limited to two. However, personally for President Lukashenko, the magic rule of “zeroing” will work. That is, all its previous terms, including the current one, will not be taken into account. This gives him the right to be re-elected again twice for 5 years, for a total period of 10 years.

Thirdly, upon retirement, when Alexander Grigoryevich turns 77, unless, of course, the fourth referendum on amending the Constitution takes place, Lukashenko will be able to head a new state body - the All-Belarusian People's Assembly (VNS) - the country's highest representative body, which has even greater powers, than the Russian State Council and the Kazakh National Security Council. The ANC will not only be able to control all the traditional branches of power, but will also have the right to initiate the impeachment of an objectionable president.

It is curious that nothing will prevent Alexander Grigorievich from combining the posts of the President of Belarus and the head of the All-Belarusian People's Assembly supervising him. Lukashenka himself very directly and frankly commented on the legislative initiative as follows:

Constitution - I wrote it myself. The lawyers wrote with a pen, and I dictated, because I saw what powers I needed to keep the country.
Such is the local specifics.
Ctrl Enter
Noticed oshЫbku Highlight text and press. Ctrl + Enter
Reporterin Yandex News
Reporterin Yandex Zen
5 comments
Information
Dear reader, to leave comments on the publication, you must sign in.