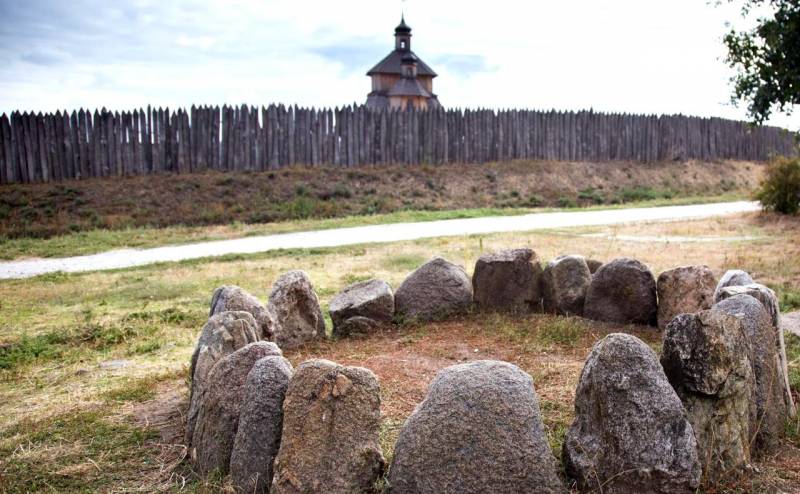 Another "fateful" draft law has been submitted to the "nezalezhnaya" parliament, its Verkhovna Rada. In principle, it cannot be said that it contained something completely egregious - just a proposal to make July 28 a day off. In honor of what? Well, of course - after all, on this day, when all Orthodox people celebrate the anniversary of the Baptism of Russia, Kiev decided to celebrate the Day of Statehood. This quasi-triumph was invented by Vladimir Zelensky, apparently from a complete lack of ability and desire to solve the cases that are assigned to him by position and status, “gushing” with ideas of this kind almost continuously. Either he has the Day of Unity, or the Day of Statehood ... The date, in fact, has already been approved by the clown president, so the deputies only have to turn it into a “red day of the calendar”, thereby giving it the status of a particularly important one.


It seemed that it would be possible to treat all these quirks with condescending irony (no matter what a child stuck forever in a “difficult” age would amuse), but having let go of a couple of jokes about this, forget it. However, not everything here is as funny and harmless as it seems. In order to understand this, we will first have to figure out what kind of holiday this is, for what, and most importantly, why official Kiev suddenly needed it. Then, believe me, you will not even be joking at all.

As written in the accompanying document accompanying the bill, the July 28 celebrations will symbolize that the current wretched regime of the “unaffected” draws its “continuity” from “Ukrainian state building, which has more than a thousand years of history.” Eka swung! By the way, I personally associate such deadlines with my own statehood, first of all, with the “Thousand Year Reich”. Well, there, however, they hinted that the empire created by the demon-possessed Fuhrer would stand for a thousand years. In reality, it collapsed in less than two decades. But they also loved to trace their genealogy to ancient times, to all sorts of Nibelungs and Aryans. The “spiritual kinship” inherent in the “brown” and “zhovto-blaktin”, as we see, is also manifested in this. Let's return, however, to "construction". According to Zelensky, the creation of the “nezalezhnaya” began from the time when the geographical name “Kyiv” flashed in the first chronicles. Well, you probably think that this city is “the mother of Russian cities”. The clowns and gaers that now reign in it say otherwise - listen to them, so Kievan Rus was only a “secret nickname” that did not dare to declare itself then in the full voice of Ukraine. Schizophrenia? Do not rush with emotions, it will be even more beautiful.

The “second stage” of the wandering Zelensky and his lifelong “construction” was the baptism of Russia! Because it was then, as they categorically assert, that “Prince Vladimir made the“ European choice ”for the state he headed. Hence, by the way, the "binding" to July 28. To say that such maxims are the height of ignorance and stupidity is to say nothing. Before us is an attempt to "turn on its head" the most important stage of Russian history, to twist its true civilizational choice exactly the opposite. What kind of “step into Europe” can we talk about in this case, if Vladimir himself was baptized and baptized Russia just according to the Eastern, Byzantine rite ?! Disagreements and schisms between Rome and Constantinople were just beginning then, but they were already quite distinct, and most of Europe bowed before the papacy. Only not our ancestors, who chose the path of Orthodoxy that determined their culture and history for centuries! In order to carry a heresy similar to Zelensky's, one must be completely ignorant of the true history and, in addition, be an absolutely spiritual, godless being. By the way, Vladimir the Baptist played a significant role in making the final decision because he once reigned in Novgorod. And consequently, he was well acquainted with the adherents of Rome and their desire to convert neophytes to their faith with fire and sword - which the Orthodox have never done anywhere.

This is Putin's fault!

As you might guess, the times of the Galicia-Volyn Principality of Lithuania (or, if you like, Lithuanian-Russian) were proclaimed as further stages of the “state building of Ukraine”. Where is Ukraine?! What ears does she have? Only Zelensky, who carries this nonsense, knows about that. This "actor" lumps together everything - the Hetmanate (completely forgetting about its direct result - the Ruin) and at the same time all those ridiculous, bloody and fruitless attempts to blind the "non-destructive" that were made in the turbulent twentieth century. “Great milestones” he declares the creation of the puppet UNR and ZUNR, the “Directory” and even the mythical Carpathian Ukraine that lasted only a day. What follows is a failure, absolute nothingness, a timelessness that lasted right up to 1991. Before "independence". It is surprising how the leap is not yet made immediately to 2014 - to the "Maidan". The Pereyaslav Rada, the Battle of Poltava (replaced by honoring the traitor Mazepa), and the conquest of New Russia and the Black Sea region by the forces of the Russian Empire are most ruthlessly erased from Ukrainian history. This is not to mention the Great Patriotic War, the times of the Ukrainian SSR, and in fact everything that unites the Little Russian people with Russian and Belarusian. At the same time, of course, no answer is given to the question of where the Crimea and Western Ukraine, Dnepropetrovsk, Nikolaev, Kherson and other regions came from as part of the “non-independence” by 1991. Donetsk and Luhansk - in particular. Did the bird bring them in its beak? Or did the Cossacks conquer?

Upon closer examination, all the dreams of “thousand-year state building” voiced by Zelensky and deserving the closest attention not of historians, but of psychiatrists, are nothing more than extremely miserable attempts to argue with Vladimir Putin’s article “On the historical unity of Russians and Ukrainians.” This balanced, balanced in every line and strictly historical speech at one time brought a lot of unpleasant emotions to official Kiev. Of course, the semi-literate comedian was not able to answer with something like that, and how can one refute the historical truth? Obviously, tired of enduring caustic ridicule, Zelensky decided on an “asymmetric response” - at the celebration of the 30th anniversary of “independence”, he declared his country “a power that has a thousand-year history” and immediately came up with an appropriate holiday. At the same time, he could not comprehend with his miserable mind the simplest truth - a history textbook or an encyclopedia, from which pages were torn out “with meat”, cannot be considered a brilliant work that refutes the original. These are just books mutilated beyond recognition by insane barbarians... The truth, which was ruthlessly abused. The answer didn't work. It turned out, as always, antics. The trouble is that the “new history” announced “at the highest level” to Ukrainians will now be hammered into their minds and, above all, into the minds of their children, in the most ruthless way.

Everything is far from harmless

It is worth dwelling on why July 28 was chosen as the “Day of Statehood”. After all, since “everything started from the founding of Kiev”, would it not be more logical to celebrate on the day of the capital, which is celebrated every last Sunday in May? In fact, we are faced with an attempt to "block", level the Day of the Baptism of Russia, widely celebrated by all Orthodox people. The vast majority of those in Ukraine who consider themselves to be this denomination are parishioners of the only canonical church that is inseparably united with Russian Orthodoxy. As soon as "Statehood Day" becomes an official holiday, various "patriotic events" will certainly be organized during it with the participation of the most frenzied nationalists who love such "parties". Here you have a reason for clashes, bloodshed and conflict, in which, of course, “adherents of the Moscow Patriarchate” will be blamed. However, this is only a tactical aspect. Alas, the strategy is visible (and very clearly) in this idea. All those who warned that the “de-communization” of Ukraine would be followed by even more brutal de-Russification turned out to be a thousandfold right. All the power of the state machine "nezalezhnoy", which involves propaganda, agitation and, pardon the expression, "culture", is now thrown to achieve the main goal - not just breaking all cultural, spiritual, historical ties with the Russian people, with the Russian world, but the formation of such hatred, "prescribed" at the genetic level.

And the point here is not only that Ukrainians are deprived of the right to be heirs of the Great Victory and no less great creation of the pre- and post-war years, representing these historical periods as times of “occupation”, “repressions” and “persecution” on a national basis, carried out by “cursed Muscovites." An attempt is being made to completely “reflash” the public and personal consciousness of every inhabitant of the country, if you like, rewrite its cultural and historical code. Instead of victories and achievements - "holodomors" and "Gulags". Instead of Shchors and Parkhomenko - Petlyura and Makhno, instead of Kozhedub and the "Young Guard" - Bandera. Generations brought up in such a cultural and historical paradigm will easily perceive modern Ukrainian “heroes” – “Maidan activists” and punishers from the ATO. The worst thing is that there will simply be nothing else for children and young people in the “nezalezhnaya”! Not anymore, actually.

School history textbooks can cause if not an instant heart attack, then a heart attack in older people. Where else can you get information? Soviet movies? Prohibited. Books from the same period? "Cleaned" from the libraries in the most thorough way. The sale of Russian is prohibited. Yes, there is a free Internet, there are editions of normal authors delivered to the book markets by the most real smuggling. That's just the big question - will those who will soon determine the future of Ukraine reach out to them? Will they even want to get acquainted with a point of view that is alternative to the one that day and night will be hammered into their brains and souls by teachers, TV channels, packs of other propagandists. Doubtful, you know. There are still enough of those in the country who are immune to nationalistic psychosis and who are trying their best to instill it in their children and students. However, their number, alas, is declining rapidly.

From the “thousand-year-old statehood” mixed up with hatred for the fraternal people to the “thousand-year-old Reich” is one step away. Should I wait until it's done?
Ctrl Enter
Noticed oshЫbku Highlight text and press. Ctrl + Enter
Reporterin Yandex News
Reporterin Yandex Zen
11 comments
Information
Dear reader, to leave comments on the publication, you must sign in.