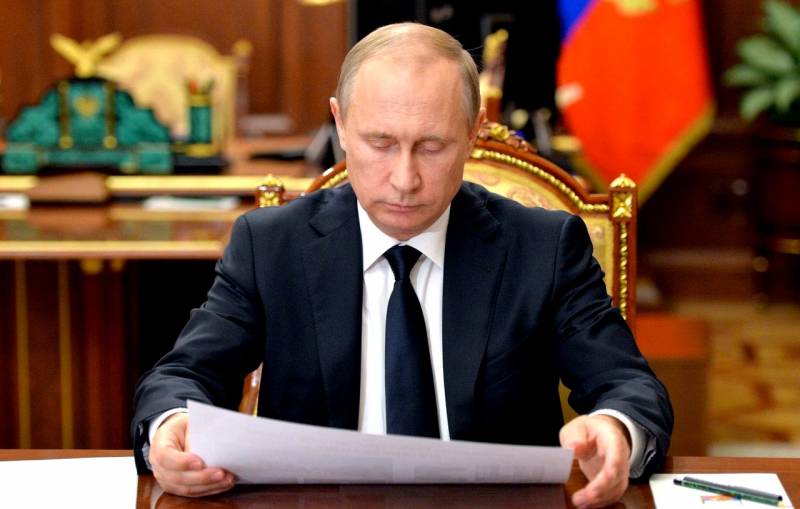 All sane people on both sides of the Ukrainian-Russian border did not have time to breathe a sigh of relief after the “fatal” date of February 16 had passed, and the events within the framework of the most acute stage of the Ukrainian crisis created by the West, as they say, broke the brakes. What's the matter? Indeed, contrary to the assurances of the British tabloid, the “cold sky over Kiev” was never torn apart by Russian missiles and combat aircraft. The troops are returning to their places of permanent deployment, the process of recognizing the republics of Donbass is clearly beginning to “slip”, risking turning into a hopeless enterprise. As they say, what more? What else needs to happen for the "collective West" to recognize its stories about the "imminent invasion" for what they really are - a stupid fiction, a lie, a fake?


Apparently, the main evidence - the complete absence of any aggressive actions on the part of Russia against the "nezalezhnaya" - is not enough for him. In addition, Kiev, strongly urged on from across the ocean, immediately began to do everything possible to completely nullify any possibility of reducing the degree of tension. Donbass exploded with shelling, and Vladimir Zelensky made a number of statements that leave no room for doubt about the intentions of the Ukrainian side regarding the implementation of the Minsk agreements. At first glance, all this looks as if the West and Ukraine, playing the role of its obedient puppet, are confidently playing the game, leaving Russia absolutely no room for maneuver and choice, imposing its own agenda and its own algorithm for the further development of the situation. But what if it isn't? Let's try to figure it out.

Everything goes according to plan?

To make such an assumption is based on quite certain actions of the Kremlin. And, above all, that they do not show the slightest signs of nervousness, haste and attempts to "keep up" with events. There is an obvious adherence to some very clearly calibrated and carefully worked out plan of action. At the same time, each next step is extremely difficult to calculate based on the previous one. On February 15, the State Duma calls on the president to recognize the independence of the DPR and LPR, which immediately causes an explosion of “righteous anger” both in Ukraine and in Washington and Brussels. However, on February 16, the withdrawal of Russian troops begins, which participated in the exercises in the territories of those regions where their presence terribly disturbed NATO headquarters and the editorial offices of British tabloids.

An unexpected "response" to these actions is a sharp escalation of armed confrontation on the "line of contact" separating Donbass. A more than expected reaction was immediately followed by statements from the West that there was no “de-escalation” at all, on the contrary, there was a “build-up of Russian military forces directed against Ukraine” and “intensification of their activity.” The US Embassy in Kiev unhesitatingly places the blame for the shelling of Stanytsia Luhanska (about which there are a huge number of questions) not even on “separatist forces”, but directly on our country, without hesitating to use expressions like “Russian shelling”, “monstrous violation of the Minsk agreements” and the like. At the same time, Volodymyr Zelensky, who has seized upon the next microphone, openly declares that these same agreements are “drawn up mediocrely” and they put “nezalezhnaya” in a “definitely losing position”.

Also, the clown president clearly and unequivocally says that he does not intend to conduct any direct negotiations with the DPR and LPR, with the exception of specific issues of the exchange of prisoners. That is, more than frank confessions are heard from Kiev in a categorical refusal to follow the path of "Minsk". The agreements there are trying to once again either “rewrite” or simply break them, in order to then seek the conclusion of new ones - obviously, “talented” and “profitable”. Against the backdrop of all this bacchanalia, Dmitry Peskov’s words that Russia’s recognition of the independence of the LDNR “certainly does not correlate with Minsk” sound not very inspiring. Some people have already hastened to declare these words “surrender of positions” and “refusal of recognition”. But I would not rush to conclusions. For some reason, everyone forgets that on the same day, February 16, the Investigative Committee of Russia opened a criminal case and began an investigation, the basis for which was the discovery in the Donbass of five mass graves of civilians, allegedly killed by Kiev punishers in 2014 . But this already smacks of the extremely unpleasant wording “genocide”, the very one that, it seems, it was no coincidence that Vladimir Vladimirovich sounded from the lips of Vladimir Vladimirovich the day before - and precisely in relation to the events in the Donbass.

Grounds for open intervention? Why not. If so, then it is prepared competently and thoughtfully. Well, to top it all off, Russia, instead of trying to convince the “collective West” of its own “innocence” and “non-involvement” in the next round of escalation in the East of Ukraine, on February 17 puts forward, in fact, a new ultimatum to it. This, of course, is about Moscow's official reaction to the "counter proposals" of the United States and NATO on security guarantees, published the day before. We will analyze this interesting document in more detail below. For now, I will only add to the list of unexpected steps taken by the Kremlin the expulsion from our country of Deputy US Ambassador Bart Gorman. What a twist!

Indeed, it is precisely such an association, willy-nilly, that arises. Especially - taking into account the KGB past of our president and his passion for martial arts. Let me remind you that the unique art of “swinging the pendulum”, which made them almost invulnerable and invincible opponents in fights with and without weapons, is attributed to the operatives of the legendary SMERSH. If we discard all sorts of fictional prettiness and obvious inventions, the essence of this technique is to perform not just multidirectional movements, but, more broadly speaking, unpredictable and non-standard actions that make for the enemy an assessment of a rapidly changing situation, if not impossible, then at least extremely difficult. And you know what? Against such an enemy as the Americans, who suffer from an incredible pattern of thinking and actions, as well as an increased tendency to act according to once and for all fixed schemes, it is precisely such tactics that should be most effective. Break the pattern, unsettle, make you nervous and, ultimately, force you to act in the way the enemy "programs" it. Perhaps the key to defeating the overseas "hegemons" lies precisely in this?

Let us return, however, from the fascinating topic of martial arts to the dull geopolitics. Although, it is quite difficult to call what is happening in this area today boring. The documents handed over by Moscow to Washington and Brussels, which are a continuation of the discussion on the topic of providing our country with effective security guarantees, can be described in any way, but not as compromise or, even more so, capitulatory. Russia does not abandon any of the points of its extremely tough position that are rather painful for the West, does not deviate from any of the "red lines".

Despite all the statements of our “sworn friends” about the “unacceptability” and “excessiveness” of the claims put forward by him, our country continues to stand firm on its own. The United States is still ordered to clear both Eastern and Central Europe of its troops, not to mention the Baltics. The North Atlantic Alliance, whether it likes it or not, must return to the balance of power of 1997. There can be no question of any acceptance of Ukraine into its ranks, not only in the short term, but in general in any future. Georgia also concerns, as well as all other "post-Soviet republics". All accusations regarding the "annexation of Crimea" and "unleashing a conflict in the East of Ukraine" are swept aside, in the harshest form. "Maidan" is called a coup d'état supported by the "collective West". The question of the status and ownership of the peninsula is "closed" and is not subject to discussion in any form.

Moscow accuses its opponents of not bothering to give a single constructive answer specifically to the fundamental, key points of its security proposals. Hypocritically talking about "readiness for dialogue", Washington and Brussels tried to "pull" from the fundamental and well-thought-out document only those points that they "liked" from the point of view that the West decided that negotiations on them would be comfortable and not burdensome. Moreover, according to Moscow, the unfortunate “negotiators” have made every effort to “twist” and distort even these points in such a way as to get more benefits and advantages for themselves if they are put into practice. In a word, they declared their readiness to consider the obverse without the reverse and the right without the left.

It is not surprising that after such a devastating characterization of the response she received, our country reminds the US and NATO of the "package nature" of their proposals. By this, it is more than transparently understood that it will still be necessary to fulfill them, whether willfully or not. And in the very, that neither is in full, and not "in pieces", and even exactly the opposite. Like it, don't like it, but you have to endure it. And handsome men, and beauties, and everyone else... Moreover, the emphasis is on the fact that such an approach simply forces Russia to take appropriate response measures. As specified for the very slow-witted - "military-technical nature."

What conclusion can be drawn from all this? First of all, the fact that all the desperate attempts of the “collective West” to reduce the process of global “reformatting” of our world initiated by Russia to a single “Ukrainian crisis”, and even to make our country the guilty party in such, cannot be called successful. Moscow is stubbornly returning its opponents to completely different levels of problems, threats and challenges. By the way, regarding the continuously sounding demands for “de-escalation” and “withdrawal of troops from the Ukrainian border”, the answer was also given quite clearly: “This is our personal matter, our sovereign territories, and we do not intend to discuss our actions on them with anyone. You can not set ultimatums regarding the “toughening of sanctions” - it will not work.”

Moscow categorically insists on the fulfillment of its key requirements, reserving the right to the most stringent retaliatory actions in case of further attempts to apply any "educational measures" against it. Apparently, before us - the beginning of a new round of combat. The "pendulum" will swing more than once, giving the West surprises that are not at all pleasant for it.
Ctrl Enter
Noticed oshЫbku Highlight text and press. Ctrl + Enter
Reporterin Yandex News
Reporterin Yandex Zen
50 comments
Information
Dear reader, to leave comments on the publication, you must sign in.