"NATO did not bomb, but fed the Russians." The American operation "Give Hope" as a sad episode in the history of the Russian Federation 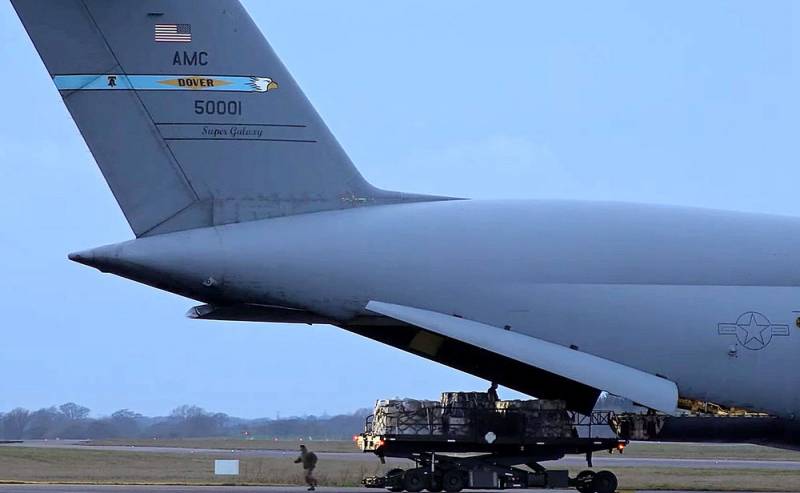 February 10 marks exactly 30 years since the start of the US Air Force operation, whose name translates into Russian as "Give hope." On this day, a dozen Lockheed C-5 Galaxy and Lockheed C-141 Starlifters loaded to the eyeballs took off from American military bases in Turkey and Germany. They set a course for the cities of Russia and the capitals of the former Soviet republics of the CIS countries. At the same time, the "sides" that went to Moscow, St. Petersburg, Kiev, Chisinau, Minsk, Yerevan, Baku, Ashgabat, Dushanbe, Alma-Ata, Bishkek and Tashkent were packed with paratroopers who were not armed to the teeth. And certainly not bombs. All of them carried food and medicines, carrying out the "delivery of humanitarian aid." Assistance to the population of a once great power that has gone only a few months ago into the past precisely through the efforts of the United States and its allies.


This episode of our history is rarely remembered today. If anyone likes to talk about him - and even with the traditional aspiration, tear and breakdown in a voice that breaks and trembles with pathos, it is the gentlemen of the domestic liberals. Such an audience with great pleasure "pokes its nose" fellow citizens in their "black ingratitude" and "zombie propaganda." Here, they say, NATO did not bomb in the 90s, but fed Russia! Worthless - transatlantic benefactors tore off from themselves, gave you, you understand, both this and that, saved from severe hunger and immersion in a primitive state, and you! And now you vilify them in every possible way, put forward some claims, put ultimatums. Yes, where would we all be without “great and holy America”, without her, one might say, maternal care and guardianship ?! Arguing with the half-witted adherents of this totalitarian and extremely tenacious sect is a thankless task. Because, as a rule, they use as their main argument throwing a banana peel at an opponent... And yet, I'll take a chance. Three decades later, we simply have to figure out what Provide Hope really was and whether we should be thankful to its initiators.

Picnic on the rubble

Abundant lisping about "the invaluable humanitarian aid of the West in the 90s" is usually published by the same characters who, with an enthusiastic air, rant about Lend-Lease (without him we would not have defeated Hitler!) And even ... US food aid in 20s of the last century. The last one is a masterpiece. But is it okay that at that time the Americans first carried out an armed intervention against Soviet Russia, and subsequently pushed through the introduction of the most severe trade embargo against it through the Entente? And in the 30s, through the application of "anti-dumping laws", they reduced all the export possibilities of the USSR to the export of grain from the country, which became the main cause of famines in the country? Regarding Lend-Lease, its true value and essence, I have already spoken out more than once, I will not repeat myself.

Let's go back mentally to the 90s. First of all, we should not forget that the "happiness" that "fell" on Russia and other former republics of the USSR was based on the well-known principle: "Toby, nebozhe, what is worthless to me." The very foodstuffs and medicines that were brought to us by the "boards" of the Pentagon, in fact, were simply its illiquid assets. The thing was that for the Gulf War they unleashed in 1991, the Americans, who at that time did not yet feel like the rulers of the world and were largely guided by the Vietnamese experience, which was extremely sad for them, were seriously preparing. No one could have imagined that the XNUMX-strong army of Saddam Hussein would turn out to be so incapable of combat that it would roll out of Kuwait, which it had previously captured with lightning speed, in just four days! And all the huge reserves stockpiled by the army in case the Iraqis had to be dealt with seriously and long enough turned out to be, in fact, completely unclaimed.

Funds for their acquisition have already been spent on the relevant items of the military budget, mastered and written off. And what was to be done with these mountains of “dry rations”, cereals, canned food and other things? To drag back across the ocean, spending a lot of money first on this logistics operation, and then also on the storage or disposal of products that no one needed at that time? The then head of the White House, George W. Bush, came up with a much more elegant and winning move. He signed the FREEDOM Support Act, which launched the global “economic development” (that is, enslavement) of the entire “post-Soviet space”. Prior to that, in January 1992, a special International Coordination Conference was held in Washington, where the “white gentlemen” decided how to equip the life of the newly acquired colonies and came to the conclusion that the natives should be little by little fed. To not get upset. It was after this that Provide Hope launched in February of that year. The peoples of the Soviet Union destroyed by the forces of the “collective West” should have been clearly and unambiguously made clear who owns the hand that feeds them, biting which is fraught. And at the same time, to demonstrate a beautiful and tasty overseas gingerbread, which only good, “correct” natives will be able to count on from now on.

Yes, in the process of "providing humanitarian aid" (for the period up to 1997) 24 flights were carried out, which delivered XNUMX tons of cargo to the countries of the "post-Soviet space". But no matter how much money was spent on it, they paid off in full. After all, war is not cheap, gentlemen. And there is not the slightest doubt that Provide Hope was precisely a carefully crafted propaganda and psychological special operation in the war that was still being waged against our country.

And the point here is not only that it was carried out by the forces of the US military department - in addition to the Pentagon, the State Department also participated there, where without it. It was not for nothing that its then head James Baker, speaking at the US Air Force base located near Frankfurt, from which the first "sides" of Provide Hope were to rise into the sky, outlined its goals and objectives with the utmost frankness. During a ceremony staged with incredible, truly American pathos and pomp, the Secretary of State said the following: "This is not charity, but an investment in the security of the West and the whole world and stability for decades to come." Some of the domestic liberal party today continues, drooling pink, repeating that "American planes saved the Russians from starvation." Have mercy! In those days, if hunger threatened our compatriots, then nothing from the emptiness of store shelves and food warehouses. After the “liberalization” of prices, they were bursting with abundance, it is not clear (or rather, it is very clear) where it went exactly before the start of the “market reforms”. That's just money for pickles, or rather, for normal nutrition as such, the people deprived of normal work and decent income no longer had.

To "save" it was necessary not to drag expired American products into the country, which were supposed to show yesterday's "scoops" that fabulously popular "sweet life of the West", for which the superpower was allegedly destroyed, but to save the economy. Do not let the industry, agriculture, infrastructure collapse. Protect science and education. In a word, to do everything that categorically contradicted the plans and goals of our overseas "benefactors", who in exchange for miserable handouts received solutions to their global geopolitical and economic problems for decades to come.

Did they save us from hunger? Would you like to get acquainted with the data from the official "State report on the state of health of the population of the Russian Federation in 1992"? It said this: “In 1992, there was a significant deterioration in the quality of nutrition of the inhabitants of Russia. The purchase of fish by the population amounted to 30% of the 1987 level, meat and poultry, cheese, sugar - 50-53%. Forced breakdown of the diet that has developed in previous years, which inevitably affects the health of the Russian population and, first of all, pregnant, nursing mothers and children ... As a result of the reforms, there was a sharp stratification of the Russian population by type of nutrition - not only in quality, but also in respect. The impoverished part of the population began to consume less of almost all products - mass malnutrition arose here.” Here's the truth about the 90s - without slobbering enthusiasm about the "humanitarian aid", which, by the way, for the most part, no one got for nothing. They plundered and resold it truly on a massive scale.

And here's something else. Leave the tales about the “hungry scoop” and, again, the “total food shortage”, gentlemen, liberals, either as crazy as you, or for those who did not live in those years and have the stupidity to judge them solely on your fabulous tales. I will give even more eloquent data: according to real statistics, in 1989, when the country was already being finished off with might and main by Gorbachev's "perestroika", milk and dairy products were consumed on average in the USSR 363 kilograms per person per year. At the same time in the USA - 263 kilograms. Sugar, respectively - 42.5 kilograms in the USSR and 28 kilograms in the USA per year. So who and where "malnourished"?! Oh, well, yes - after all, there were no “hundred varieties of sausage” in our stores, unlike Western ones. But the one that was available was affordable for anyone - a worker, an engineer, a student and a pensioner.

In this situation, there is another extremely interesting and important detail. According to the results of a sociological survey conducted at the same time, 44% of the citizens of the USSR said that they did not consume enough milk! With sugar, the situation was even worse - life seemed "unsweetened" to 52% of respondents. They all terribly wanted "food abundance, as in the West." Well, so they got it - in 1992, in the form of decommissioned "dry stocks" of American warriors and "Bush legs". I cited this example not only as proof of how powerful the "perestroika" total "brainwashing" was. This information will be very useful for the assimilation of those who are now also terribly lacking something. Jamon with parmesan, for example. Firstly, in the new "humanitarian" cargo, which the West will send with great pleasure to Russia, if it, God forbid, returns to the "dashing 90s" again, they will definitely not be. And secondly, before that, planes with cargo of a completely different kind will depart from NATO bases to our country.

The times when our country, on its knees, was forced, by the grace of traitors and Western mercenaries, to accept miserable crumbs from the sleek hands of the enemy, will forever remain our pain and heavy shame. We are not given the chance to rewrite even the most shameful pages of history. However, it is in our power to make sure that they never happen again.
Ctrl Enter
Noticed oshЫbku Highlight text and press. Ctrl + Enter
Reporterin Yandex News
Reporterin Yandex Zen
17 comments
Information
Dear reader, to leave comments on the publication, you must sign in.