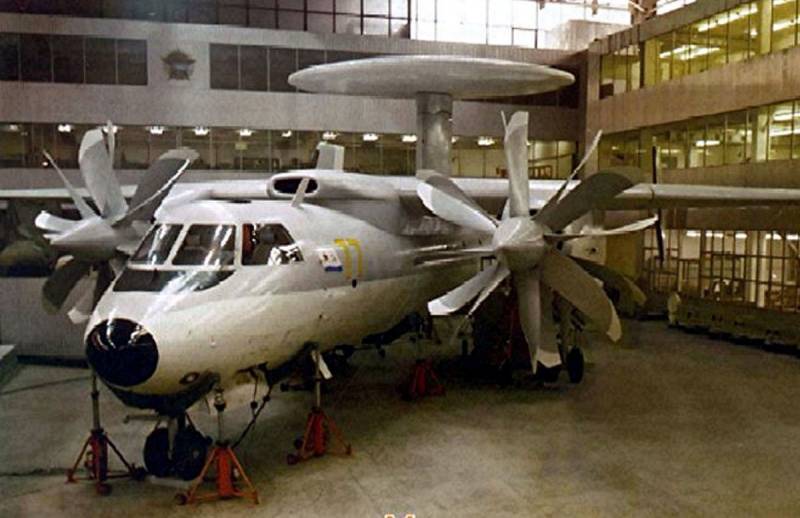 The day before, the first flight with the radar turned on was made by the promising Russian AWACS A-100 Premier aircraft. The event is very important and long-awaited. It is assumed that our "flying eye" will even surpass its American counterpart, the AWACS Boeing E-3B Sentry aircraft. However, upon careful study of the issue, it turns out that everything is not as rosy as we would like.


Why do we need AWACS or AWACS aircraft, which we have repeatedly mentioned in the context of the problems of the Russian Navy and its Naval Aviation? These are air-based electronic reconnaissance and control systems designed to detect enemy targets in the air, on water and on land, target designation and targeting of weapons of destruction or interception, as well as coordination of actions. Exclusively in modern combat, a useful thing that gives a lot of advantages over the enemy. Grumman E-2 Hawkeye AWACS carrier-based aircraft, coupled with fighter aircraft, allow the American AUG to control the widest ocean expanses. However, now we are talking not only about the fleet.

To understand the scale of the problem, it is necessary to give a few figures. The US Air Force is armed with 33 Boeing E-3B Sentry AWACS aircraft, the British Air Force has 7 Boeing E-3B Sentry, the French Air Force - 4. Plus, 17 AWACS aircraft of this type report directly to the command of the NATO bloc. In total - 61 "flying radar", performing the functions of reconnaissance, target designation and coordination, which objectively gives the North Atlantic Alliance a strong advantage over Russia.

Now let's see what the RF Ministry of Defense has here and now. These are 2 outdated Soviet-made A-50 aircraft and, according to some reports, 7 aircraft that have been upgraded to the A-50U level. This made it possible to increase its performance characteristics, but they are still inferior to the American Boeing E-3B Sentry, and the physical aging of the carrier aircraft itself, the life of which cannot be extended indefinitely, is a big problem. Plus 1 experimental A-100 Premier. The minimum requirements of the Russian Aerospace Forces for AWACS aircraft are estimated at 15 pieces, optimally - at least 40. Is it possible to solve this problem in a reasonable time?

Our "great white hope" is the A-100 Premier. It was created on the basis of the updated Il-76MD-90A military aircraft with the PS-90A-76 engine, which will allow it to serve for many decades. A dual-band locator equipped with an active phased antenna array and special radio equipment allow it to solve a number of tasks that are most important for the RF Ministry of Defense:

At first, to detect and conduct simultaneously up to 300 targets in the air, on water and on land, to carry out target designation on them.

Secondly, receive information both from its radar and from space satellites, acting as an air headquarters.

Thirdly, to carry out effective electronic warfare with the enemy.

Finally, lead the control of unmanned aerial vehicles. Yes, a very useful aircraft, without its AWACS today you are nowhere, neither on land nor at sea.

That's just the entry of "Premier" into the troops is continuously delayed. First it was about 2016, now about 2024. And it's not certain that it will.

Judging by the available information, the project was crippled by Western sanctions. Problems arose with the component base, namely, with the transition from imported to domestic microchips. Anyhow, which ones are not suitable here, in order to comply with the declared performance characteristics, the equipment must use GaN gallium nitride transistors, but now you can’t buy them for petrodollars just like that. Import substitution of electronics is a complex and long process. Another problem of updating the fleet of AWACS aircraft is the lack of their carriers. Il-76MD-90A should be used as them, but Aviastar-SP JSC so far produces only a few of them a year, and after all, Ils are needed as ordinary transport workers too.

In the bottom line, it turns out that in some reasonable time we will not be able to acquire a large number of A-100s. "Premier" in the end, of course, will be finished, but it will be an expensive and rather rare "beast". And what then to do?

Here it is worth looking at opponents who widely and actively use the Grumman E-2 Hawkeye carrier-based AWACS aircraft. Yes, in terms of its performance characteristics, it is somewhat inferior to the Boeing E-3B Sentry, but it allows you to see enemy aircraft at a distance of up to 540 kilometers and cruise missiles - up to 260 kilometers, direct your fighters at a target, and control air combat. In the US Navy and France, the E-2 Hawkeye is based on aircraft carriers, giving the AUG a huge advantage over everyone. A total of 200 carrier-based AWACS units were produced, a more advanced version of the E-2D is currently being developed.

Why might we be interested in this? Yes, because the E-2 Hawkeye is actively used not only in the American, French or Japanese fleet, but also in conventional land aviation. So, for example, the success of the Israeli Air Force in the war with Lebanon was largely due to the use of AWACS aircraft E-2C. They circled at a safe distance under the cover of fighter aircraft, controlled the entire enemy airspace in general, and gave target designation to IDF pilots, increasing their effectiveness.

Perhaps the best solution for the Russian aviation, army and navy would be the revival of the Soviet project of the carrier-based AWACS aircraft Yak-44. It is even visually clear that the E-2 Hawkeye was considered as a prototype, but it had an important advantage over its competitor. If an American plane was launched from the deck of an aircraft carrier exclusively with the help of a catapult, then the Soviet Yak-44E could even take off from a springboard. Despite the fact that it was designed for the Ulyanovsk ATAVKR, it could even be used with the Admiral Kuznetsov TAVKR, however, taking off partially underloaded with fuel. However, this problem can be solved by refueling in the air. By the way, last year the Americans successfully tested the refueling of their E-2D Advanced Hawkeye using the MQ-25 Stingray carrier-based tanker drone.

Despite the fact that work on the Yak-44 project was suspended, the aircraft still has not lost its relevance. It was originally created for both deck and conventional land-based. Compact and cheaper, compared to the A-100, AWACS aircraft based on the Yak-44 could occupy a wide niche both in the base and in the Naval Aviation of the Russian Navy, complementing the more powerful and expensive Premieres. Unification will only simplify and reduce the cost of their production.
Ctrl Enter
Noticed oshЫbku Highlight text and press. Ctrl + Enter
Reporterin Yandex News
Reporterin Yandex Zen
13 comments
Information
Dear reader, to leave comments on the publication, you must sign in.