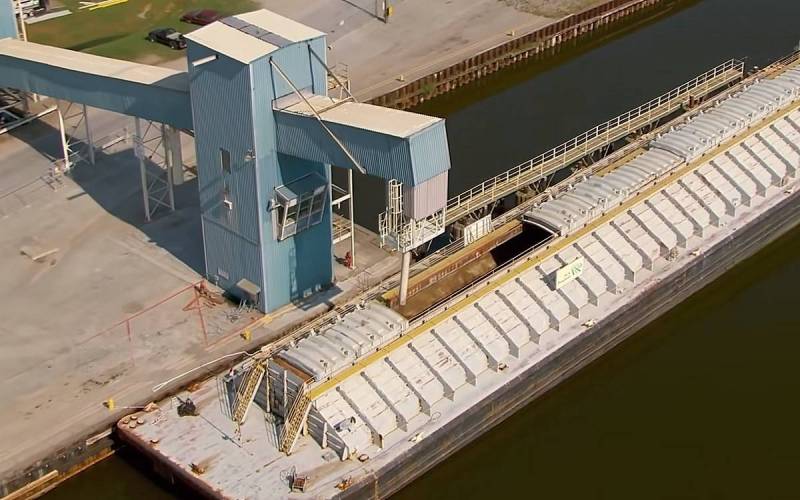 A week ago, Vilnius declared a real sanctions war against Minsk and set up a transport blockade. In pursuance of Western sanctions against the backbone enterprise Belaruskali, the transit of fertilizers through Lithuanian railways and ports is now closed to it. These, it would seem, small-town showdowns between two not the most significant states will have very serious consequences for the whole world.


Belaruskali still controls about 20% of the global potash fertilizer market. The contribution of this enterprise to the country's GDP is at least 4%. Fertilizers, the resale of Russian oil and the export of Belarusian oil products are the three pillars on which the budget of the Republic of Belarus stands, or rather, its foreign exchange earnings. If oil and its refined products traditionally went to neighboring countries of the European Union, then potash fertilizers, which are also sold by Minsk at a decent discount, are in demand all over the world.

The main problem of Belarus is the lack of its own access to the sea. From Soviet times to the present day, the export of its products has been tied to transit through neighboring Lithuania. Up to a third of the revenue of the port of Klaipeda came from the transshipment of potash and other fertilizers, as well as products of the Belarusian oil industry. Earlier, Moscow has repeatedly offered Minsk to diversify risks through the use of Russian ports in the Baltic. "Old Man" agreed in words, but in fact deftly evaded deepening economic cooperation with Russia. The official version is that the logistics route through our country is getting longer, and there are no necessary port capacities. The unofficial hints that Minsk was not interested in the inquisitive Russian customs officers seeing the entire range of Belarusian exports and their true volumes.

This "multi-vector" policy has already given negative results. First, there were problems with the transit of oil products through the Baltic States, which nevertheless forced the Belarusian leadership to transfer a fair share of exports to our ports. Now the "long arm" of the West has reached potash fertilizers. Since February 1, official Vilnius has banned the transit of Belarusian fertilizers through its territory. The representative of the Lithuanian railway department, Laura Gabrilavichiute, stated the following on this occasion:

The last trains with fertilizers entered Lithuania on Monday. On Tuesday, transit was suspended by government decision.
This overtly political decision by the small Baltic country will have very far-reaching consequences.

At first, Minsk immediately tried to find an alternative route through Ukraine, but did not succeed. The owners of terminals in Ukrainian ports at first expressed their desire, but then it quickly disappeared, which was directly confirmed by President Lukashenko:

Now the problem has arisen with Belarusian potassium chloride. And not because it is potash fertilizers, but because it is 11-12 million tons. This is a huge mass that needs to be moved. This is the problem. The Ukrainians proposed, we agreed. Today, it seems, they said that no, we will not ship in Odessa. That is, they were also stopped.
Obviously very offended by both Vilnius and Kiev, Alexander Grigoryevich on February 7 introduced a ban on the transit through his territory of chemical and mineral potash fertilizers, and most importantly, oil products from Lithuania to Ukraine. This is very serious for Nezalezhnaya, since the share of Lithuanian diesel fuel in its market is 9%, gasoline - 11%.

That is, on the eve of a hypothetical war with Russia, a tenth of motor fuel for the needs of the Armed Forces of Ukraine and the Ukrainian economics failed.

Secondly, having finally lost other alternatives, Minsk will have to completely “lie down” in the matter of transit and export to Moscow. Belarus has nowhere to go from Russia, which will undoubtedly contribute to further economic and political integration of the two countries within the framework of the Union State.

Thirdly, the unwillingness of Russian ports to accept such large volumes of Belarusian transit at once will objectively lead to a drop in export volumes, and hence foreign exchange earnings. If Minsk had listened to the Kremlin in a timely manner, then it would not have had such a problem. But it will not only be local Belarusian-Lithuanian mutual difficulties.

The loss of significant volumes of potash fertilizers from the market will immediately lead to a shortage and an increase in prices. The Canadian company Nutrien, a competitor of Belaruskali, has already announced an increase in the selling price for its products. Others will follow it, including our Uralkali. Of course, one could be happy for them, but do not rush.

Rising prices for fertilizers will automatically lead to higher food prices around the world. Against the backdrop of expensive energy resources, this could lead to destabilization of the situation in many Third World countries. Recall that the "Arab Spring" was preceded by a significant increase in food prices.

Such is the "domino effect" is obtained. All because of some sort of Lithuania.
Ctrl Enter
Noticed oshЫbku Highlight text and press. Ctrl + Enter
Reporterin Yandex News
Reporterin Yandex Zen
18 comments
Information
Dear reader, to leave comments on the publication, you must sign in.