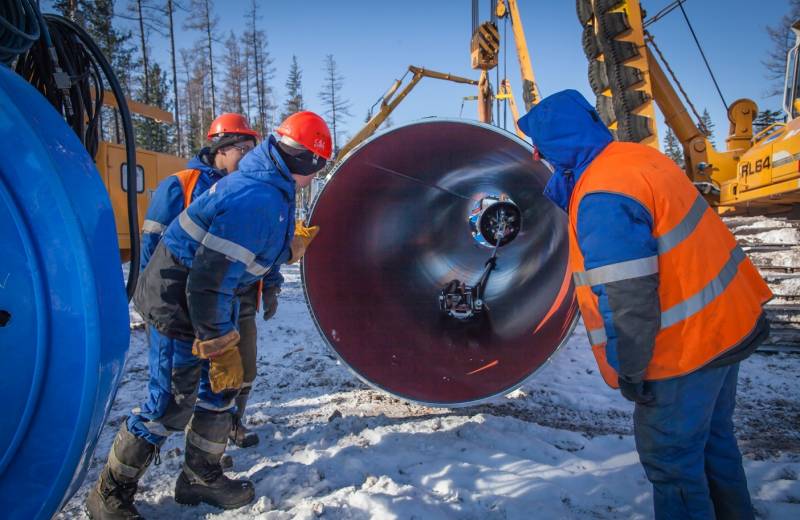 The day before, the entire “enlightened” world was literally “shocked” by photographs of Russian President Putin crouching at the Beijing Olympics, who flew to the Chinese capital to support our athletes. Apparently, Vladimir Vladimirovich was exhausted by difficult negotiations on the future of promising main gas pipelines in the PRC. Instead of the Power of Siberia-2, the green light was given to the MGP Power of Siberia-3, about which almost nothing is known to the general public. What kind of gas pipeline is this, and why are the Chinese more interested in Sakhalin gas than Yamal gas?

In all these "Forces of Siberia" it is already possible to get confused. The Power of Siberia-1 was launched in 2019, and up to 38 billion cubic meters of gas should be pumped through this pipeline from the East Siberian fields of Russia to China per year. The capacity of the main pipeline (MGP) is gradually increasing. The exact price of the export agreement is still a trade secret. By the way, the 30-year gas supply contract between Gazprom and China's CNPC was signed in the "Olympic" year 2014 after President Putin's personal visit to Beijing. Apparently, something similar was expected from the 2022 Olympics in Beijing via the second pipeline.

Power of Siberia-2 plans to annually pump up to 50 billion cubic meters of gas to the PRC. The fundamental difference from the "Power of Siberia-1" is that the MGP will use the deposits of Western Siberia, that is, those from which European consumers are supplied. Thus, Moscow clearly expects to diversify the sources of foreign exchange earnings by finding alternative markets. Gazprom is actively technical rationale for this ambitious project.

Alas, during the personal visit of Vladimir Vladimirovich to Beijing, it was not possible to repeat the triumphant success of 8 years ago. The main "plug" is still the price that the Chinese comrades are willing to pay for Russian gas. The agreement on the "Power of Siberia-2" at the meeting between Putin and Xi Jinping was never signed, but something else was born instead.

A breakthrough happened on the next IHL, about which few people have heard of us, on the "Power of Siberia-3". What kind of gas pipeline is this?

"Power of the Far East"

Probably, it would be more correct to call it that way, since the gas pipeline has a rather indirect relationship to Siberia. The gas pipeline's capacity should be 10 billion cubic meters of gas per year, and the Sakhalin-3 project will be used as its resource base. It has its undoubted advantages, which attracted Beijing, and very significant shortcomings.

The advantages of the "Power of Siberia-3" include the fact that its logistical shoulder is incomparably shorter than that of fellow "Siberians", while a significant part of the infrastructure for it has already been built. This is the main pipeline "Sakhalin - Khabarovsk - Vladivostok", created to supply Sakhalin gas to the Russian Primorye. It will be necessary to expand the capacities of the MGP, build a second gas compressor station and an additional branch through Khabarovsk and Blagoveshchensk, where it will connect with Power of Siberia-1. The route is understandable and logical, at the same time it will allow, in which case, to diversify the risks for the first "Siberian" project, if rumors about problems with its resource base turn out to be true. At the same time, Russian cities of the Far East will be supplied with gas, which, in any case, can only be welcomed.

The disadvantages of the "Force of Siberia-3" include its resource base. Yes, it is well explored and will meet the needs of not only Russian, but also Chinese consumers. The problem is that its development is under targeted US sanctions.

This is the Yuzhno-Kirinskoye gas condensate field, located on the Sakhalin sea shelf at a depth of 91 meters. Gas reserves in it are estimated at 814,5 billion cubic meters, gas condensate - at 130 million tons. Subsea production requires special equipment, but in 2015 the United States imposed sanctions on its sale and subsequent service in Russia.

Gazprom has decided to develop its own subsea production complex (SPC). The enterprises of the military-industrial complex "Almaz-Antey" and "Malachite" were involved in this task. It is not yet known whether it was possible to completely replace the equipment with imports, or whether Gazprom changed the production scheme itself. Perhaps, it turned out to bypass the sanctions to negotiate with alternative suppliers.

Interesting fact. The pipe-laying vessel Akademik Chersky will have to take part in the development of this underwater field. This old acquaintance of ours was once plucked from the Far East and led to the Baltic bypassing Africa to complete the construction of Nord Stream 2. It seems that even managed to do without it. Now the "Akademik" is rushing at full steam from the Baltic Sea back to take part in the "Power of Siberia-3" project.
Ctrl Enter
Noticed oshЫbku Highlight text and press. Ctrl + Enter
Reporterin Yandex News
Reporterin Yandex Zen
26 comments
Information
Dear reader, to leave comments on the publication, you must sign in.