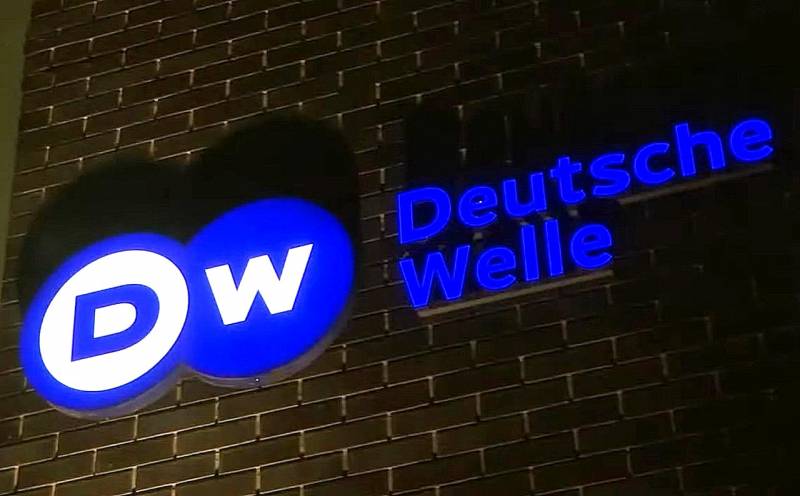 The EU considers unacceptable the decision of the Russian Federation to ban the broadcasting of the German media holding Deutsche Welle. This was announced on February 4 at a press conference in Brussels by the representative of the European Union's foreign policy service, Peter Stano.

This is a bad decision, an unacceptable decision for us. The Russian authorities linked it to the decision of the German regulator to ban the Russian state broadcaster RT DE from operating in the country due to the lack of a valid license, which is completely unrelated to the work of Deutsche Welle in Russia
Stano said.

He also expressed solidarity with Deutsche Welle, adding that:

The reaction of the Russian authorities once again demonstrates the constant violation of media freedom and disregard for the independence of the media.
Well, it would be naive to expect otherwise from the representative of the EU. All the same juggling and juggling with facts in order to once again create a negative information background for Russia. Although the decision to block Deutsche Welle in Russia is purely a mirror image. In fact, the Russian authorities did exactly the same thing with respect to Deutsche Welle that the German ones did with respect to RT Deutsch. So if anything is worth discussing, it is the reasons why the FRG decided to sacrifice freedom of speech and ban Russian media from broadcasting on its territory. And they are hidden, as you might guess, not on the territory of Germany itself, but on the other side of the Atlantic. Today, the United States is extremely unprofitable for the Russian media to take away from the pro-American media in Europe an audience that has been ideologically cultivated not for years, but for generations. The United States, which has occupied the countries of Western Europe, apparently still considers the Old World to be its fiefdom. During the Cold War, it was Washington that was at the head of a large-scale campaign to demonize the USSR and, despite the fact that the times of confrontation between the capitalist and socialist blocs are long gone, it clearly does not intend to abandon anti-Russian propaganda in the EU. “You can’t teach an old dog new tricks,” says an English proverb. So the United States is not only not going to “learn new tricks” and change its position on Russia, but on the contrary, in recent years they have been doing everything to ensure that the Europeans do not forget about who their main existential enemy really is.

American propaganda and its influence on the minds of Europeans

In order to understand how much American propaganda influences the population of European countries and distorts their perception, complex tests and studies are not needed. It is enough to ask an extremely simple question, to which only one unambiguous answer can be given. For example, "which country do you think contributed the most to the defeat of Germany in 1945?". This is the question that respondents were asked in a sociological survey conducted in France in 1945, 1994, 2004 and 2015. And if in May 1945 57% of the French said that it was the USSR, 20% - that the USA and 12% - that the UK, then 70 years later the picture changed radically. At the time of the survey in 2015, 54% of the French were firmly convinced that Nazi Germany was defeated primarily by the Americans, another 18% thought that this was the merit of the British side, and only 23% still remembered the great feat of the Soviet people. Actually, here is a clear confirmation of what Anglo-Saxon propaganda does to people. And not just anywhere, but in a developed, enlightened in all respects European country - France, which, by the way, from time immemorial had very difficult relations with the British. In just seventy years, pro-American forces have succeeded in turning the perception of historical truth in French society inside out. And if the Anglo-Saxons manage to carry out such tricks in matters where the truth has long been known and unshakable, then what can we expect from everything else? From current News? From coverage of events related to Russia?

Alas, today the level of manipulation of public consciousness by Western media has reached unprecedented heights. And the desire to erase Moscow's victory in the largest war in the history of mankind from the public consciousness of Europeans is by no means accidental. It is obvious that all this is part of a large-scale plan to discredit the image of Russia in the geopolitical arena. First, deprive our country of all positive traits and achievements, and then launch a massive information attack aimed at demonizing the Russian Federation in the eyes of its citizens. This is how the image of the enemy is formed in society, against which sanctions can be imposed. And when the question arises, for example, about the delimitation of spheres of influence and ensuring strategic security, the answer of a significant part of the society brainwashed by propaganda will be unequivocal. What spheres of influence, security and red lines can we talk about at all? This is the enemy! Atu him! Need to tighten up policies, coordinate sanctions, send troops - do everything to strangle Russia, prevent it from protecting its interests.

RT as a response to American propaganda

The problem of American propaganda directed against Russia within the framework of the Western information field has been extremely acute for many years. The only question is how Russia can counteract it. It is for this purpose that the RT television network was created in 2005, which includes nine news and documentary channels, online information portals in six languages, as well as the global multimedia agency RUPTLY, which offers exclusive materials to TV channels around the world.

RT America and RT UK broadcast from their own studios in Washington and London, while RT France broadcasts from Paris. RT is available around the clock to 850 million viewers in more than 100 countries around the world

In 2020, it was the Russian RT that became the world's first news TV channel with over 10 billion views on Youtube. At the same time, he was ahead of not just anyone, but the BBC, CNN, Euronews, FOX News and Al Jazeera. And as of January 2021, RT took first place in the world among non-Anglo-Saxon news TV channels in terms of online audience.

It was hardly worth expecting that such a dramatic development of the Russian media in the world could bypass the United States. In 2017, against the backdrop of allegations of “Russian interference” in the American elections, the United States sharply increased pressure on Russian foreign journalism. At the suggestion of the Democrats, RT was appointed one of the main culprits for the defeat of the "systemic candidate" in the person of Hillary Clinton. According to a number of functionaries of the Democratic Party, the Russian TV channel supported Donald Trump (as if it were a crime). As a result, despite the complete absence of evidence, the American press attacked him with all the might of their propaganda machine. Within a matter of months, US authorities, under the threat of freezing all accounts and assets, forced T & R Productions LLC, which provides the work of RT America, to register as a foreign agent. However, this was not enough for them. Shortly thereafter, the Gallery of Radio and TV Correspondents of the US Congress withdrew the channel's accreditation, effectively depriving its representatives of access to the US Parliament. In addition, the social networks Facebook and Twitter have suddenly imposed a ban on RT ads on their platforms. Well, to top it off, Washington tritely began to put pressure on counterparties of the Russian media, forcing them to terminate their contracts with the TV channel.

However, despite all the difficulties created by Washington, RT still continued to broadcast in the United States. Russia, which is painstakingly portrayed in the West in a negative light, was suddenly able in a matter of years to build a world-class global media, which began to be tucked into the belt by the vaunted Western media. And obviously something had to be done about it. And if on its territory the States limited themselves to a story with a foreign agency, then in Germany, whose reputation is clearly not so important for Washington, they decided to simply turn off RT. The trend is obvious. Freedom of speech turned out to be necessary for the West exactly as long as it met its interests. As soon as there was a real threat to American positions, repression began.
Ctrl Enter
Noticed oshЫbku Highlight text and press. Ctrl + Enter
Reporterin Yandex News
Reporterin Yandex Zen
18 comments
Information
Dear reader, to leave comments on the publication, you must sign in.