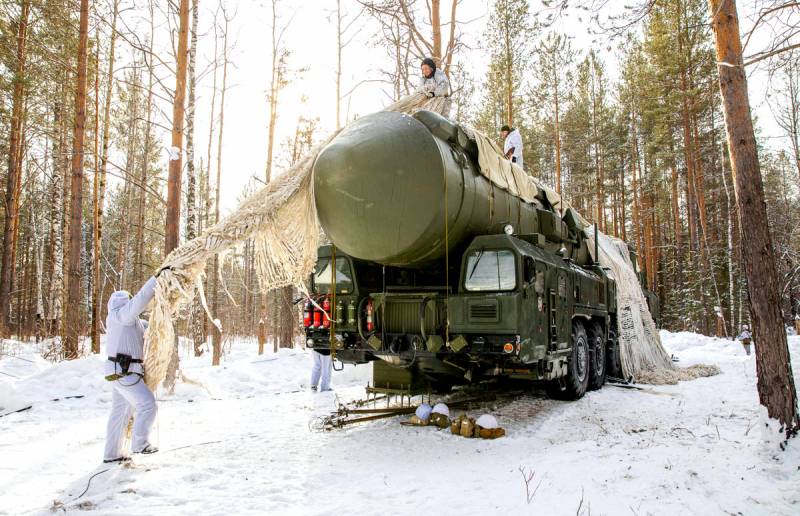 The details of the documents that representatives of the United States and the North Atlantic Alliance handed over to Moscow as their official response to its demands for effective security guarantees remained information "closed" to the general public for some time. However, the fact that there is absolutely nothing in them that can inspire at least some optimism, and, most importantly, hope for a further fruitful dialogue, was clear from the outset. And not only according to, let's say, a very unambiguous and characteristic reaction of the "first persons" of our state, but also based on the further actions of the "collective West", the rhetoric of its main speakers. The last hopes were dispelled on February 1 personally by Vladimir Putin.


During a press conference that took place in the Kremlin after his talks with Hungarian Prime Minister Viktor Orban, the president bluntly and frankly stated that opponents "ignored" all the most significant points that "cause fundamental concern" of our country. According to Vladimir Vladimirovich, the West firmly intends to "strengthen its security at the expense of others." This is, in principle, an exhaustive characteristic. Nevertheless, on February 2, the Spanish edition of El País published not only the most complete summary of the answers that so disappointed the domestic leader, but even copies of the relevant documents. Tellingly, neither in Brussels nor in Washington did they disown them, they did not come out with a refutation. Therefore, "what is written - to believe." Well, let's try to understand the essence of the position taken by our "sworn friends", and most importantly, to understand whether there is at least some rational grain for our country in it.

At first glance, our opponents are quite constructive. No one responds to Russia with a decisive refusal to implement any of the points proposed. It does not threaten with a declaration of war and other "punishments from heaven" for the "arrogance" shown. On the contrary, both the Americans and NATO are ready to “discuss”, “seek consensus” and even seem to agree to make some concessions. That's just ... One has only to carefully study all their "counter proposals", delving into their true essence, and it immediately becomes clear: they want to "throw" Russia corny. Every step that the United States and the Alliance "take towards" contains a catch, a "double bottom". Or - details that are a priori unacceptable for us. At the very least, they reduce to zero the whole positive meaning of possible agreements. Let's sort it out in order.

So, the United States, so be it, agrees to negotiate with our country "non-deployment of offensive missile weapons on the territory of Ukraine", and indeed "any military forces to perform combat missions." Success? Breakthrough? After all, our troops are not there anyway. Therefore, we restrict exclusively Americans. Do not rush to conclusions! Have you by any chance forgotten that Washington considers Crimea (and will consider it!) “Ukrainian territory”?! Our country, "behaved" for such a "grand gesture", will be forced to "sign" under the complete demilitarization of the peninsula! How will this step end in the end, I hope there is no need to explain? By the way, in the paragraph where exactly this proposal is stated, our overseas opponents continue to talk about the “concentration of Russian troops on the Ukrainian border” and demand their “withdrawal”. Where? Presumably, beyond the Urals and not closer. Will we do it too? This is just the first example. However, everything else is sustained in exactly the same vein.

The Americans are also ready to talk about short-range and medium-range missiles (exclusively in the ground-based version). Do you know what they offer as "guarantees" on this issue? “Confirm the absence of the Aegis missile defense system on launchers, the very ones deployed, for example, in Romania and Poland, “the absence of Tomahawk cruise missiles.” How to confirm?! Nuuuuu ... Confirm and that's it. Presumably - "the word of the gentlemen." About to remove at least from Eastern Europe the launchers themselves to hell - as we demand, there can even be no question. And even then, overseas “benefactors” are ready to promise Moscow three boxes about the “lack of Tomahawks” (which can subsequently appear there at any moment) only if our country “provides similar transparency measures at any two bases of ground-based missiles at Russian territory! What is characteristic - by their choice.

I am ready to put a gold piece against an empty matchbox - it will be about us withdrawing our missile divisions from, again, the Crimea and Kaliningrad. How do you like this "fair deal"? Does it buzz a little? No - from such proposals reeks a mile away with the most notorious swindle and outrageous arrogance. And, by the way, about the withdrawal of their own troops from Eastern Europe and bringing the state of NATO's presence in this region to the level of 1997 (as Russia demands), these swindlers refuse to even start talking. "We're not going anywhere!" The bases, arsenals, missile launch pads and everything else stuffed there by the Pentagon are proclaimed in the United States as "proportionate and strictly limited deployment of forces." In principle, this could already be the end, but there are still so many interesting things ahead!

Washington graciously deigns to "chat" about "limiting the risks of exercises in Europe." In particular, those in which there is a "nuclear component". There will be no talk of a complete rejection of such (in accordance with our proposals). Well, except perhaps a discussion of some kind of “new notification mode” about maneuvers and similar rubbish. But the tricksters from Washington really want to... expand the START-3 treaty. Have you already guessed, due to which articles? Right! They dream of reducing and banning "dual-use missiles" (that is, our entire "hypersound" in full force), as well as "new intercontinental systems for the delivery of nuclear weapons." O! This is clearly about Poseidon. He, too, is under the knife. In the final lines of this defiant and boorish response, the Americans remind that they intend to speak with Moscow only “after the de-escalation of the situation around Ukraine.” And, yes, by the way -policy the Alliance's open doors will remain unchanged."

In my opinion, the only thing missing from the document is a specific indication of the address where we can go on foot with our security proposals. However, the answer that the NATO representatives gave birth to gives rise to even more vivid emotions. And it is sustained, one might say, in a humorous way. That is, the clowns from Brussels begin it with ranting about "settlement of the situation around Ukraine." And - what a laugh! – “in accordance with the Minsk agreements”. Yes, yes, the very ones that Kiev flatly refuses to comply with. Well, then begins, as they say in certain circles, "complete trash." The North Atlantic Alliance demands from Moscow immediately (and moreover, immediately) "to withdraw its troops from Ukraine, Georgia and Moldova, where they, you see," were stationed without the consent of these countries.

That is, to put it simply, we are ordered to surrender Abkhazia, South Ossetia, Transnistria. Well, and, of course, the Donetsk and Lugansk People's Republics. So here it is - easily and without a fight. At the first snap of Brussels' fingers. Present in the document and other "Wishlist" - to match the above. For example, in no case should Russia create and test weapons systems "capable of destroying satellites." Well, of course, where is the brave soldiery of the Alliance good without GPS-navigation? And, again, to spy on our country in such harmful conditions as you command?

In addition to this, we are ordered to “return to the implementation of the provisions of the Treaty on the Limitation of Non-Nuclear Forces in Europe” (CFE), which Moscow sent far away, God forbid, in 2007. This mossy relic of the Cold War era was concluded in 1990 between the Warsaw Pact and NATO and was intended, as much as possible, to "cut off" the power of the Warsaw Pact in conventional weapons - tanks, artillery, combat aircraft and the like. The agreement, in fact, lost all meaning after the collapse of the USSR and the military bloc headed by it, whose members unanimously gave a rattle to the Alliance. And then NATO began to move closer to our borders - first crawling, and then skipping... That's why we left the CFE Treaty. And now the “wise men” from Brussels want to revive it, having received the right to demand from us the “reduction” of our Armed Forces, and in addition to control the movement of their units and subunits on Russian territory. Nothing more? Oh, yes - the Alliance is also eager to return its representative office to Moscow, from where it was put up not so long ago. Here's what we can do without!

The most interesting thing is that some "experts" and "political scientists", who, at first glance, seem to be loyal to our country, are already talking about the fact that the agenda proposed by the "collective West" can be considered as "a serious foreign policy step forward for Moscow ". Almost like her victory. But at the same time, it is deeply incomprehensible - what will this really be? In "guarantees of non-deployment of NATO strategic weapons near Russian borders"? So after all they are not present - these guarantees! There are only empty promises, for the mere receipt of which Russia will be forced to pay such a colossal military-strategic and geopolitical price that completely nullifies all hypothetical "benefits" from Western extremely slippery "peace proposals".

In essence, both responses - both the United States and NATO - can only be seen as outright insults. For you can only deal with something like this to someone who is considered a completely complete, incurable, clinical idiot. Well, either a coward and a weakling - which is no better for our collective pride. Vladimir Putin, who got acquainted with these “masterpieces” much earlier than the readers of El País and other media that reprinted it, is a hundred thousand times right in their assessment. We were ignored, Russia, let's call a spade a spade, we were simply denied the right to security. Of course, one cannot agree with this - now it remains only to convince our opponents of the fallacy of their position. By any means.
Ctrl Enter
Noticed oshЫbku Highlight text and press. Ctrl + Enter
Reporterin Yandex News
Reporterin Yandex Zen
43 comments
Information
Dear reader, to leave comments on the publication, you must sign in.