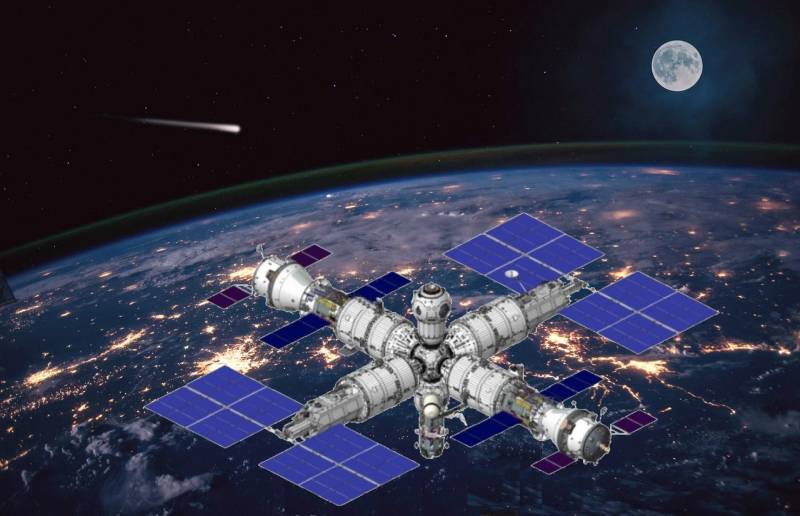 At the end of 2021, it became known about Washington's desire to extend the life of the International Space Station until 2030. Taking into account the fact that the United States is the largest sponsor of this project, the further future of the orbital depended on their position. But why should the Americans, who are actively promoting their own lunar orbital station, support the ISS, and how can this affect the prospects of our ROSS?

The foggy future of the ISS

The project involves 14 countries, this is perhaps the most significant and visible symbol of effective international cooperation. The problem lies in the aging of the station, the first segment of which was put into orbit back in 1998. Previously, the deadline for the life of the ISS was set to 2024. It is estimated that from 2025 the increase in the number of malfunctions at the station will become an avalanche, and the cost of repairs and subsequent maintenance will increase significantly. The possibility of extending the resource until 2028 was discussed, which was questionable due to the obvious unwillingness of the United States to shell out an alliance to implement its own American-centric project to build a circumlunar visited orbital station and the subsequent development of an earth satellite.

And on December 31, 2021, the White House made an unexpected gift to the entire world community by agreeing to extend the life of the ISS until 2030 with the following wording:

The International Space Station is a beacon of peaceful international scientific cooperation and has brought tremendous scientific, educational and technological achievements for the benefit of humanity. The continued involvement of the United States on the ISS will promote innovation and competitiveness, and advance the research and technology needed to send the first woman and first person of color to the Moon under NASA's Artemis program and pave the way for sending the first humans to Mars.
One can only rejoice for the first "colored person" and an emancipated American woman on the moon. But perhaps it's not just about protecting their rights?

Note that last year the Kremlin made a fundamental decision to withdraw from the ISS project and create a Russian orbital service station (ROSS). The decision is very important, since its implementation should return our country's own "gateway to space." What should she be?

From the technical side, the project looks quite rational, since it will use the modules that were previously supposed to be used when expanding the national segment in the ISS. These are the Scientific and Energy Module (NEM), the Universal Node Module (Prichal), the Base Module, as well as the Gateway and Transformable Modules. In the minimum configuration, there will be 5 of them, perhaps the number will grow to 7. The Russian service station will be visited, the cosmonauts will be there as needed. For this reason, the ROSS will be automated as much as possible; in the absence of the crew, the life support systems will be turned off, which will reduce the cost of its maintenance and service.

All this sounds very reasonable. However, a number of interesting points raise legitimate questions.

At first, if you look at the comments, then the vast majority of Russians are perplexed why do we need our own orbital station at all? On the ISS, Europeans and Americans at least conducted serious scientific research in the field of astrophysics and microgravity, high-tech materials and biological preparations, and studied the possibility of long-term space flights. Will Russian science pull all this on its own orbital station? Not known.

Secondly, the orbit on which the ROSS should be located is interesting. It will be located at an altitude of 300 to 350 kilometers, and its inclination to the equator will be 97° (for comparison, the ISS and Mir have about 52°). This will allow you to simultaneously survey the entire territory of Russia, but at the same time create a bunch of problems. In the subpolar regions, the level of radiation is much higher, which determines the status of the orbital station as being visited in order to avoid causing harm to astronauts by staying on it for a long time. At the same time, due to such an orbit, a decent part of the payload of launch vehicles launched from Baikonur or Vostochny will be lost.

Weird. Unclear. So many difficulties and limitations in order to be able to continuously control the entire territory of Russia and the Arctic, without obvious scientific benefit?

Perhaps the correct answer lies in the area of ​​dual-use ROSS, which can be used not only for scientific but also for military purposes. There is nothing surprising in this, since space is again actively militarized. So, in 2019, in the hands of journalists of the publication RT I got documentation for a tender announced by the Pentagon:

The US Department of Defense is looking for projects for an autonomous orbital station. The project must support space assembly, microgravity experiments, logistics and storage, manufacturing, training, evaluation testing, payload deployment, and other functions. Projects must be launched into low Earth orbit within 24 months of contract award and have guidance, navigation and control systems for long-term autonomous operation.
Domestic military experts then diverged in their assessments of the project. Some suggested that with the help of the station the group of Boeing X-37 spaceplanes would be controlled. Others did not rule out that the autonomous orbital station could be used by the Americans to deploy strike weapons or elements of a missile defense system.

Returning to ROSS, it can be assumed that, if necessary, a promising Russian station hanging over the Arctic, through which the shortest distances pass for launching intercontinental ballistic missiles, can also be used as a space element of a missile defense system for reconnaissance, missile launch warning, control and target designation. Perhaps to deploy promising anti-missile laser systems and even for strike weapons, if all international agreements on their limitation are finally trampled on by Washington.

Now back to where we started. The Americans extended a hand of friendship to us in space, offering to extend the operation of the ISS until 2030. Probably, they expect friendly responses from us, such as a decision to use ready-made modules not to create ROSS, but to complete the construction of the International Station, which was planned earlier? To then flood it in the Pacific Ocean? Why not a "cunning plan"?

This is a joke, of course. Is it possible to expect such deceit from the United States and such stupidity from our government officials?
Reporterin Yandex News
Reporterin Yandex Zen
50 comments
Information
Dear reader, to leave comments on the publication, you must sign in.