For Russia and against the USA: Germany's fight within NATO continues 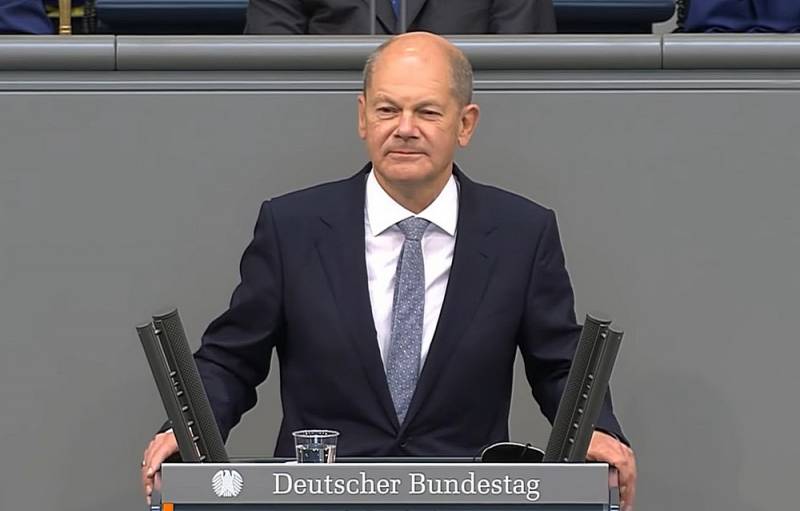 The German government insists that the energy sector of the Russian Federation should not be subject to restrictive measures against the Russian financial sector in the event of an escalation of the situation around Ukraine. This was reported on January 26 by Bloomberg. According to documents obtained by the latter, the German leadership fears that the absence of this exemption from the sanctions list will jeopardize the supply of Russian energy resources to Europe. According to Berlin, the freezing of Russian assets in the EU and the prohibition of transactions with Russian banks can cause significant damage the economy the European Union in general and the German financial industry in particular.


In general, Germany's unwillingness to impose tough sanctions against Russia is not in itself news. Especially considering that its own national interests play a big role in it. It is only surprising that official Berlin has held out for so long. Over the past few months, the United States and its satellites, singing along with them, have been in unison calling on the German leadership to abandon Nord Stream 2, to which they invariably receive the same answer, which de facto boils down to sending to a known “address”. As a result, contradictions between Washington and Berlin are growing within the NATO bloc.

Despite the ever-increasing pressure from the United States and the European Union, Germany stubbornly holds the blow, not wanting to cave in on fundamental issues. Of course, Germany cannot objectively completely refuse to support anti-Russian sanctions due to its membership in the EU and NATO. Nevertheless, the Germans are trying to do everything possible to soften them as much as possible. Moreover, recent events give every reason to believe that it is the German establishment as a whole, and not a specific one, that plays the key role in this matter. political management. For example, last December in Germany not only the chancellor was replaced, but the entire composition of the government coalition. How did this affect German policy towards Russia? Yes, no way: despite the coming to power of the Green Party, which seems to be loyal to the United States, and the appointment of its co-chair Annalena Burbock as head of the Foreign Ministry, the rhetoric of official Berlin has not changed much.

From a diplomatic point of view, official Berlin is playing an extremely subtle game. On the one hand, he regularly agrees with the United States that it is necessary to take sanctions against Russia. As, for example, it is said in the next statement of the representative of the German Foreign Ministry, distributed on January 26:

Western partners are unanimous in their opinion that Russia will pay a high economic, political and strategic price for invading Ukraine.
If we leave aside the issues of wording with supposedly “invasions”, the bottom line is that the German foreign ministry once again limits itself to general words, but not to specific measures, standing in the way of Washington, which is lobbying for the adoption of extremely tough anti-Russian restrictions. At the same time, on the other hand, the leadership of the FRG, by its actions, makes it clear that it will fundamentally not allow itself to decide for itself what exactly the sanctions will be, leaving itself room for maneuver.

It is important to understand that Germany's position towards Russia is not limited to its own economic interests. Germany has clearly taken Russia's demands for “red lines” in the Ukrainian direction much more seriously and is inclined to comply with Moscow's demands rather than Washington's. For example, despite the position of America and a number of NATO countries, Germany flatly refuses to supply weapons to Kiev.

Unlike the US, Britain, Poland and other allies, the German government banned the export of lethal weapons to Ukraine
— according to the publication of the Wall Street Journal, citing sources in the leadership of Germany and Estonia.

The dispute over the export of German weapons arose after Tallinn decided to supply Kiev with 122-mm howitzers produced in the GDR, and after the unification of Germany, they were sold to Finland, from where they already fell into the hands of Estonia. Germany reportedly reserved for itself the right to impose a ban on its export even after resale in the initial sale of arms. As a result, at the moment when the United States called on NATO for unity and a sharp response, and the Estonian leadership, filled with vassal feelings, decided to contribute to the issue of supplying weapons to Ukraine, Germany simply took and imposed a veto, ignoring all the objections of Washington and Tallinn.

However, the United States would not be itself if it had not tried to enter from the other, Kiev, side. On January 25, Ukrainian Foreign Minister Dmitry Kuleba openly addressed official Berlin.

Now, with Germany, we have entered the moment of truth on some fundamentally important issues for the security and future of Ukraine as an independent country and Euro-Atlantic security in general… This is Germany’s support for the most powerful sanctions against Russia, this is Nord Stream 2, this is a matter of arms supplies

In addition, Kuleba added that economic assistance from Germany alone would not be enough. And his words were “reinforced” by the Ukrainian parliamentarians, who sent a letter to the Bundestag demanding to change Germany’s position on the issue of arms supplies to Kiev, noting that Berlin should not only change its policy itself, but also not prevent other European countries from doing so. Otherwise, the Verkhovna Rada threatened, this could lead to the undermining of good relations between Kiev and Berlin.

Oddly enough, but Germany nevertheless gave an answer to all these requests from Kiev. And, it is extremely beautiful. To all the above requirements, as well as to another request from the Ukrainian side to send 100 helmets and body armor, Germany responded by supplying… five thousand helmets. On the one hand, the volume is purely symbolic, on the other hand, who in NATO can now say that Germany stands aside and undermines the principles of the alliance? The formal fact of following the line of the Alliance is - is. So the question is removed. Then you can wait for the shipment of five thousand sets of underwear. Exceptionally just in case: if the helmets do not reach Kiev after crossing the Ukrainian border, dissolving in the next muddy schemes.

With all this, official Berlin first of all demonstrates that its real foreign policy doctrine is significantly different from the one that the United States seeks to promote. Germany and Russia have long been known for their close socio-economic ties. And even the Great Patriotic War, which claimed tens of millions of lives, could not destroy the historical relations between the two countries. Today, Russia and Germany are important trading partners that have been developing bilateral business cooperation for years. Of course, Germany cannot yet act as an open ally of Russia, but to some extent what it is doing right now is no less valuable and useful. Cooling down hot Russophobic heads in Europe, striving to cut off arms supply channels to Ukraine, and curbing the aggressive US sanctions policy are already very costly in themselves. That is why Russian-German relations are still at the top of the European political agenda, no matter how annoying the US and its Baltic henchmen. Of course, the struggle against Moscow, fueled by Washington within the EU and NATO, continues. However, for Russia, as well as for all of Europe, it is extremely important that at least someone in the EU still has the strength not only to resist American foreign policy aggression, but also to undermine its initiatives from within.
Ctrl Enter
Noticed oshЫbku Highlight text and press. Ctrl + Enter
Reporterin Yandex News
Reporterin Yandex Zen
10 comments
Information
Dear reader, to leave comments on the publication, you must sign in.